Doctors in India are sounding the alarm over a threat to cancer patients that’s proving deadlier than tumors: untreatable infections from superbugs impervious to existing medications.

Patients undergoing chemotherapy in the country are at the front line of the worldwide spread of bacteria that the most potent antibiotics can’t fight. Bloodstream infections caused by these superbugs have become the leading cause of illness and death in leukemia patients, doctors from India’s top-ranked medical college reported last year.

That frightening reality has forced patients to weigh fighting their deadly malignancies with treatments against the probability of dying sooner from an incurable infection. In India, some 1.7 million receive a cancer diagnosis every year, often leading to chemotherapy that makes them especially vulnerable. Worldwide, at least 700,000 people die annually from drug-resistant infections. That number will balloon to 10 million a year by 2050 and will cost more than $100 trillion in lost economic output without corrective actions, according to a U.K. government study, which estimates that by midcentury more people will die from superbug infections than from cancer and diabetes combined.

The threat of antibiotic resistant bacteria is a growing relentlessly which makes the drive to come up with effective treatments all the more urgent. Strides are being made in understanding how to combat the threat but everyone knows of someone who has contracted an infection in hospital at this stage. The problem is likely to get worse before it gets better. 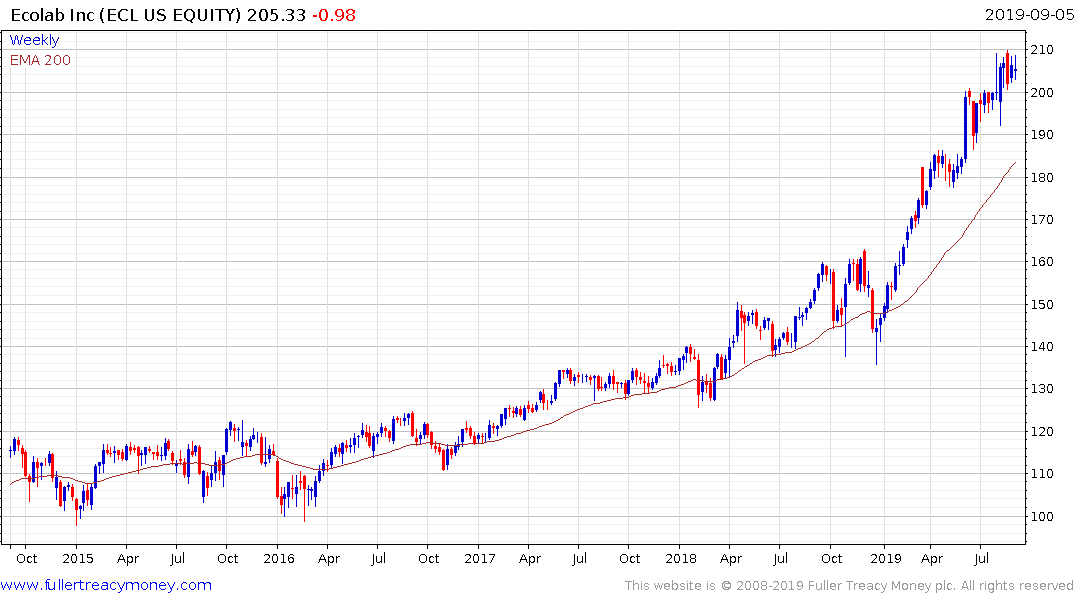 Ecolab’s acquisition of UK-based Bioquell in January suggests the companies is approaching the issue from the disinfectant rather than cure vector. The pace of the share’s advance has picked up considerably since January and it continues to hold a sequence of higher reaction lows.