Johnson Has a Big Brexit Problem: His Northern Irish Friends
Comment of the Day

Johnson Has a Big Brexit Problem: His Northern Irish Friends by Eoin Treacy

“None of our 10 members will vote for a border in the Irish Sea,” Ian Paisley, son of the party founder and one of its MPs, said in a RTE interview late on Monday, accusing the Irish government of stirring the “sleeping giant” of unionism.

At the same time, he said “we can all be happy -- this doesn’t have to be quid pro quo where if we gain, the Republic of Irish loses.”

Under Johnson’s original plan, Northern Ireland -- the region the DUP draws its lawmakers from -- would leave the EU’s customs union and Stormont, the local power-sharing assembly, will have a veto over the future arrangements with the EU.

That plan was shot down by EU officials and the Irish government. Instead Johnson has offered to loosen the Stormont veto and has proposed a complex compromise solution on customs.

This would see Northern Ireland leave the EU’s customs union but still adhere to its rules. Crucially, the rest of the U.K. will leave the customs union and be free to adopt completely new rules after Brexit. That disparity between the freedom that would be available to mainland Britain and the shackles that Northern Ireland would be bound by is unacceptable to the DUP.

Theresa May hamstrung the Brexit negotiations when she failed to gain a larger majority in the snap election she called, which forced her into a coalition with the DUP. The founding principle on which the DUP runs is unwavering commitment to union with the rest of the UK. Visceral objection to any dilution of that link and suspicion of the intentions of every other party is the abiding attitude within the party.

The first principle of democracy is all politics is local. There is just no way Arlene Foster can return to the DUP’s fundamentalist base with a result that weakens the union. Many unionists already believe the Brexit negotiations are a ploy by the Irish government to create a united Ireland. It is hard to argue against that conclusion when one attempts to have some empathy with the unionist position.

The only way that objection can be overcome is if Boris Johnson can cobble together enough votes from other sources to secure a majority. He is charming negotiator but this is a tall order. That means support from every other party including some portion of the Labour party. The latter have no interest in supplying Johnson with a win ahead of a proposed general election. They would much rather a delay from a purely political standpoint. That suggests there is likely to still be a great deal of volatility until a deal is in fact struck and passes Parliament.

The one thing that was readily apparent while I was in the UK last week was how fatigued everyone is at the whole ordeal and how disappointed in the political class most people are. That alone is incentive for the various parties to do enough to set the issue aside. I suspect it is that hope which is sustaining speculation in the Pound. 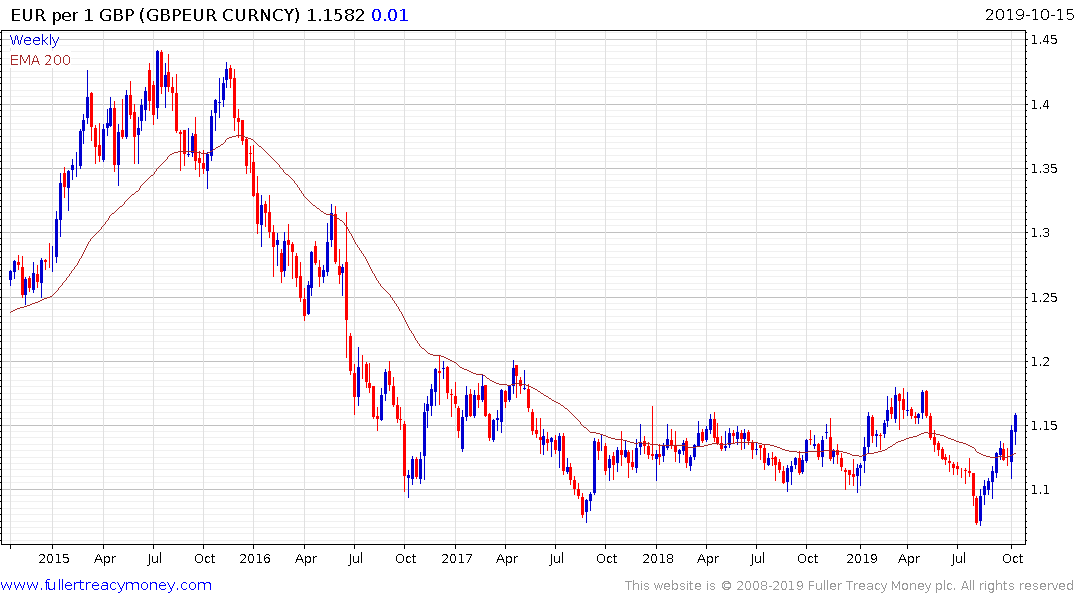 The Pound has returned to test the €1.15 area but is unlikely to sustain moves to new recovery highs without a solid breakthrough in the Brexit saga.