The likelihood of U.S. recession before the 2020 election has grown, based on changes in the Treasury yield curve, according to Jeffrey Gundlach, the billionaire money manager and chief executive officer of DoubleLine Capital.

“We should be on recession watch before the 2020 election,” Gundlach said Thursday in London. “We’re getting closer but we’re not there yet.”

The odds of a U.S. recession before the election are 75%, said Gundlach, whose Los Angeles-based firm oversees more than $140 billion, reiterating a prediction he made in August.

The best signal of a recession is not an inverted yield curve, the money manager said. “It’s the inversion occurring and then going away.”

Yields on 2-year Treasuries exceeded those on 10-years in August, forming an inversion, before flipping back this month.

In other comments, Gundlach said:

* He’s turned “neutral” on gold, one of his previously recommended investments. “It’s had a big run.”

* The U.S. and China are unlikely to reach a long-term trade pact before the presidential election.

* It’s a “terrible time” to bet on U.S. housing and homebuilder stocks because of high inventory and weak demand. 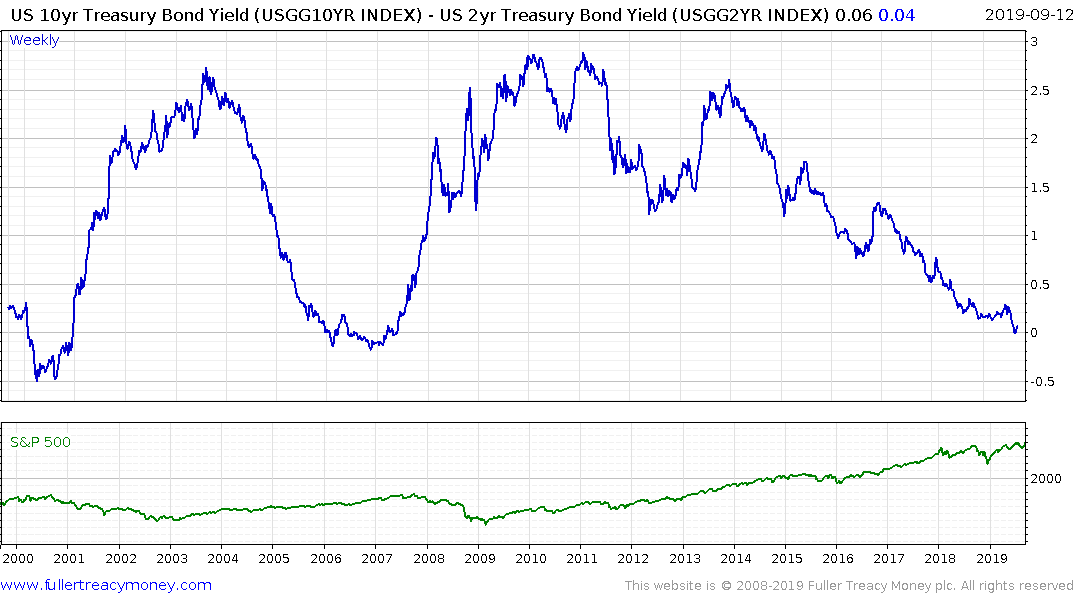 The most important point about the spread in the US market is that it provides anything from a 6 to 18-month lead to the front edge of a recession. That is a wide margin of error and is generally enough time for people to forget about it, moreover because stock markets generally rally almost immediately following an inversion.

The spread’s predicative power takes on urgency when it starts to rally strongly higher following an inversion. That usually corresponds with the Fed aggressively cutting rates in response to clear evidence of a slowing economy. Due to the lagged effect of monetary intervention it is usually too late to prevent the contraction.

The Fed has shown a willingness to pre-empt economic data precisely because it is lagging indicator and because they are eager to prolong the cycle. Nevertheless, I agree with Jeff Gundlach, if the spread begins to rally meaningfully, we need to pay particular attention to the consistency of trends.

I was chatting with the scion of a large real estate family at the club this morning after my spinning class. He said this year has been static in terms of price rises because inventory levels are rising and no one is getting bids over asking. The best markets are apparently still those surrounding Google and Snapchat’s offices near the beach. Rising inventory appears to be countermanding the positive effect of low mortgages rates even as refinancing picks up.