A dramatic day for Japan’s debt market saw yields surge on media reports of possible changes to the nation’s ultra-loose monetary policy, spurring the central bank to offer to buy an unlimited amount of bonds.

The yield on 10-year government securities soared as much as six basis points to 0.09 percent, its biggest increase in almost two years, pulling the yen higher and weighing on stocks. While the yield came down after the purchase offer by the Bank of Japan, it then bounced back to just one basis point below the day’s high.

Any change to BOJ’s stimulus would be the first since 2016 when it introduced control of the yield curve in a bid to manage the impact of its bond purchases and negative interest rates. Still, profits for banks and bond traders continue to be depressed, with reports from Reuters, Asahi and Bloomberg suggesting that officials are debating ways to further mitigate the side effects.

In response to a spike in yields, the Bank of Japan said it would purchase an unlimited amount of 10-year Japanese government bonds if the yield hit 0.110 per cent, above the 0% to 10% range it set in 2016 to support economic growth and raise inflation. It is worth pointing out that it is rare for the Bank of Japan to use such a mechanism to stabilise the bond market and seems to be the latest sign that loose monetary policy globally could be coming to an end. The US Federal Reserve started to raise interest rates last year and began to reduce the size of its balance sheet, while the European Central Bank has signalled plans to wind up its bond-buying programme at the end of this year. However, at its last policy meeting a month ago, the Bank of Japan kept monetary policy on hold. The latter’s posturing had a noticeable impact on global bond markets with the US 10 year yield rising from a low of around 2.84% to 2.95% at the time of writing today (230718)  with the 2s/10s yield curve spread steepening to 32 basis points from its year low of 24 basis points. 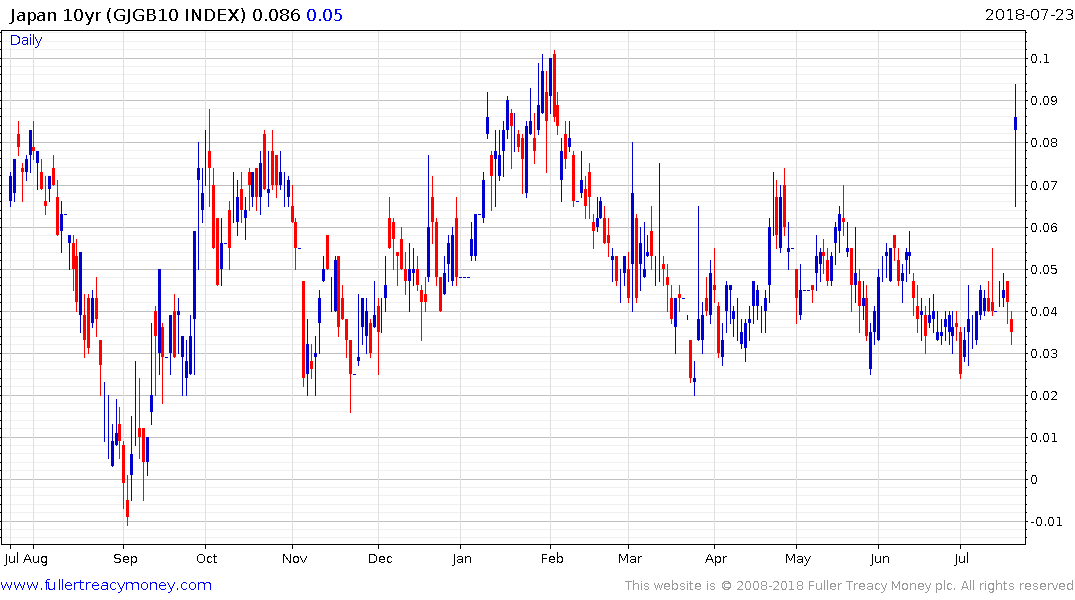 It is a truth universally acknowledged that inflation holds the key to the future direction of Japanese monetary policy. The central bank will not implement any change in its policy without inflationary pressures increasing on a sustainable basis.  As we know, the bank has introduced aggressive and unconventional measures to pull its economy away from deflation since 2013. The policy measures have been unprecedentedly large for an advanced economy, and have been broadened to include purchases of equity ETFs, as well as government bonds. But inflation remains persistently low. As an aside, it is worth noting that in practice, the size of bond purchases has almost halved to around yen40trn annually as the 10 year yield has remained confined within its permitted range. The BoJ has continued to maintain that inflation will meet its objective of exceeding the 2 per cent target by the end of successive forecast periods. However, this aim has not been met and it is likely that at its upcoming meeting inflation forecasts will have to be adjusted downwards yet again. The June core CPI showed that inflation fell to just 0.2%, the third successive downside surprise. As various economists have pointed out, the key reason why it remains stubbornly low is that inflation expectations in Japan seem to be driven largely by reported inflation data on a backward-looking basis and this has held wages down.

The Bank has a dilemma. It is well aware of the harmful side effects of yield curve control on banks and on their ability to make credit freely available given that the shape of the curve is not supportive of bank profitability. Yet consumer prices cannot sustain an upward trajectory. It seems that at its upcoming meeting, the Bank will quite likely push the date of achieving its 2 per cent plus inflation target further into the future an addition to any tweaks to policy. It is imperative that the Bank clearly communicates its intentions to avoid roiling the bond market, thereby unwittingly tightening financial conditions. Next week will be very interesting.