My daughters love visiting Japan. They adore anime and manga, and no they are nor the same thing, I’ve been reminded more than once. They love the cutsie culture coupled with the storytelling and fact that a lot of the topics covered are more mature in nature than they would be conventionally exposed to at home.

In my 10-year old’s class there are two things that every child, regardless of background, intelligence or wit loves; slime and squishes. Slime has turned every girl in the nation into a chemist and our house is full of the products my daughter has concocted from mixing varying quantities of Elmer’s glue and borax and lotion. I’m really hoping that one is a phase, the stuff is gross to my eyes. The other thing they love are Squishies. These are what many of us might think of as stress balls. The most popular are Japanese because they are of higher quality and return to their shape slowly. If you can bare it simply plug Squishies into YouTube.

Squishies, anime and manga, robotics and a range of other genres highlight the fact that Japan is still capable of capturing the imagination of popular culture. Against that insight more than a few people told me that the country is managed for old people. It is a common sight to see nonagenarians being wheeled around by their sexagenarian offspring. Massage and pain treatment for backs, necks and knees are some of the most common store fronts. Something politicians and the general public are only beginning to get grips with in Europe and North America is that older people are reliable voters and are jealous of their pensions and senior perks.

Amazon has a growing franchisee in Japan but the collapse of the high street shopping experience we’ve witnessed elsewhere is not evident, at least not yet. This is also something I have noticed in other Asian countries as well. Hong Kong, Singapore, Japan all share one common characteristic. Generally speaking housing units are small so it is just easier to avail of the environment provided by shopping malls. That creates something of a captive audience for retailers. Meanwhile everyone is familiar with the international footprint of 7-Eleven. Lawson shares commonality with it but Familymart appears more popular and their share prices confirm they offer the convenience store experience people in residential communities’ desire. 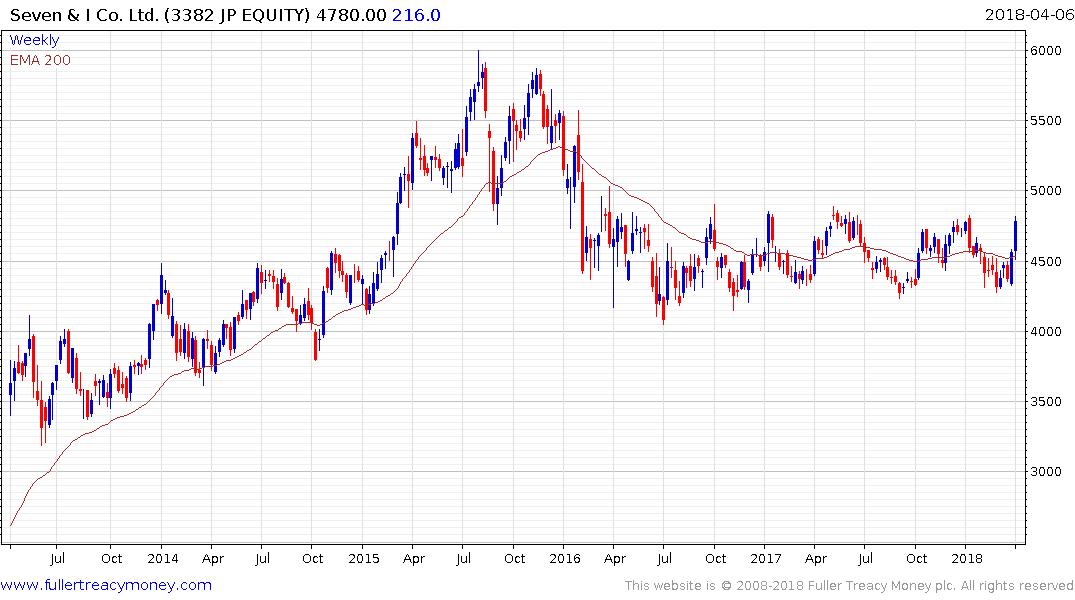 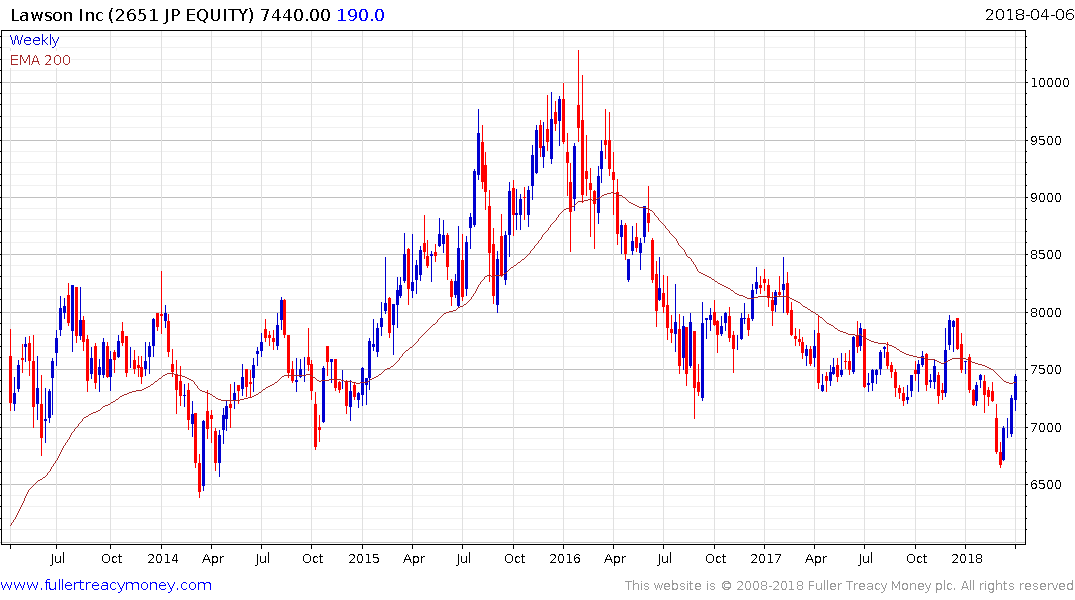 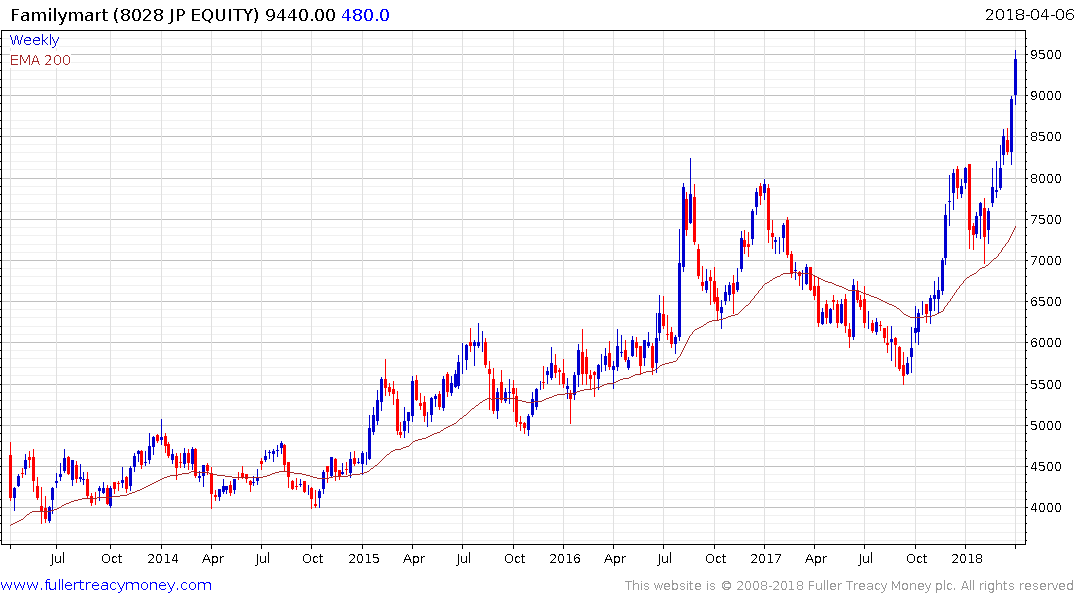 I don’t have a long experience visiting Japan but something that really struck me last year and again this year is the variety of sweets on offer. That is quite distinct from other parts of Asia where confectionary sales are growing from a low base but are still nowhere near approximating demand elsewhere. The only other places I have seen such a wide and pervasive supply of different confectionary for sale are Ireland, the UK and the USA. Sugar is an escape or addiction in much the same way that smoking and alcohol are. Japan also consumes copious quantities of both cigarettes, beer and whiskey. I wonder whether this demand for sugar was as common in the 1980s or whether it is a reflection of the deflation in living standards seen over the last forty years. 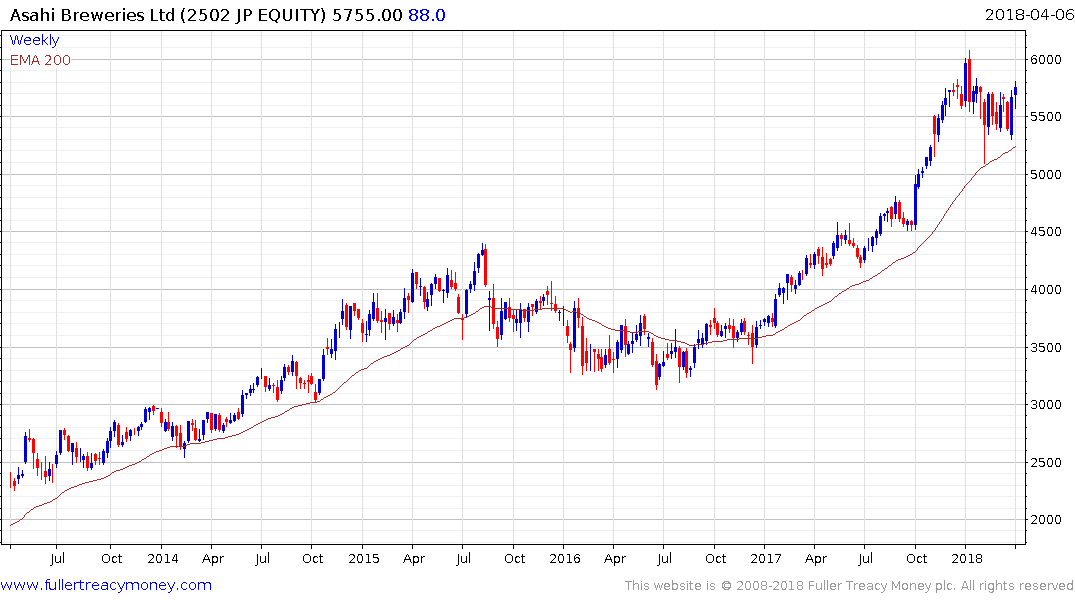 An almost 40-year period of deflation and false starts is not something you just wake up from. It changes people and it changes culture. Japan needs nursing staff and there are immigrant visas now available for people willing to work as carers. We met more than a few Chinese working in convenience stores. The onsen hotel we stayed at had a substantial number of Korean trainees. There is an Indian language music station on the radio. That challenges the view that Japan discourages migration. There is no denying that Japan engages in immigration but does so on its own terms and the trend so far has been modest. That could easily change as the population ages and the requirement for assistance grows more urgent.

Another point Mrs. Treacy and were discussing is the number of women doing physical jobs. The porters at two of the hotels we stayed at were all women and they were expected to lift heavy bags. There are beer delivery workers moving kegs and many female teppanyaki and sushi chefs. I think it is unlikely the MeToo movement is going to take hold in Japan but there is no denying that women are tasked with a lot of the menial work while men tend to continue to occupy dominant business and social status.

The other thing that really struck me is the prevalence of paper. At the car rental counter, the bank and other offices everything seems to be printed off in triplicate. Japanese is a unique language so there is not the same number of programmers targeting the market as there is for English of Chinese nevertheless, many people use WhatsApp and WeChat. However there seems to be a lot of duplication of processes amid a rigid adherence to protocol and bureaucracy which is something also evident in places like Germany and the Netherlands but is very obvious in Japan.

Success as an exporter and the focusing on product development rather than process might be behind that kind of corporate culture. Perhaps that is the primary difference between the Silicon Valley mentality and places like Germany and Japan. The former concentrates on new ways of doing things, while the former thinks about new things and both are highly successful. 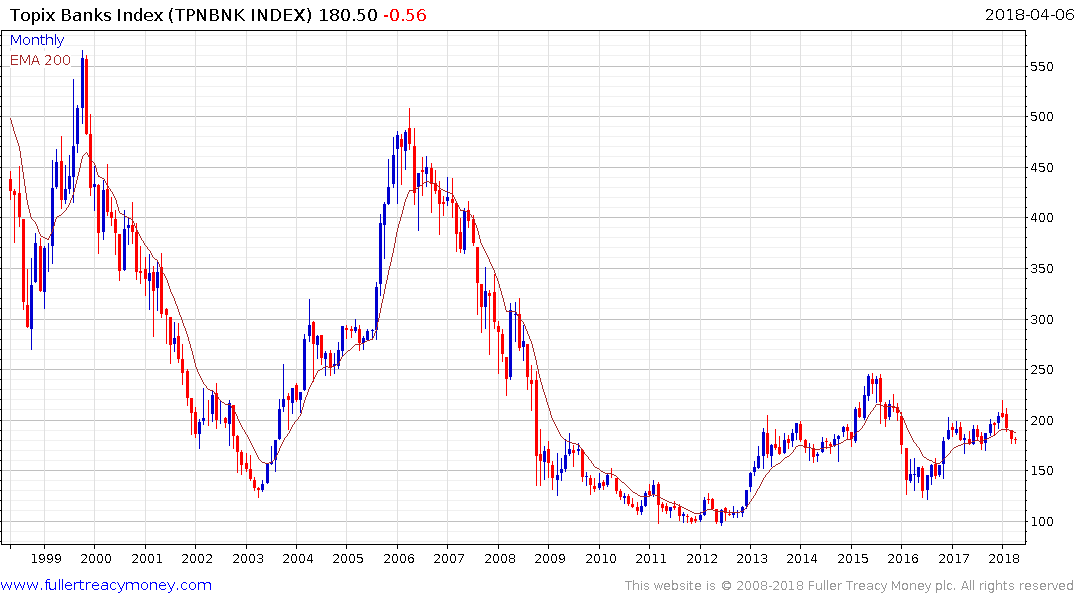 However, the big question is where that leaves the banking sector. Lots of paper requires lots of people. Banking hours are short and it is still considered a good job to work at a retail location. However, the fact is that close to zero interest rates mean banks have had razor thin margins for a long time and the stagnation of the housing market, at least outside Tokyo, is not great for credit growth. Japan needs inflation badly, to shake the inertia of a decades long domestic stagnation. That is exactly the policy the BoJ and Abenomics were designed to pursue.

It has been my hypothesis over the last year that Japan probably failed to ignite inflation following the late ‘80s collapse because the global economy was in one of the greatest periods of disinflation in history. The return to an inflationary bias by the global economy, has the realistic potential to have a knock-on effect for Japan. With such a high degree of commonality in the global sovereign bond markets there it is quite possible that 2018 is the year when yields break out. That was my main concern at end of last year and I think it is still perhaps the most likely of market outcomes this year. 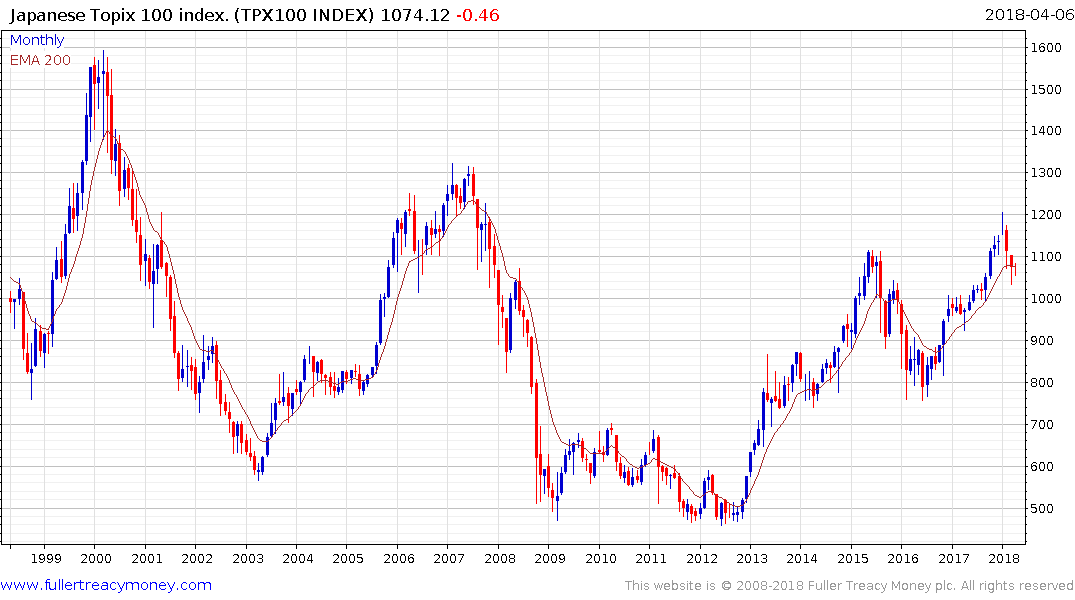 The broad Topix Index and the price weighted Nikkei-225 average have both broken out to new recovery highs over the course of the last year and have pulled back to test their respective trend means over the last month. There is tentative evidence support has been found at these important technical levels. 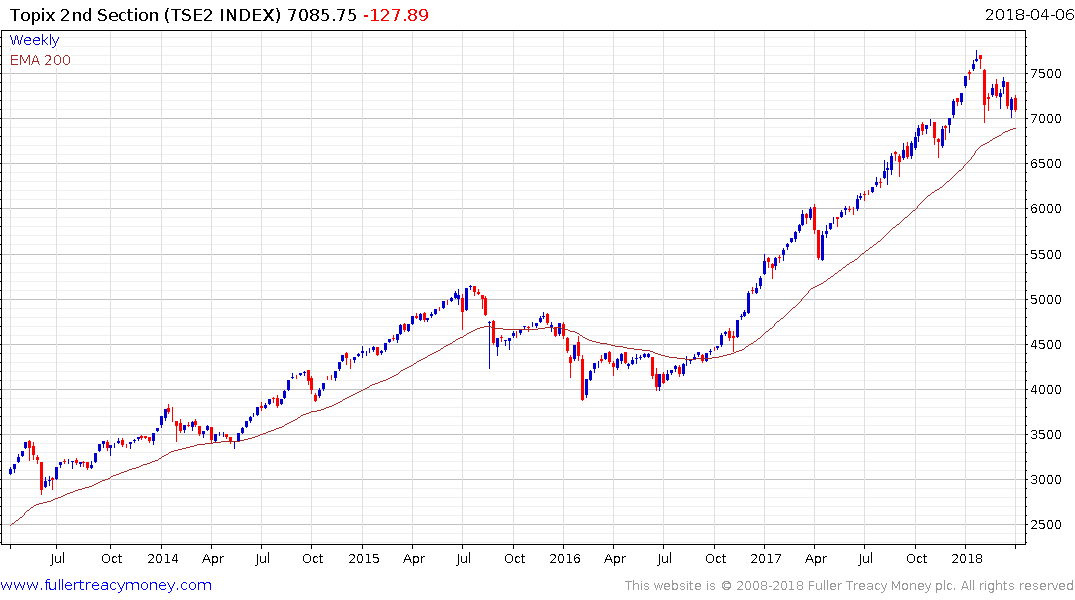 The Topix 2nd Section Index which is generally comprised by smaller companies has been a lead indicator for the Japanese market over the last decade at least. It is also back testing the region of its trend mean.

I was particularly happy to see that Waze works very effectively in Japan and made driving rather easy. If I’m honest I got a kick out of the mixed emotions on the faces of other drivers seeing a white guy behind the wheel.