“We’ve had the knee-jerk reaction to no change as the majority expected some form of action,” said Cameron Duncan, Sydney-based co-head of income strategies at Shaw and Partners, which manages the equivalent of $7.6 billion. “In, hindsight, it’s probably consistent that they haven’t done anything because they eased three months ago.

There’s typically a lag in terms of response to that sort of easing. It’s the Bank of Japan and they’re pretty conservative and they are still waiting to see what the impact of that is.”

Goldman Sachs Group Inc. and HSBC Holdings Plc were among those expecting the central bank to add to ETF buying. Goldman Sachs estimated the BOJ would expand annual purchases to 7 trillion yen, while HSBC predicted an increase to 13 billion yen.

The central bank’s decision to forgo additional easing this time hasn’t deterred some from expecting more stimulus in the future. It’s inevitable that economic growth and inflation will take a downturn and given the outlook for a stronger yen, the BOJ will likely boost stimulus eventually, SMBC Nikko Securities Inc.’s chief market economist Yoshimasa Maruyama said.

Driven to Ease
“The situation the BOJ is in won’t change for the better because of its decision today,” Maruyama wrote in a note to clients. “It’ll be driven into easing further sooner or later.”

The Topix is down 13 percent this year, making it the worst performing developed market in 2016, after starting 2016 tumbling into a bear market on worries over oil prices and slowing global economic growth. The measure has climbed back 12 percent from a Feb. 12 low, bolstered by a recovery in oil prices and signs of stabilization in China’s economy.

“If you’re going to go, go big” was something the BoJ appeared to have understood when it adopted the QE program that sent the Yen down more than 50% and ignited a major run in Japanese stocks between late 2012 and early 2015. Since the middle of last year the commitment to doing everything necessary to ignite inflation has waned. The wait and see attitude adopted of late suggests a lukewarm commitment to reform and expansion.

The problem for Japan is that it needs to ignite inflation and growth to justify the monetary expansion it has embarked on because it has the highest debt to GDP ratios of any major economy. Buying JGBs when every issue up to maturities of 10 years are on negative yields is the equivalent of giving money to bonds investors because the central bank is sure to take a loss when the bonds mature. However that is not how investors playing liquidity look at the policy of negative rates. Leverage needs a steadily increasing flow of money creation to sustain momentum moves and that has been absent over the last year. 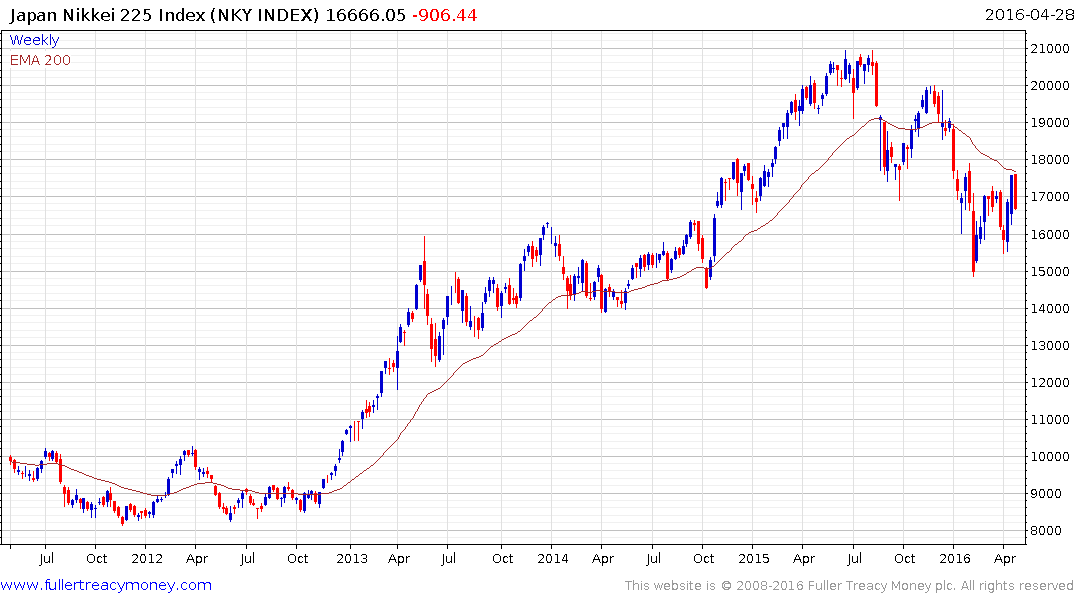 Today’s downward dynamic on the Nikkei confirms resistance in the region of the trend means and the medium-term progression of lower major rally highs remains intact. A sustained move above 17,700 will now be required to question medium-term supply dominance. 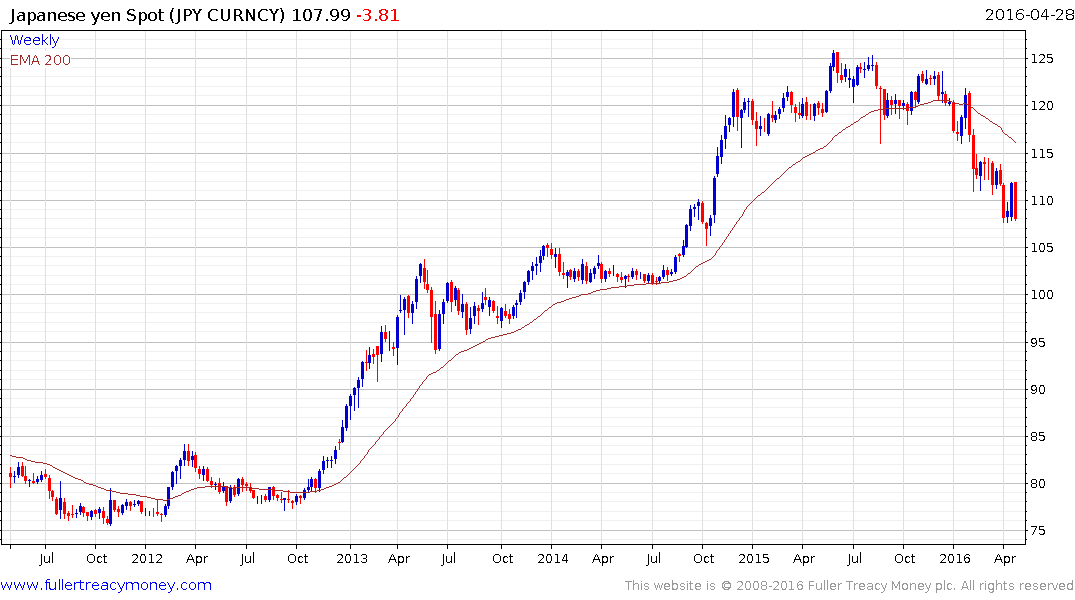 Given the BoJ’s slapdash approach to monetary policy there is every possibility that additional QE will be announced in future but the consistency of the trend has deteriorated suggesting the investment environment is likely to remain difficult.