“The data suggests there are some structural issues at play,” Daiwa SB’s Monji said. “Maybe the weak export numbers are because of Japan lacking competitiveness abroad. It’s negative for the market.”

Nikon sank 2.6 percent to 1,616 yen. JPMorgan reduced its rating on the stock to underweight from neutral, citing high costs and downside risks to existing businesses in the camera maker’s plans to increase its medical business sales.

Even after a 8.6 percent rebound from its May 21 low, the Topix is still the worst performer this year among 24 developed markets tracked by Bloomberg. The measure capped a world-beating rally last year as the central bank pressed ahead with record monetary easing.

Japan was one of last year’s early leaders but is today trading around the same level as when it hit a medium-term peak in April 2013. This ranging consolidation has resulted in a period of underperformance, not least against the USA and Europe and caused investors to question the fortitude of Mr. Abe’s administration in implementing his three-pronged reform agenda. 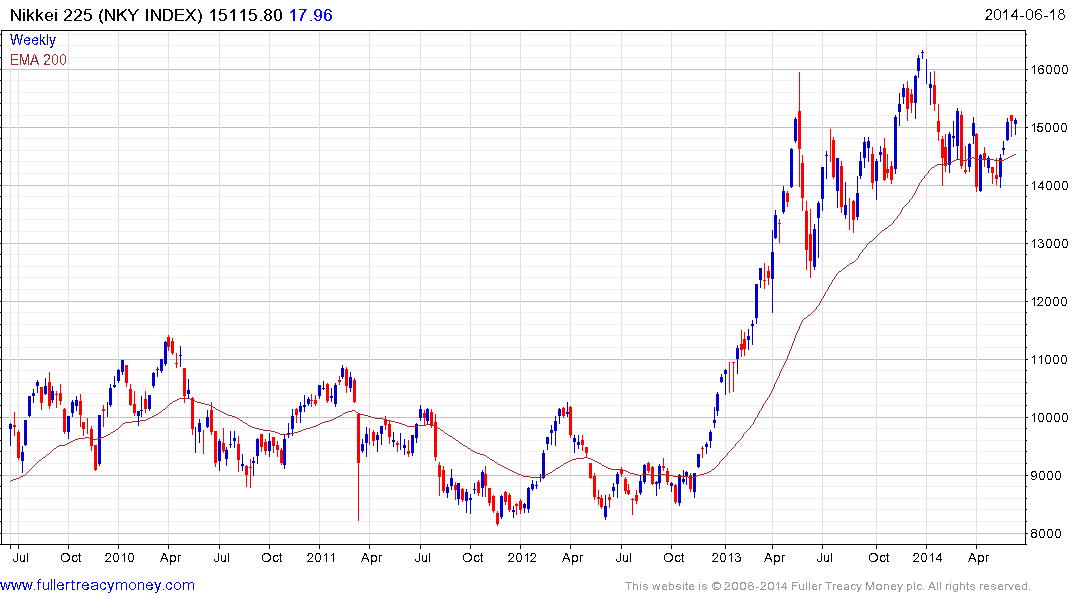 The price action suggests this reasonably lengthy period of underperformance may be ending and that Japan is unlikely to finish the year as the worst performing developed country stock market.

I thought it might be interesting to review a number of the better performing Japanese funds: 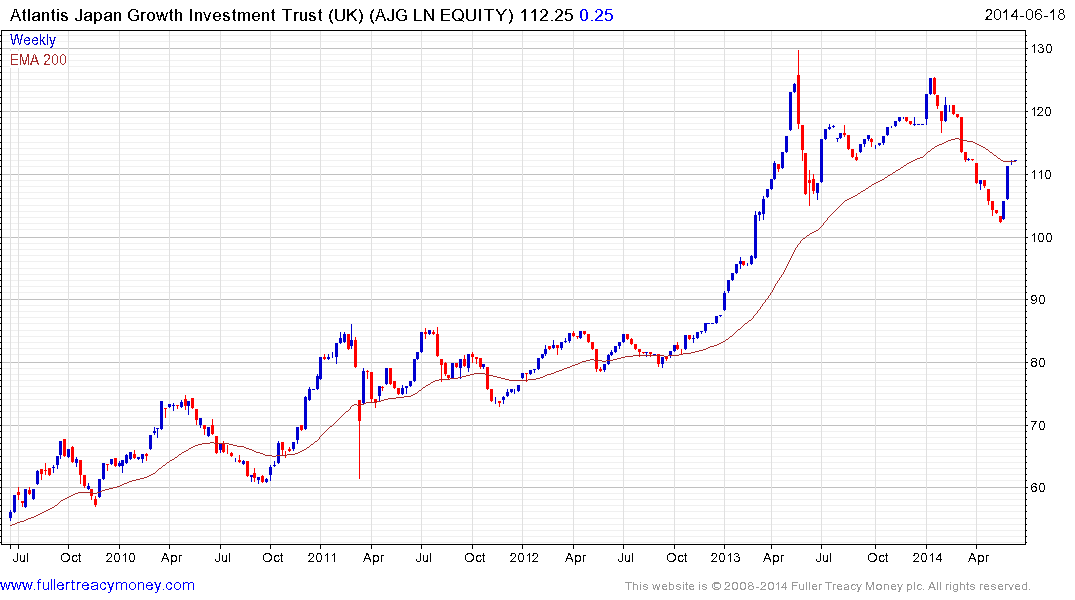 The UK listed Atlantis Japan Growth Trust is trading at a discount to NAV of over 9% and is currently rebounding following a steep decline from January. The trust would need to sustain a move below 102p to question potential for additional higher to lateral ranging. 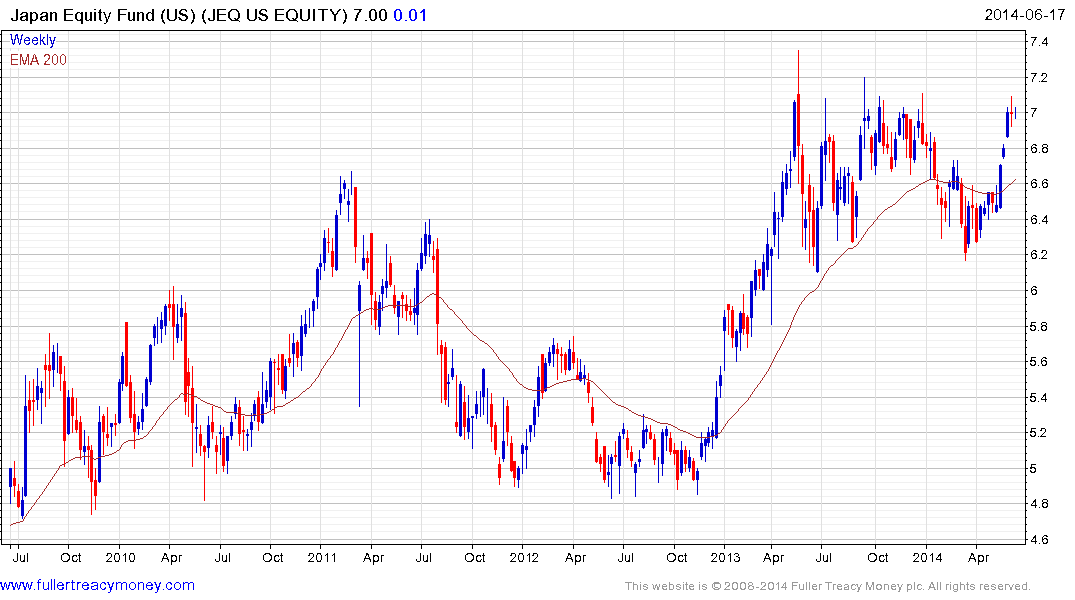 The US listed Aberdeen Japan Equity Fund trades at an 11.28% discount to NAV and has been ranging for more than a year. It is currently testing the upper boundary near $7.20 and a sustained move above that level would reassert medium-term demand dominance. 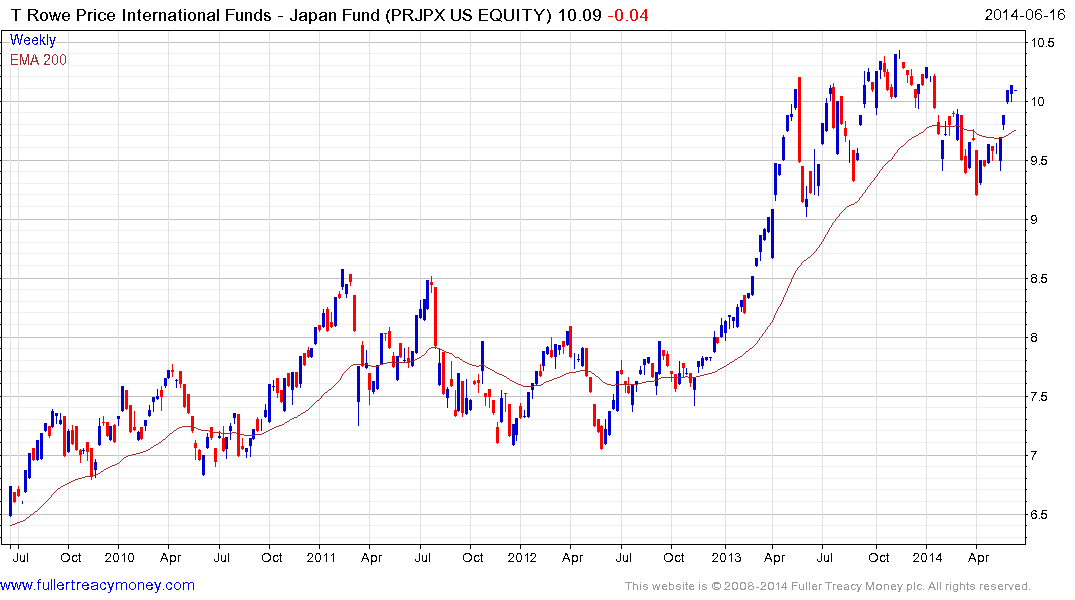 The T.Rowe Price Japan Fund has a similar pattern. 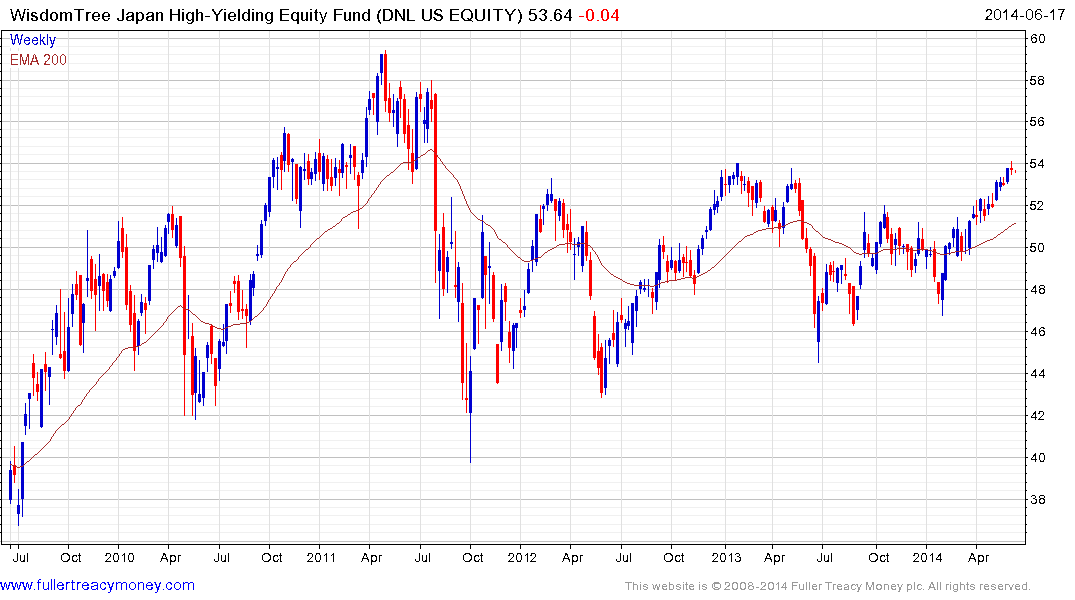 While the WisdomTree Japan Hedged ETF (DXJ) was among the most popular Japan funds last year, the WisdomTree Japan High Yield Equity Fund has outperformed more recently. It has been ranging with a mild upward bias for 30-months and is now testing the upper boundary. Some consolidation in the current region looks likely but a sustained move below $62 would be required to question medium-term scope for a successful upward break.