The company will issue no more than 1.67 billion shares in China, equivalent to 5.5% of the total outstanding before the greenshoe, according to its prospectus on the Shanghai stock exchange. It will issue the same amount for the Hong Kong offering, or about 3.3 billion shares in total.

Alibaba Group Holding Ltd., which was co-founded by Ma and currently owns about a third of Ant, has agreed to subscribe for 730 million of the Shanghai shares, which will be listed in Shanghai under the ticker “688688,” according to the prospectus. Alibaba will hold about 32% of Ant shares after the IPO.

AliPay prospered by offering a higher interest rate than banks which was earned daily. That sensation of seeing one’s balance increasing by the day, even if only by a small amount, drove massive consumer adoption. The reason it was able to circumvent strict banking regulation on how much interest can be paid was because the government was willing to look the other way by not insisting on a banking license.

The absence of overt regulation has allowed China’s fintech sector to grow much quicker than anywhere else. It has served the dual purpose to unlocking consumer spending potential, demonetizing the financial system and setting the stage for the introduction of a digital currency. 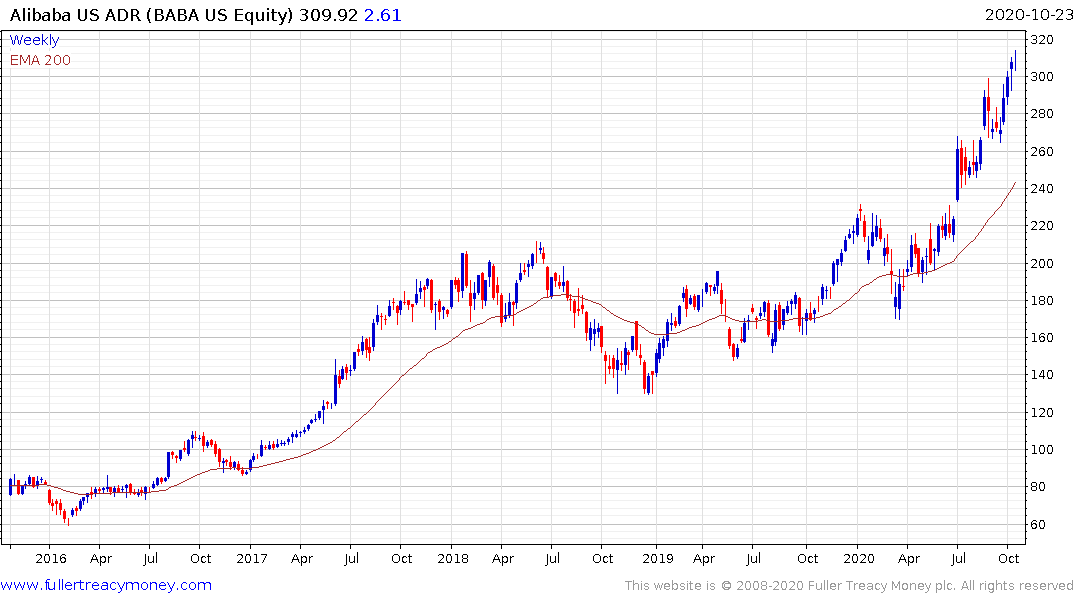 Alibaba spent six months forming a first step above its underlying range and broke out in July. While overextended in the short term a break below HK$250 would be required to question medium-term scope for additional upside. 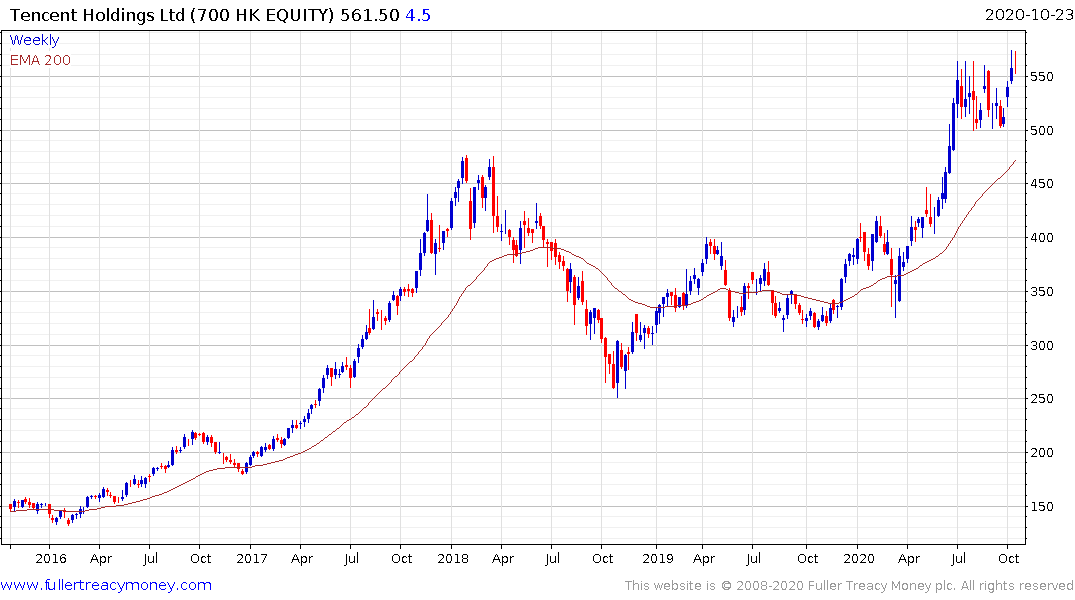 Tencent broke out of a three-month range two weeks ago and a sustained move below the trend mean would be required to question medium-term scope for continued upside.

This report from GavKal focusing on the determination of the Chinese to circumvent international finance structures through the introduction of a digital currency based on the size of its fintech market may also be of interest. Here is a section:

Could it be that we find ourselves looking back at this year’s IPO for China’s Ant Technology Group, together with the drive by the People’s Bank of China to launch a digital renminbi (see Questions On The Digital Renminbi), as the start of a new era? An era when, all of a sudden, consumers and companies across the emerging markets no longer needed to use the US dollar, nor even the SWIFT system, to trade with each other?

Just as Apple did not try to compete with Microsoft for what was seen then as the core tech market-the large corporate IT budget—but instead focused on the high-end consumer, today’s Chinese fintech companies have little interest in grabbing a share of large corporate transfers and becoming big players in the US-dominated SWIFT system. Instead, like Apple, the two Chinese fintech giants Alipay and WeChat Pay are focusing on going directly to the consumer (see the great research on China fintech from our colleagues at Gavekal Fathom China).

And like Apple, they are attempting to establish a new, parallel operating system, by helping Chinese consumers (and increasingly consumers in other emerging markets) with payments and cash transfers (bypassing SWIFT and US control), by providing micro-loans (that are growing like weeds, bypassing the traditional banking system), and by offering savings products (mostly money market funds) and insurance policies (that again completely bypass traditional methods of delivery).

The level of control and the lack of easy ways to monitor supply increases afforded by the introduction of digital currencies have obvious attractions for central banks and governments. By excising cash from the system, they gain much greater control over the economy. They also have much more powerful tools of expropriation should the “need” become essential.

The bail-in of depositors in Cyprus being the most recent relevant example. Considering the absence of a backlash that move incurred governments have been emboldened to pursue digital currency initiatives and this is a trend that is well underway. Stories like this one, which highlight that Italy’s shadow economy is the same size as all of Portugal’s one support the view cash needs to be removed from the system.

Here is a section from a report from DoubleLine that may be of interest:

Let me quote again from Charles I. Plosser’s warning in 2012: “Once a central bank ventures into fiscal policy, it is likely to find itself under increasing pressure from the private sector, financial markets, or the government to use its balance sheet to substitute for other fiscal decisions.” With a flick of the digital switch, CBDCs can enable policymakers to meet, or cave in to, those demands – at the risk of igniting an inflation conflagration, abandoning what little still survives of sovereign fiscal discipline and who knows what else. I hope the leaders of the world’s central banks will approach this new financial technology with extreme caution, guarding against its overuse or outright abuse. It’s hard to be optimistic. Soon our monetary Pandoras will possess their own box full of new powers, perhaps too enticing to resist.