J.P. Morgan Early Look at the Market
Comment of the Day

J.P. Morgan Early Look at the Market by Eoin Treacy

What happens going forward?  The SPX has now pulled back ~4.5% from the recent peak at ~2940 and the risk/reward is turning more attractive than it was at the end of Sept.  Assuming a 2019 EPS number around ~$178, the PE is back under 16x and undemanding (17x would put the index up around ~3K, or 7% higher from present levels).  Meanwhile, for the first time in a while investor anxiety is palpable as panic levels rise (the initial part of the SPX slump in the first several days of Oct were quite calm and orderly but that changed Wed).  The recent spate of profit warnings (the highest profile one was PPG but a number of other firms, including TSE and VAT Group, also cut their guides in the last 48 hours) isn’t encouraging while the steep declines following reports that were far from horrible (FAST and LVMH) signals fragility on the eve of the CQ3 season but expectations have been knocked down over the last few days (and the sample size of reports/warnings is far too small to extrapolate to all of Corporate America).

The “Big 3” macro overhangs are still outstanding (US-China trade, Italy, and TSY yields) although (like earnings) the narrative around each of these topics has turned quite bearish of late.  At this point US inflation will have to spike meaningfully to drive yields much higher (the CPI Thurs morning will be a crucial data point) while US-China trade headlines are more likely to positively surprise at this point (although for now the tenor of news is still unhelpful, as evidenced by the late-day NYT headline https://nyti.ms/2OjVQ82).

Bottom Line: sub ~2800 provides solid valuation support (assuming the $178 ’19 consensus isn’t slashed).  Keep in mind certain sub-groups, like cap goods/autos, have been trading horribly for several days (it was only when tech really cracked that the SPX sank) and it will be these sectors that will likely lead on the upside during any rally (along w/possibly the banks).  Tech is probably going to be in the penalty box for the time being; the tech narrative is starting to quietly shift at the margin – whereas before any dip was considered a chance to buy, now rallies will be looked at as opportunities to book profits.

What happened Wed?  Stocks suffered an enormous decline due to rising earnings doubts coupled with unresolved macro headwinds.  Markets have grappled with a number of macro overhangs for weeks (Italy, US-China trade, TSY yields, etc.) but the CQ3 earnings season was always expected to be a strong one.  However, cracks in the earnings façade have formed of late following some profit warnings and underwhelming reports (including DLPH, LVMH, PPG, TSE, VAT Group, and more).  Thus the Wed SPX slump was a function of a toxic mix of micro and macro problems.

There is no one factor that investors can point to that offers a clear reason for why the market pulled back so sharply on Wednesday. Instead a confluence of events triggered stops which has resulted in a significant number of US large cap shares closing what were somewhat overbought conditions relative to their respective trend means. 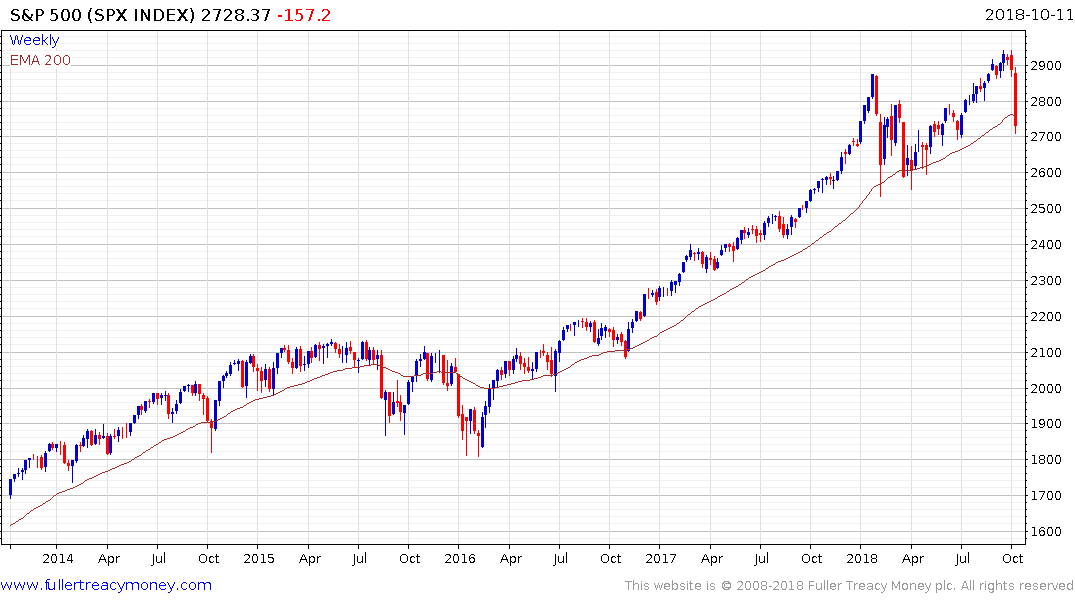 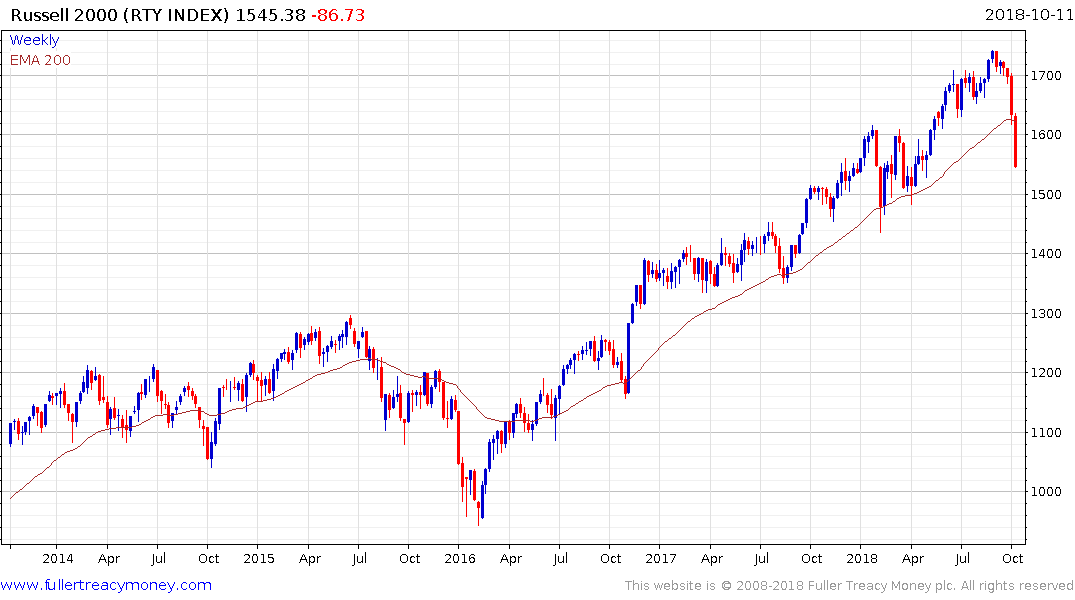 However, what is important right now is the Russell 2000 which exhibits a short-term oversold condition but is below its trend mean and needs to bounce in a dynamic fashion to confirm a return to demand dominance.

Leaders lead on the upside and the downside and they lead for a reason.  The small to mid-cap sectors have been among the best performers over the course of this bull market not least because they are less leveraged to global growth and more attuned to the influence of loose monetary policy. With quantitative tightening an increasing headwind, the health of the broad market, beyond the performance of mega-caps, is a significant lead indicator for the wider market. 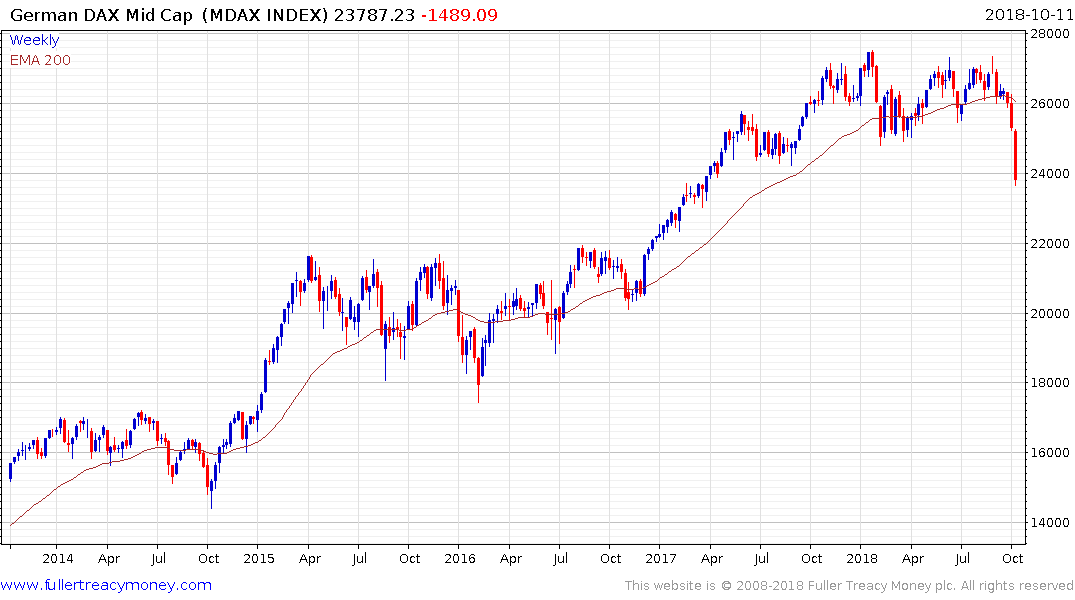 The MDAX in Germany broke downwards from its most recent range this week. This is now the first time it has spent some time below the trend mean but on each previous occasion it has rallied back above it in an emphatic fashion. 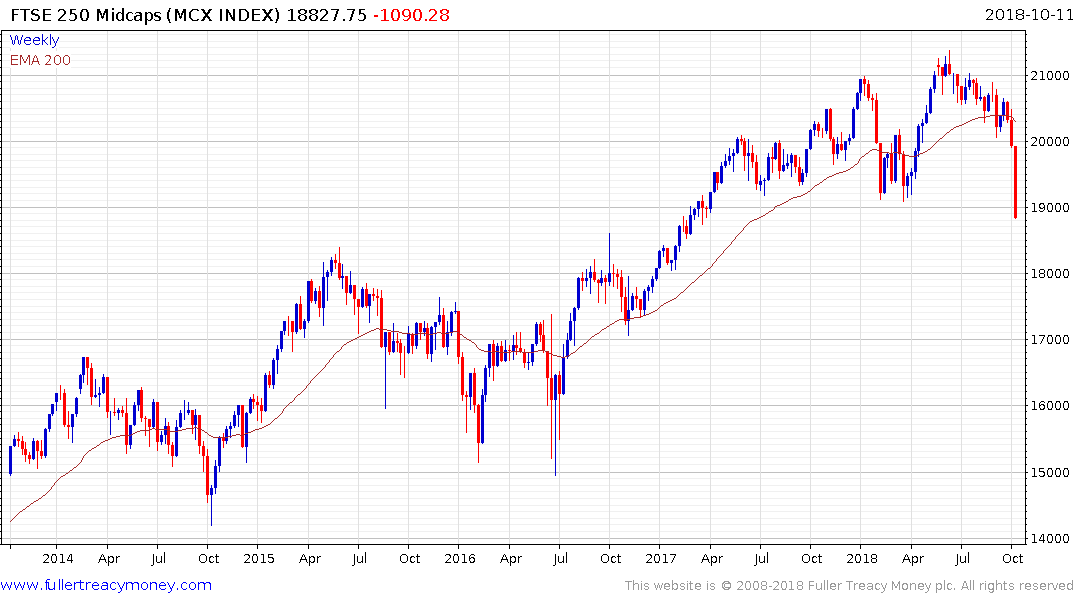 The FTSE 250 Index dropped downwards to a new reaction low today and a clear upward dynamic will be required to check momentum beyond a pause. 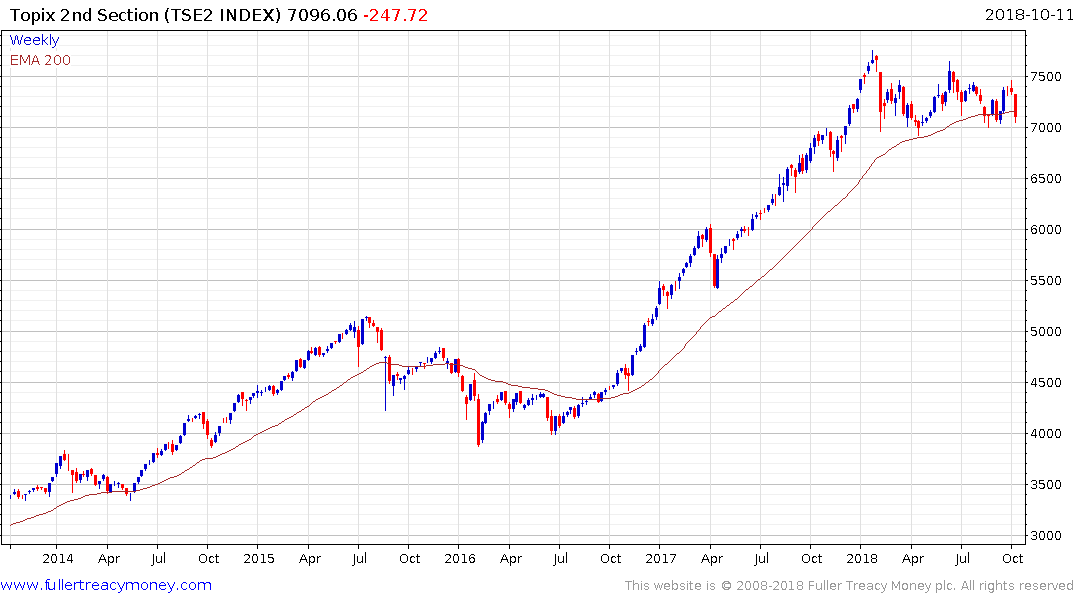 The Topix 2nd Section Index is back testing the lower side the range which has been forming since January and needs to hold the 7000 level to defray top formation characteristics. 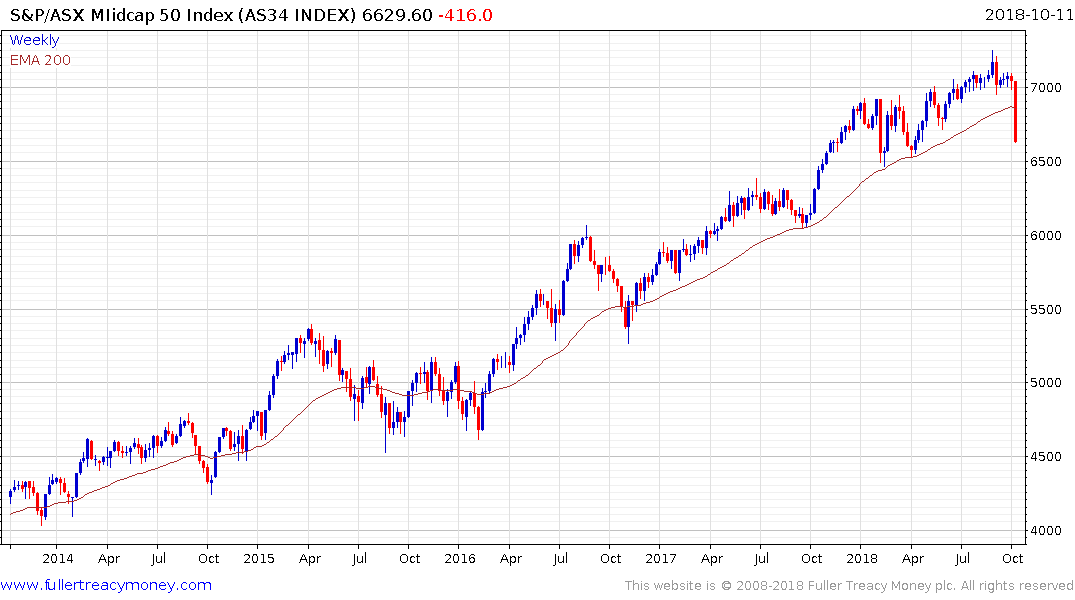 The S&P/ASX Midcap Index has also pulled back in a dynamic manner this week and will need to sustain a move back above the trend mean to signal a return to demand dominance.

The commonality in the underperformance of interest rate sensitive markets like midcaps points towards investors beginning to price in the tightening of credit conditions.