The wider deficit forecast could revive tensions with the Commission after months of wrestling at the end of 2018 which resulted in a promise from Italy to stick to a deficit of 2.04 percent of GDP. With growth lower than expected, the money to keep the promise isn’t forthcoming. Nor is the government keen on measures that would dampen growth, with Finance Minister Giovanni Triastating recently that restrictive fiscal moves would be “absurd.”

Italy stocks extended losses after the report, with the FTSE Mib index down 0.4 percent at 3.00 p.m. in Milan. The spread between Italian and German 10-year bonds widened by 4 basis points.

"The deficit is the most thorny issue for Italy and could spark tensions with the European Union," said Vincenzo Longo, an analyst of IG Markets in Milan. "We are expecting negative growth in the first part of the year and the numbers the government is going to debate seem too optimistic. The government isn’t likely to push the issue however until after the European vote in May."

The fiscal austerity program the EU is abiding by is designed to harmonise government debt to GDP ratios ahead of introducing pan European institutions like a deposit insurance corporation and a federal transfer mechanism. It offers no leeway for subpar economic growth which is what Italy is dealing with at the moment. That represents a significant challenge for the system because it greatly increases the potential for rebellion. 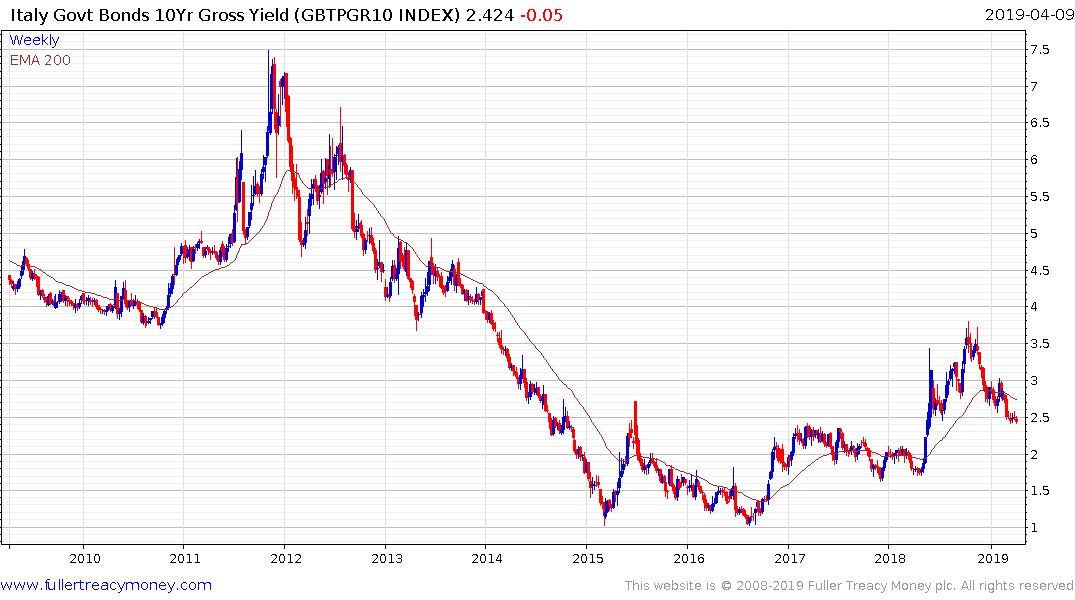 Nevertheless, upstart populist administrations in Greece and Italy have, so far, proved to be toothless in their threats to upend the fiscal austerity regime. In fact, the Italian coalition was quickly subdued by yields on 10-year BTPs moved above 3.5%.  Since their acquiescence the yield has contracted steadily and is now below 2.5%.

The pressure peripheral nations have come under as a result of fiscal austerity has been a determining factor in the inability of the ECB to raise rates and in its willingness to pursue quantitative easing. A distinct absence of inflation holds out the prospect of additional stimulus over the next year. 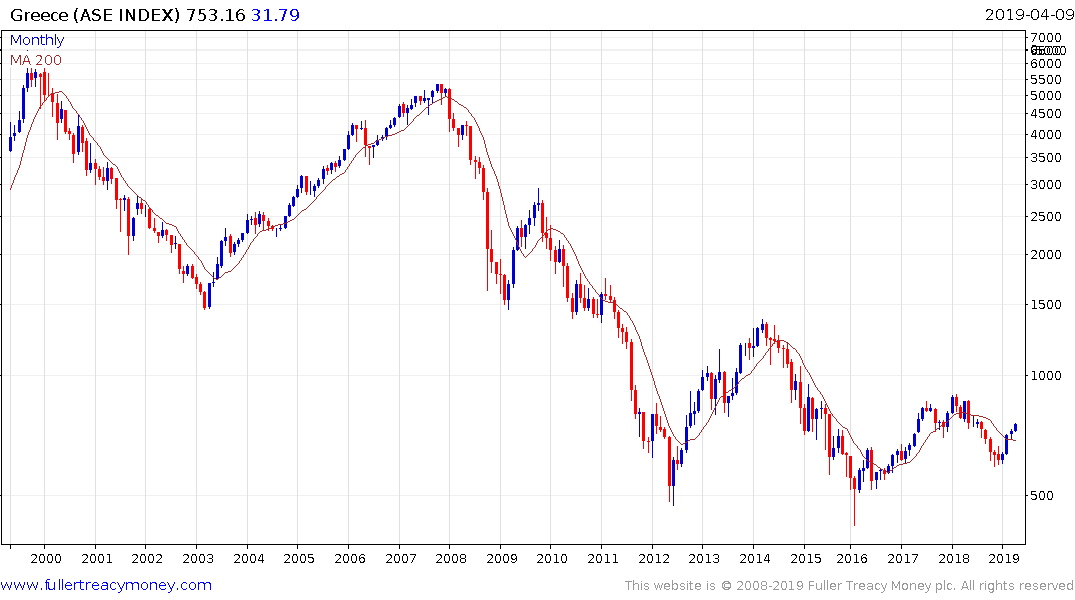 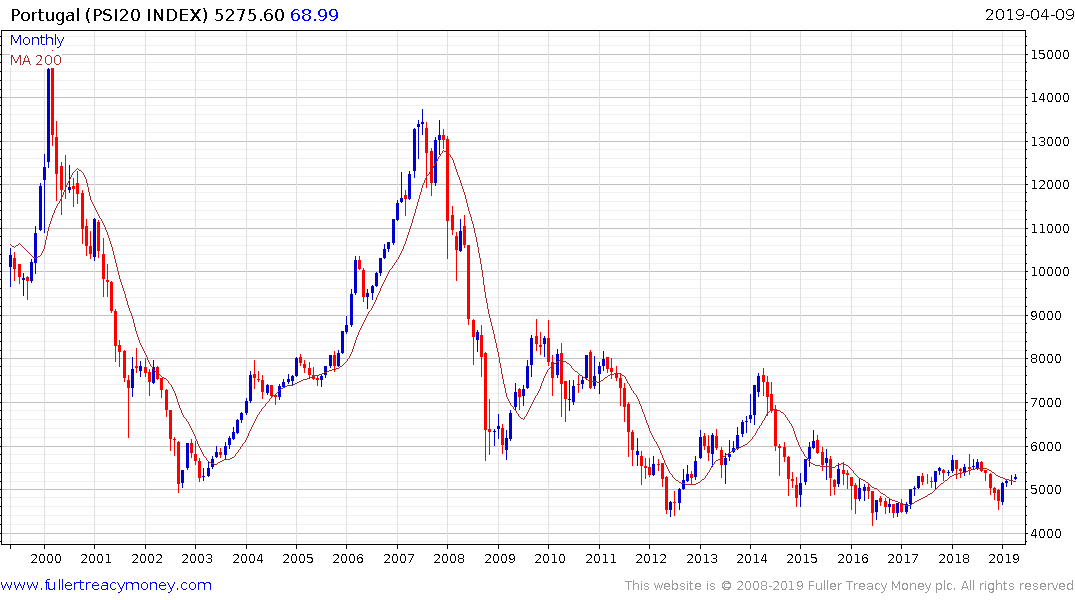 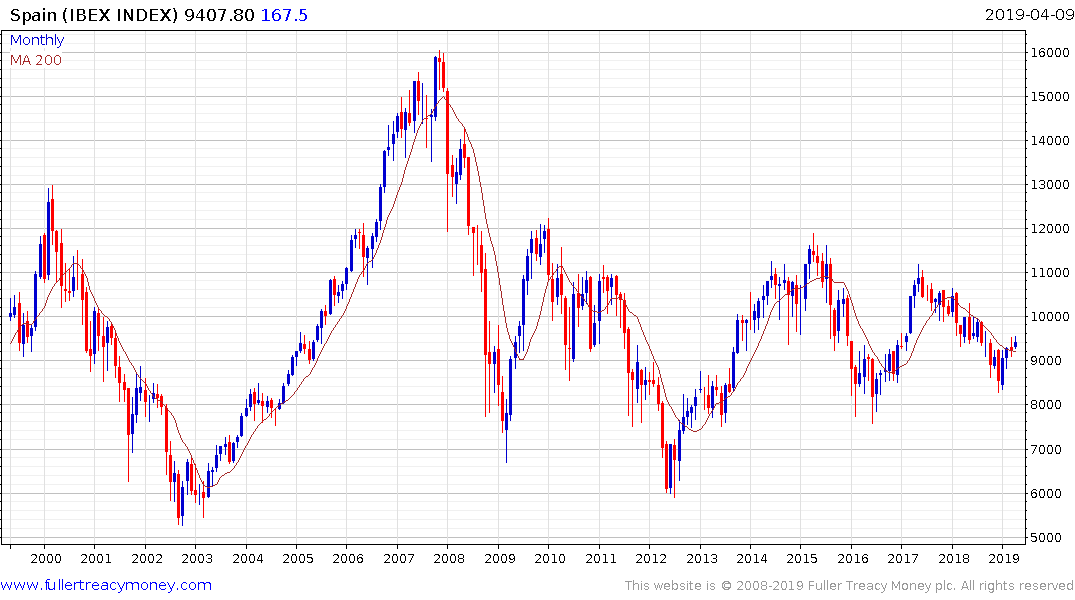 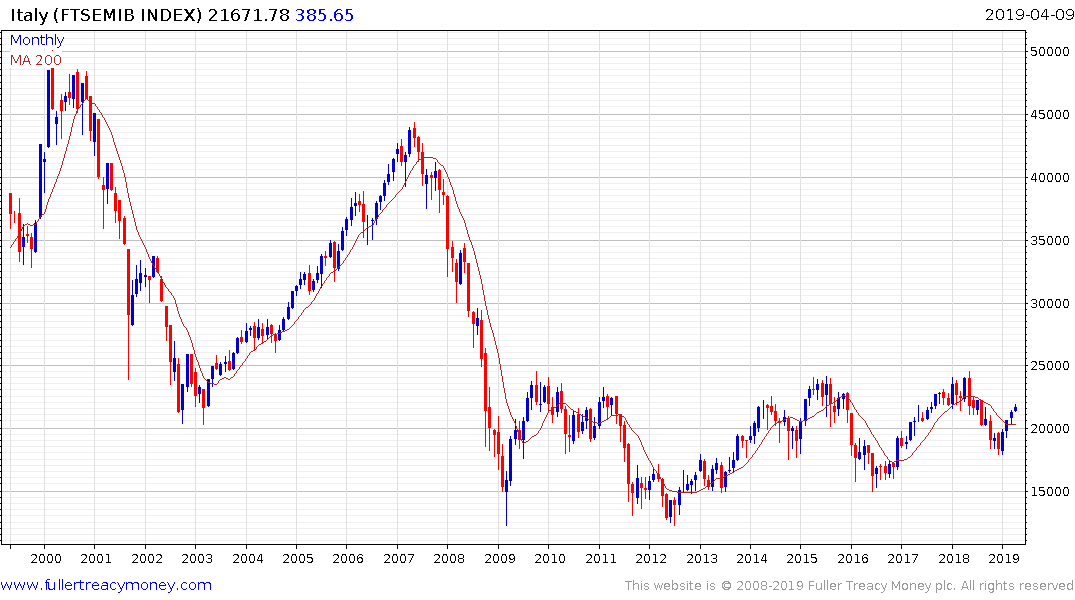 That appears to be what peripheral stock markets are pricing in as Greece (log scale chart above), Portugal, Spain and Italy rebound from the lower side of their respective decade long ranges. The true test of that hypothesis will be in how well they hold their lows during any process of consolidation that unfolds over coming weeks.