It will change everything: "DeepMind's AI makes gigantic leap in solving protein structures
Comment of the Day

It will change everything: "DeepMind's AI makes gigantic leap in solving protein structures by Eoin Treacy

“It’s a game changer,” says Andrei Lupas, an evolutionary biologist at the Max Planck Institute for Developmental Biology in Tübingen, Germany, who assessed the performance of different teams in CASP. AlphaFold has already helped him find the structure of a protein that has vexed his lab for a decade, and he expects it will alter how he works and the questions he tackles. “This will change medicine. It will change research. It will change bioengineering. It will change everything,” Lupas adds.

In some cases, AlphaFold’s structure predictions were indistinguishable from those determined using ‘gold standard’ experimental methods such as X-ray crystallography and, in recent years, cryo-electron microscopy (cryo-EM). AlphaFold might not obviate the need for these laborious and expensive methods — yet — say scientists, but the AI will make it possible to study living things in new ways.

The first iteration of AlphaFold applied the AI method known as deep learning to structural and genetic data to predict the distance between pairs of amino acids in a protein. In a second step that does not invoke AI, AlphaFold uses this information to come up with a ‘consensus’ model of what the protein should look like, says John Jumper at DeepMind, who is leading the project.

The team tried to build on that approach but eventually hit the wall. So, it changed tack, says Jumper, and developed an AI network that incorporated additional information about the physical and geometric constraints that determine how a protein folds. They also set it a more difficult, task: instead of predicting relationships between amino acids, the network predicts the final structure of a target protein sequence. “It’s a more complex system by quite a bit,” Jumper says.

The sheer breadth of what we do not yet know about biology is becoming more apparent all the time. That’s the greatest benefit of advances in technology, it makes answers possible where questions were never considered.

It was estimated that artificial intelligence would take decades to solve these kinds of problems. Instead Deep Mind has iterated on its model from two years ago by orders of magnitude. The acceleration in the ability to solve intransigent problems ensures commercial solutions beyond our current imagination will be delivered in decades to come.

The biotechnology and chemicals sectors will be among the greatest beneficiaries of this innovation but the realm of what is possible in every area of materials science has just gotten larger. The most important point is that while this is an exciting achievement it is a step on the route towards much greater understanding of chemical and biological processes. 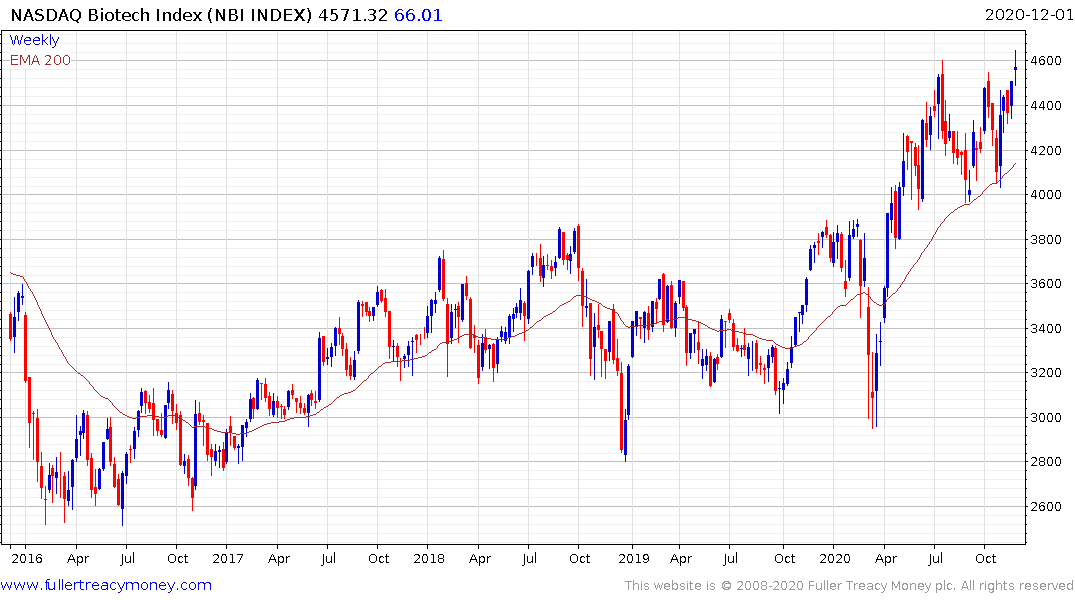 The Nasdaq Biotech Index continues to have first step above the base characteristics but is currently testing the upper boundary. 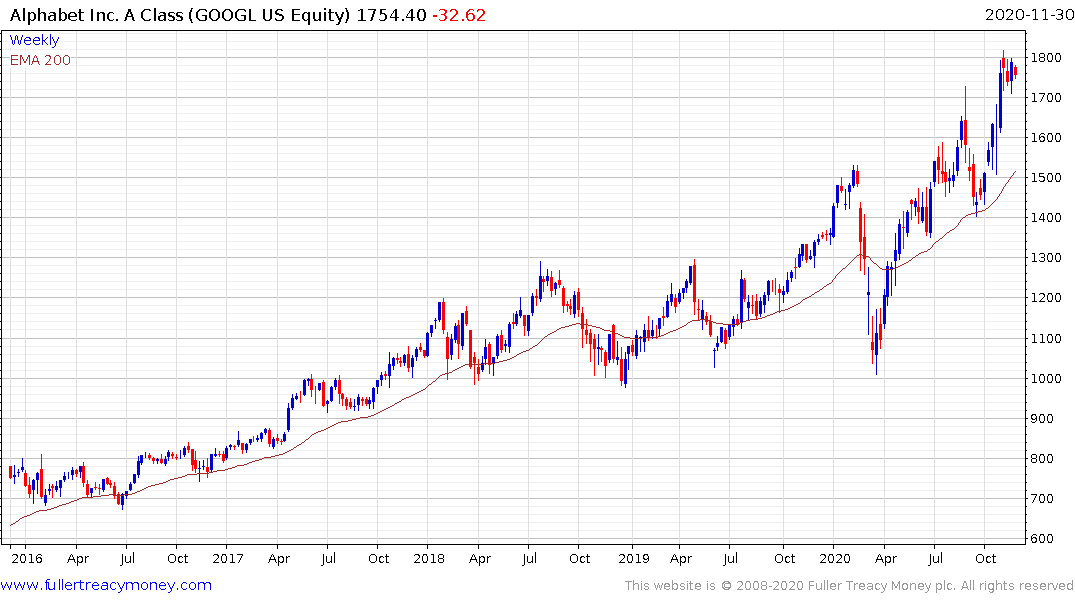 Google with Deep Mind-led artificial intelligence and cutting-edge quantum computing arms is well placed to benefit from these trends. Of the mega-cap companies, Google has invested most in open sky R&D. The valuation pays less attention to this fact than the outlook for primary advertising arm. As a result, the share offers a lot of optionality on future innovation.