Is there a bubble in financial markets?
Comment of the Day

Is there a bubble in financial markets? by Eoin Treacy

No doubt that in aggregate US equity valuations are at, or close to, all-time-highs.

There are a couple of things that are worth considering. The first is that identifying a bubble is not a timing indicator. The easy money policies adopted by central banks following the Global Financial Crisis 13 years ago were inevitably going to cause a bubble in something. The new information is that there is evidence of a bubble in a large number of asset classes because zero interest rates made a nonsense of any kind of valuation metric.

The one thing we know about manias from history is they are powerfully attractive. They suck in investors from all over the world and by the time they peak everyone is fully invested. Let’s take a poll. I know I still have a lot of cash. I’ve definitely being buying for my investment accounts over the last year. I’ve also been holding more leveraged positions than I have for a number of years.

Mrs. Treacy, on the other hand, is very risk averse. That’s most likely as a result of our experience living in Ireland (and spending Euro) while earning Pounds when it devalued in 2008. She is vehemently opposed to being 100% invested with our pension assets, which she sees primarily as a tax shelter. We have only begun to explore a plan to put more money to work but I expect it will be a lengthy conversion process.

So how are subscribers invested and how much cash do you currently hold relative to what is “normal” for you? By looking at our individual actions, in aggregate, we will probably come up with a better understanding of where the wider investment community is.

There is no doubt we currently have evidence of froth in the retail favourites. However, we also still have a very benign liquidity environment and the prospect of a significant rebound in consumer behaviour later in the year; once vaccinations are more prevalent.

Valuations are a useful indicator for the presence of a bubble. However, let’s not forget David’s adage “bubbles do not die of old age. They are assassinated by central banks”

Low bond yields, easy financial conditions and central bank determination to stoke inflation all support continued speculative action. We certainly have short-term overbought conditions but these factors suggest the market will be a buy on the dips until the tide of liquidity ebbs. That’s not in prospect until the myriad challenges of the pandemic are in behind us.

The other thing to remember is that bull markets don’t end because demand runs out. They end because supply increases. This note from David Einhorn’s Greenlight Capital highlights the fact that one of the reasons they recorded their best quarter ever in Q42020 is because two SPACs of companies they have positions in which went public.

Start-ups had no incentive to seek public listing in the decade up from the lows in 2008. Private investors were throwing money at them and demanded little in the way of profits or earnings. The promise of growth has been enough to generate huge valuations. That’s obviously not sustainable in the long-term but it is sustainable as long as liquidity is cheap and abundant. The fact that SPACs are listing is a sign that business owners are using inflated valuations to sell. That’s still a reasonably early trend and there are still lots of multi-billion-dollar companies ready to list. Eventually, the total of new companies will contribute to excess supply in the market but perhaps not right now. 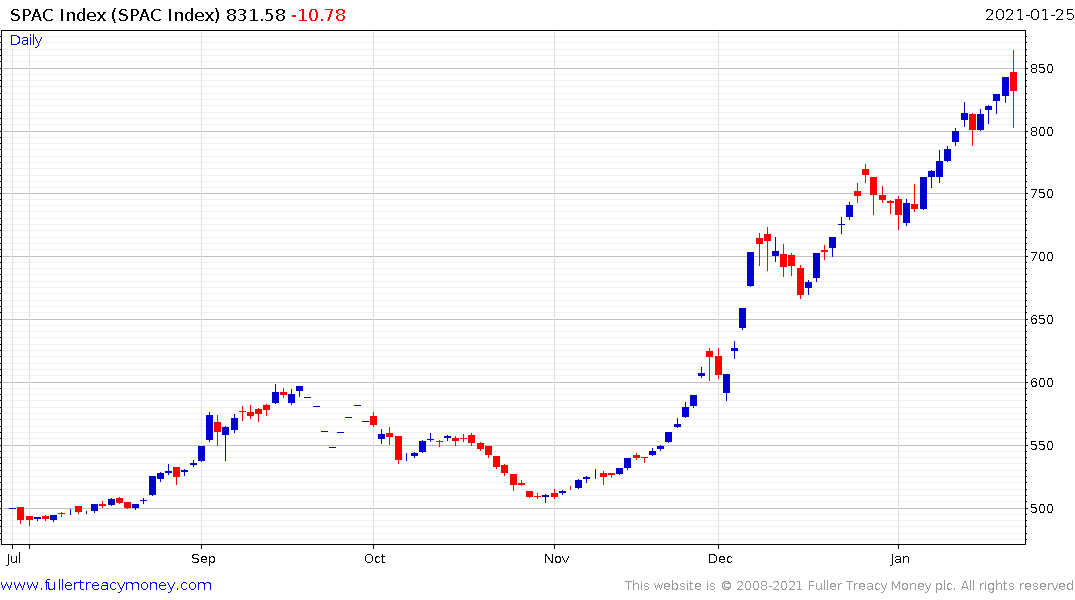 The SPAC Index has eased back over the last couple of day but still has a consistent sequence of higher reaction lows. 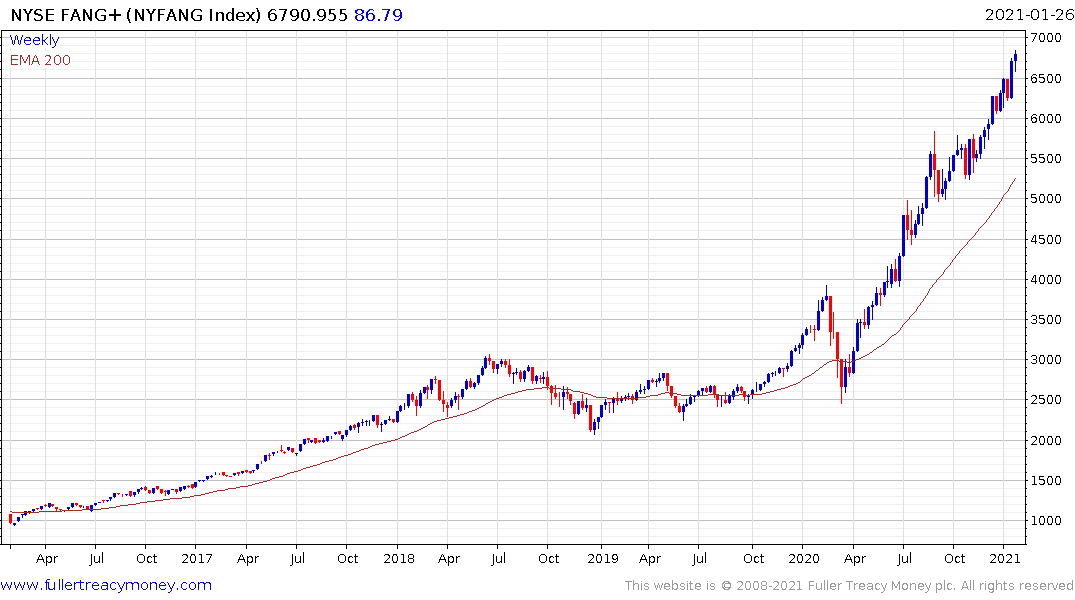 The NYSE FANG+ Index continues to extend its uptrend as the mega-caps, so far, hold breakouts to new highs.