Is the Metaverse Really Going to Happen? Nvidia Is Betting Yes
Comment of the Day

Is the Metaverse Really Going to Happen? Nvidia Is Betting Yes by Eoin Treacy

The company, now called Meta Platforms Inc., argues that millions of users are ready to adopt virtual reality technology — like its own headset — and live their lives in immersive online environments. That could mean attending a work meeting in a virtual boardroom, touring a digital factory or hanging out with far-flung friends in a simulated saloon. “The metaverse is the next frontier,” Chief Executive Officer Mark Zuckerberg declared.

For now, few people even have VR gear, and the metaverse concept would have to overcome concerns about privacy and — for some — a certain creepiness. But it has a big believer in one key corner: the largest maker of video-game chips, which says the metaverse is closer than we think and potentially the next gold mine for technology.

The video-game boom set Nvidia Corp. on a path to become the world’s most richly valued chip company — overtaking the likes of Intel Corp. — and now it’s ready to remake the internet as a three-dimensional place. Rather than using the web to look at electronic pages, there will be a set of connected virtual worlds, according to Richard Kerris, an executive at the chipmaker whose career has included stints at Apple Inc. and Lucasfilm.

“You might not think you’ll be in the metaverse, but I promise in the next five years all of us will be in one way or another,” he said.

The metaverse has captured the imagination of the mob over the last week. The fact it twins with the evolving trend of recreating the supply inelasticity of land in the virtual world through the issuance of non-fungible tokens and crypto tokens has helped fuel enthusiasm. 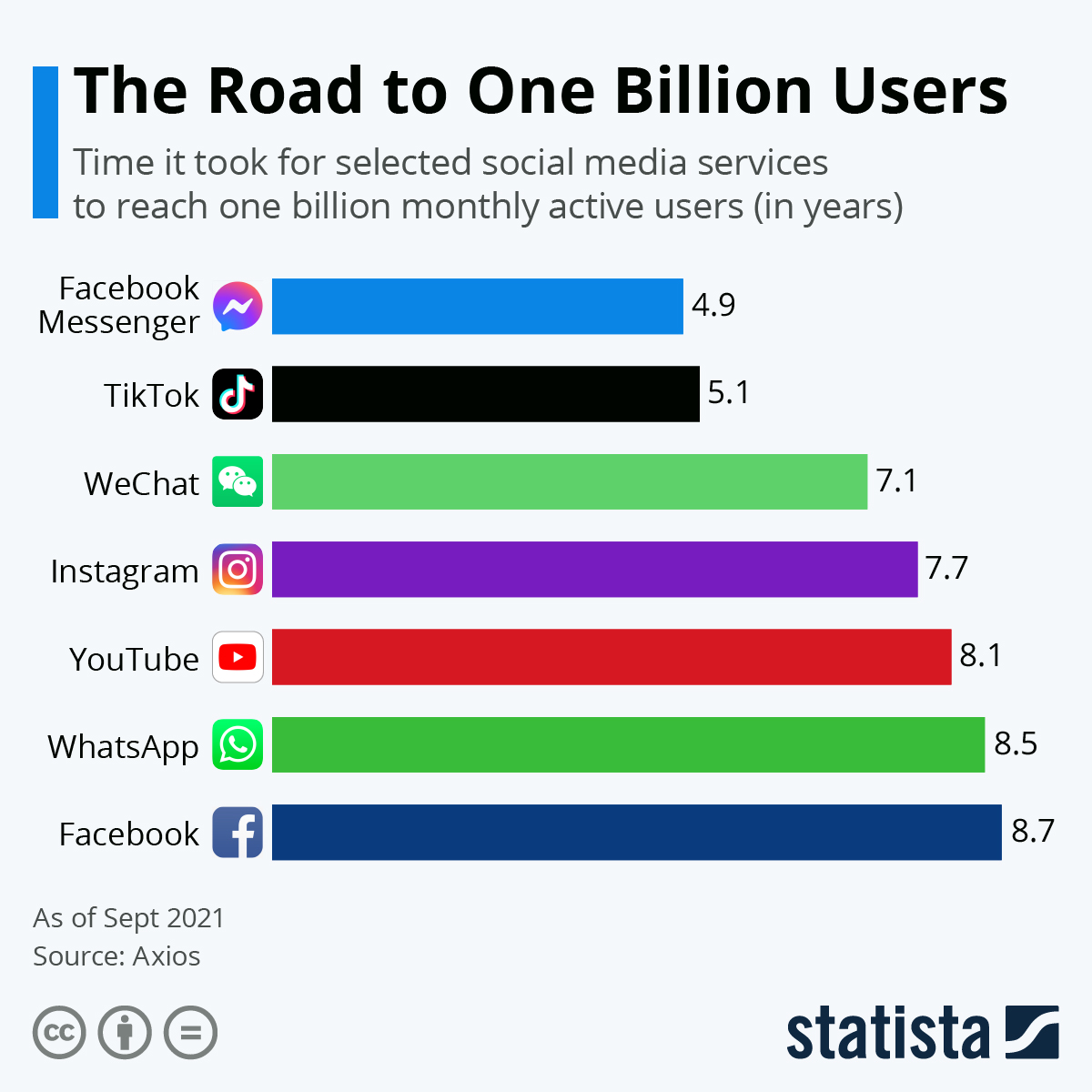 The reason Facebook is pioneering the metaverse theme is because the speed with which new social media apps gain a billion users continues to shrink. For Facebook it was 8.7 years, for TikTok it was 5 years. Fortnite went from zero to 350 million in three years and today, Roblox has more than 200 million users after 5 years.

The social media sector is morphing and becoming more gamified. That is not where Facebook specialises. They have less confidence in capturing the screentime of the next youngest demographic so they are betting instead on the next potential venue for people to spend their time.

The challenge is VR headsets are very eye-heavy. I bought my daughter a Quest headset at the dawn of the pandemic. We used it heavily for a month and I don’t think anyone has used it in a year. It’s heavy and any activity results in a very sweaty experience. My 40-year+ eyes don’t tackle the strain very well either, even if the games are fun.

Maybe the newer headsets overcome some of these challenges or maybe Elon Musk’s Neuralink will deliver a viable product at some point in the next couple of decades. Instead, the logical inconsistency in some of the most ambitious arguments suggests bubbly characteristics that are still inflating. 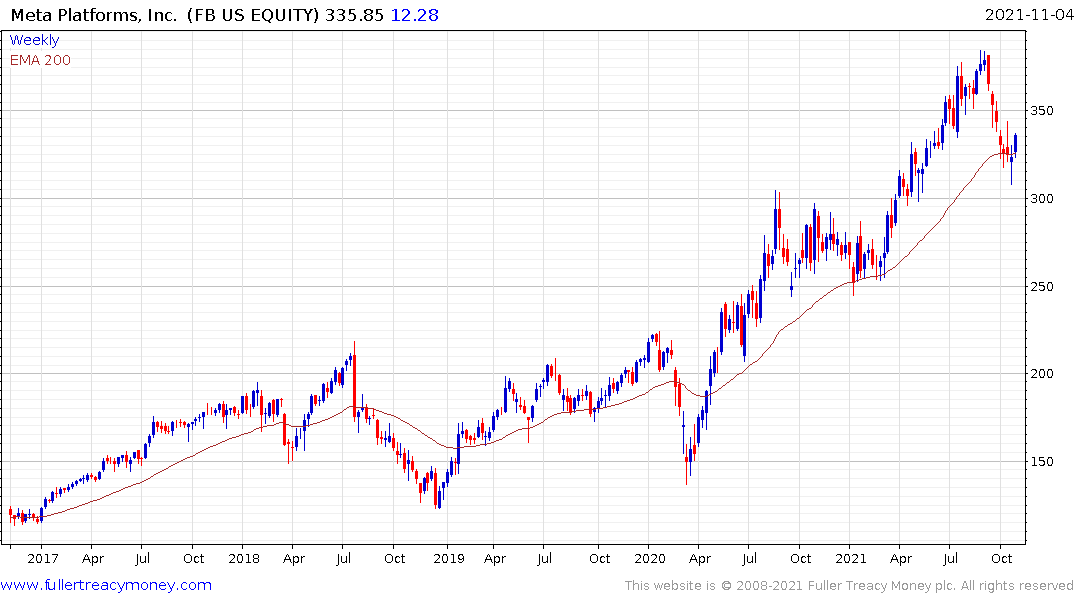 Meta Platforms continues to firm from the region of the trend mean and remains in a consistent medium-term uptrend. 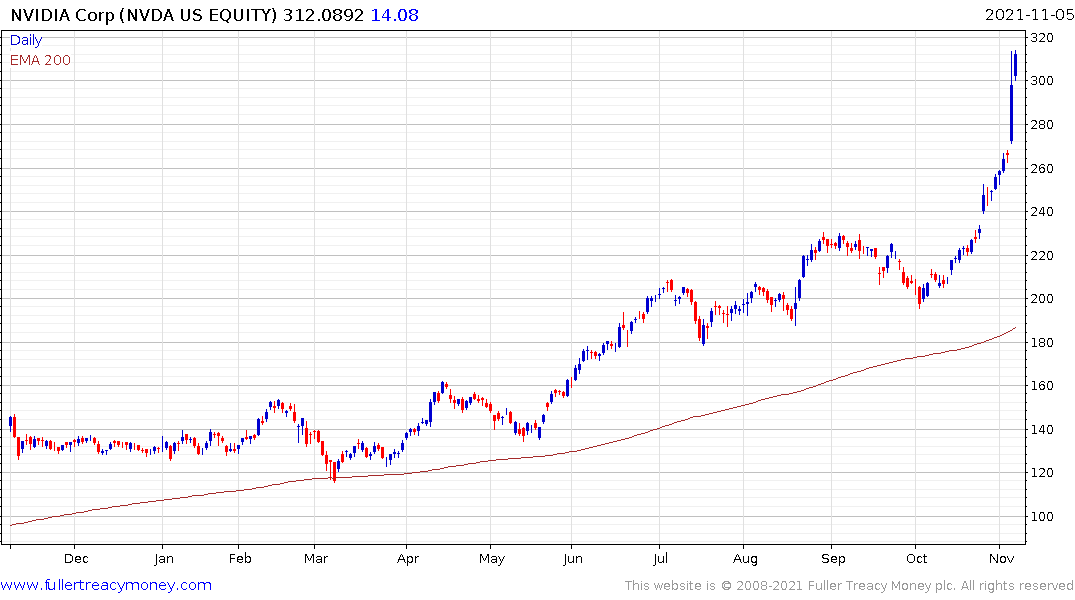 NVidia is clearly accelerating but that’s been true for a couple of years.

Excitement and a desire to lock down a position in early-stage ventures is driving significant interest in the NFT and metaverse tokens. Most people did not invest in bitcoin a decade ago and are intent on not making the same mistake twice. It’s recreating a goldrush mentality online with legions of people wishing to stake a claim. Arguably NVidia and Meta Platforms are wholesaling shovels in this bull market. 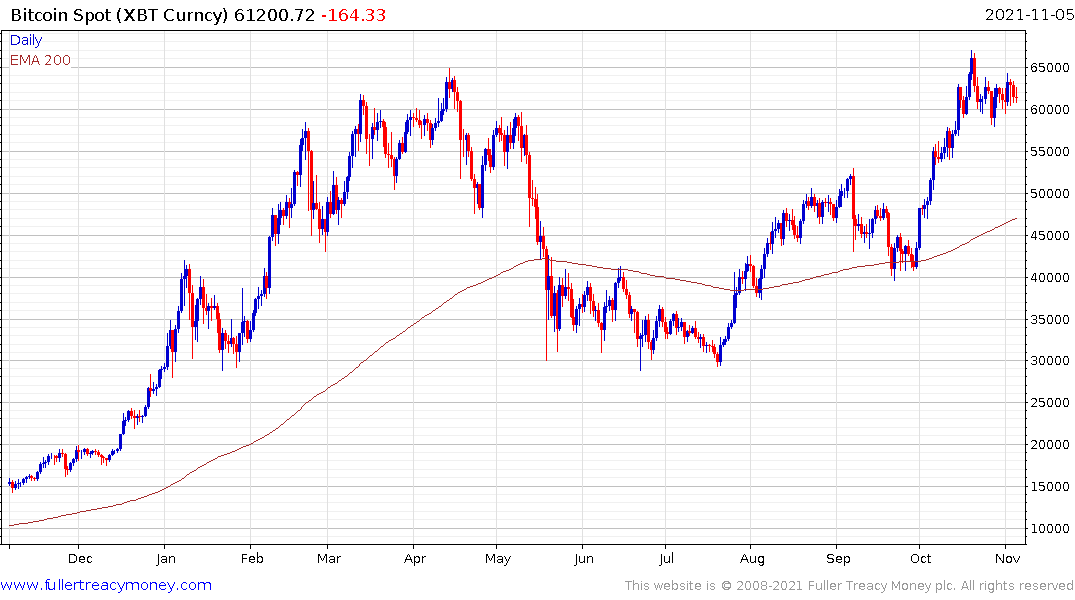 Bitcoin continues to pause above $60000 and will need to continue to hold the lows near $57,000 if the benefit of the doubt is to continue to be given to the upside.