Is an 'Apple Prime' the Answer to iPhone Troubles?
Comment of the Day

Is an 'Apple Prime' the Answer to iPhone Troubles? by Eoin Treacy

Since then, the hypothetical of a monthly subscription to All Things Apple has assumed an extremely unofficial name—Apple Prime—based on Amazon’s bundle of free shipping, movies, music, photos and various other services. Last week, the notion took on sudden urgency, as Cook sliced Apple’s sales outlook, sending the company’s stock plunging 8 percent for the week and nearly taking the rest of the stock market down with it.

Proponents of Apple Prime are now reading tea leaves and seeing puzzle pieces moving into place. In his note to shareholders last week, Apple’s chief executive officer wrote under the heading of “other initiatives to improve our results” that Apple was working on “making it simple to trade in a phone in our stores, finance the purchase over time, and get help transferring data from the current to the new phone.”

The idea is that instead of paying a cool grand for a new iPhone every year, devotees might pay Apple a monthly stipend for automatic access to the latest device. Apple already has an iPhone upgrade program that costs $37 a month, administered by Rhode Island-based Citizens One. Presumably Apple could then bundle this with access to music, storage, the AppleCare warranty program, and the much ballyhooed but still largely invisible stable of Apple-financed TV shows and films, like an upcoming animated movie. “This is Apple Prime. And it is coming,” tweeted investor and Apple watcher MG Siegler, after reading Cook’s letter.

The subscription business model is the tech industry’s answer to the cyclicality which has plagued it since its dawn. By creating products that are essential to modern living they have turned a boom to bust pattern into an easily modellable stream of cashflows that any fundamental value-oriented investor can justify having a position in.

In addition to buybacks which have restricted supply the subscription business model has a been one of the primary factors behind the consistency in the trends of companies like Microsoft, Cisco Systems, Autodesk and Adobe. 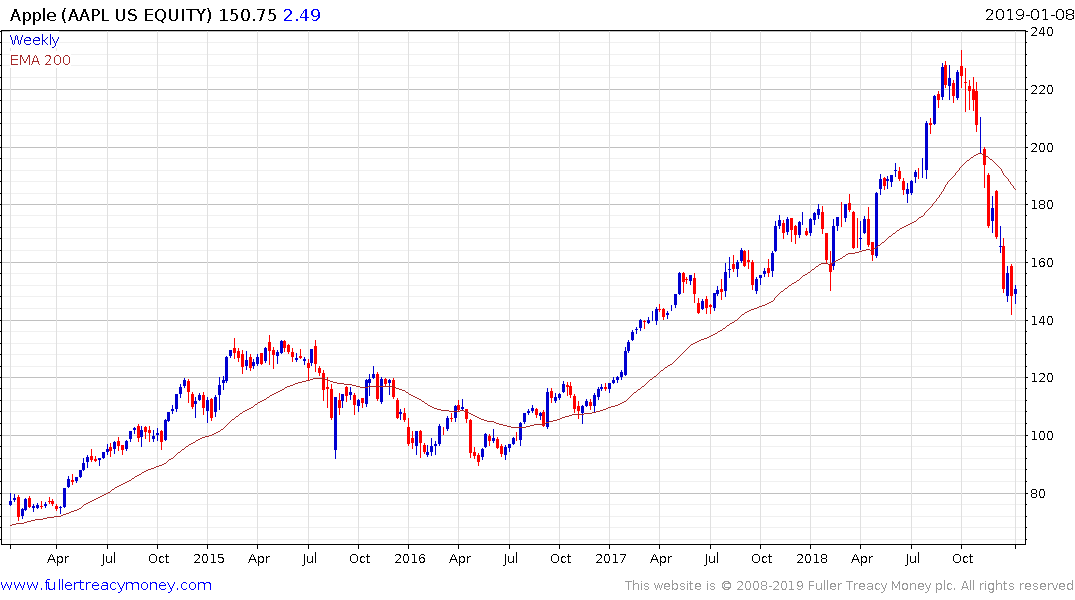 Apple has created recurring revenue streams from the predictability of its phone releases and the strength of purchase growth in the Appstore. However, for a hardware company to morph from a focus on big ticket items to a subscription model represents a big leap of faith in the sustainability of its ecosystem. The companies that subscriptions work best for are software focused, where margins tend to be wider. Apple certainly has wide margins but hardware as a service is an untested business model, though perhaps not without promise.

The share is short-term oversold and considering the challenges it faced from peaking handset demand and China’s slowdown, it needs to come up with something new to revitalise investor interest. Potential for a reversionary has increased but a period of support building is likely required before significantly higher levels can be sustained.