Unprecedented stimulus. Adapting to the virus is an important driver of the recovery and equally important is the policy support necessary to bolster consumer and corporate balance sheets in the early stages of the recovery. We think that trillions of dollars in fiscal support and balance sheet expansion from the Fed provide an effective bridge in that regard and we expect more to come. Our view is that Congress will ultimately pass a CARES 2 package in of around $1.5T, which will put the US on track to run close to a 24% fiscal deficit this year, the highest since WWII. The Fed has already expanded its balance sheet by roughly 13.7% of GDP (based on 2020 GDP) and M2 growth has accelerated to 22%Y, a post-1943high. We believe that the Fed’s balance sheet will expand (from February 2020 levels) by US$6.2trillion (or 29.5% of GDP) to a size of ~US$10.3trillion (or 45.5% of GDP) at end-2021, more than the balance sheet expansion during QE1,2and 3combined at 20% of GDP. Other central banks are following suit.

We see overwhelming evidence that the v-shaped recovery narrative is the right one. To date, economic data have been strongly surprising on the upside. Economic surprise indices are just off records that far surpassed any prior peak both globally (Exhibit 5) and in the US (Exhibit 6).For example, US retail sales have surpassed their pre-Covid highs (Exhibit 7) while manufacturing PMIs are now well into expansionary territory with the latest rating of 56 (Exhibit 8). Data have been tracking strongly enough that our economists recently brought forward their forecasts of a return to prior peak GDP forward from 4Q21 to 2Q21 (assuming the passage of CARES 2in the range discussed above) (Exhibit 9).

We're bulls on the economy but think equities at the index level have largely priced in a good portion of the rebound. Further upside from here is about earnings moving higher and we expect valuations to be a headwind. We continue to prefer cyclicals over defensives, small over large, and companies that can exhibit strong operating leverage to an ongoing recovery. In short, we want to own stocks whose NTM EPS can rise more than our expected valuation decline.

Media commentary continues to focus on the number of new cases of COVID-19 but that is an irrelevant figure. The numbers of hospitalisations and deaths and the fear that healthcare systems would be overrun was the reason for locking down economies. The reality today is even in countries where the number of cases is increasing, the hospitalization rate has not increased because most newly infected people are younger. Obviously, there are risks that younger people will infect older people but that is a manageable risk compared to the financial stress of total cessation of economic activity.

The challenge for investors is in whether to bet on the continued outperformance of growth stocks or to pay closer attention to catch-up potential for real world companies. If breadth continues to widen, that decision will be less of an issue. That’s likely to be heavily influenced by the willingness of central banks to continue to lend assistance. That increasing of the size of balance sheets has moderated of late so there are legitimate questions about the timing of further assistance. 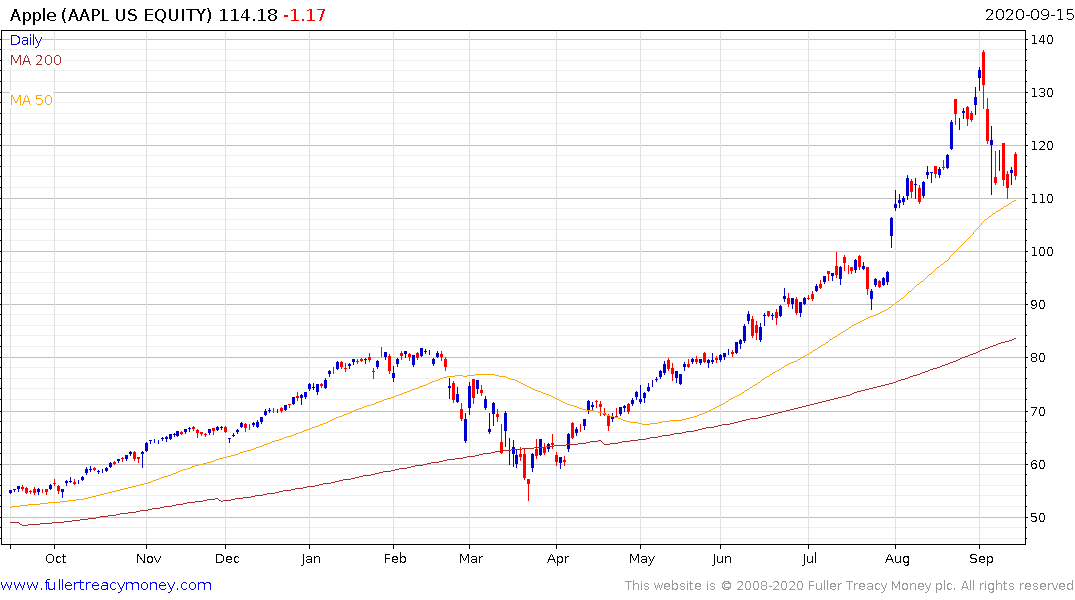 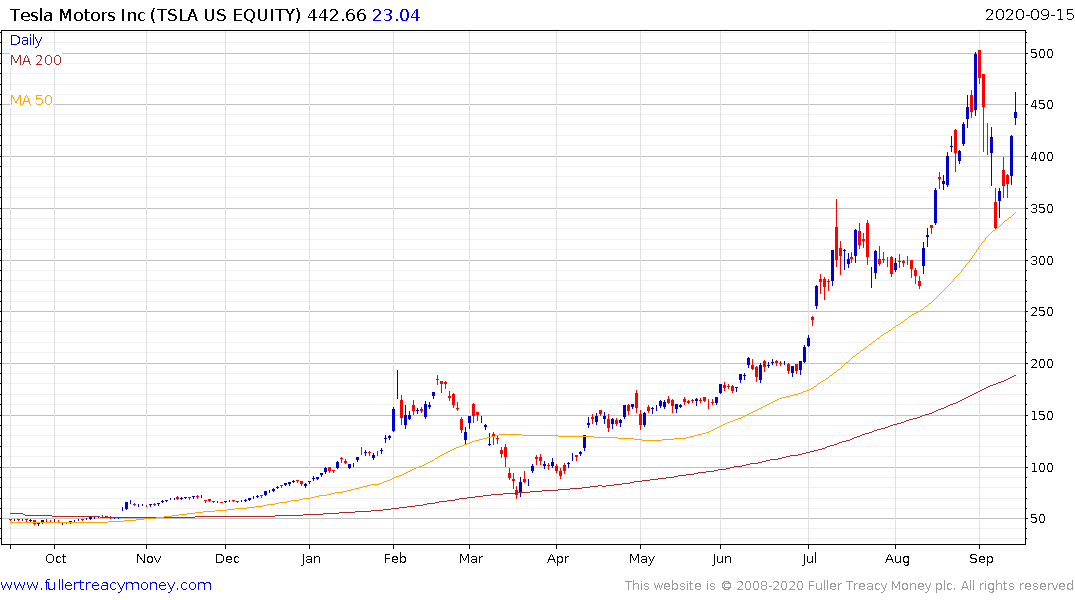 Meanwhile the 50-day MA continues to represent the point at which buy-the-dip traders are willing to step in with fresh purchases. That is as true of the wider indices as it is of banner stocks like Tesla. Apples ability to hold the region of the 50-day MA will be tested following its failure to announce a new 5G-ready phone at today’s product event. 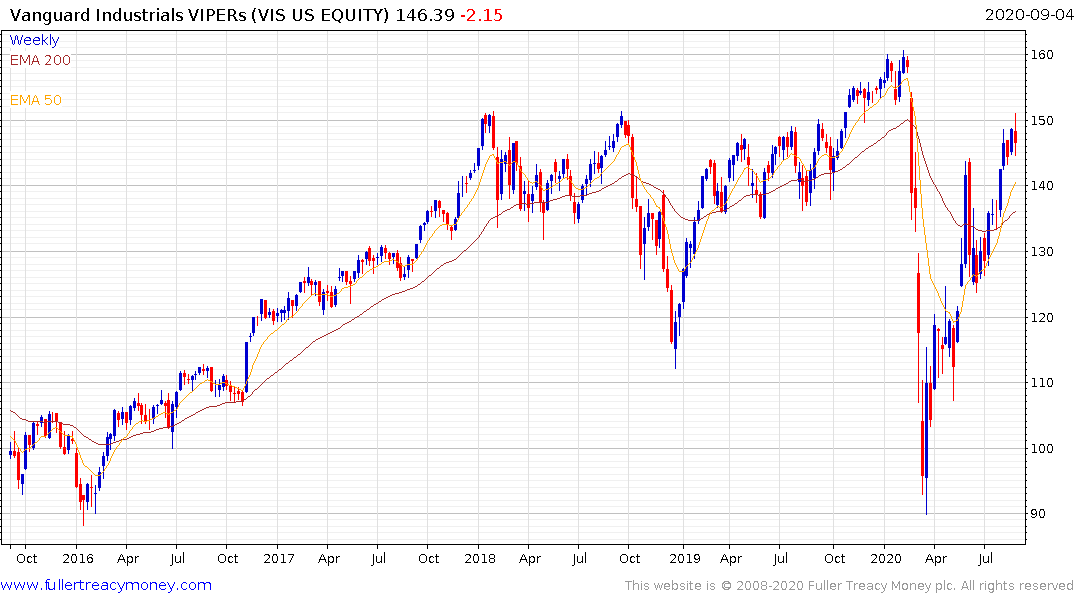 The Vanguard Industrials ETF has rebounded to test the region of the upper side of the more than two-year range. Some consolidation is possible in this area but the sector does stand to benefit from wider reopening if that can be achieved.

The Federal Reserve fudged the introduction of monetary financing during the lockdowns. However, the US government deficit still needs to be funded and that means upward pressure will still be exerted on the balance sheet. When the Fed’s balance sheet next breaks on the upside, it will be clear confirmation that Modern Monetary Theory has prevailed. 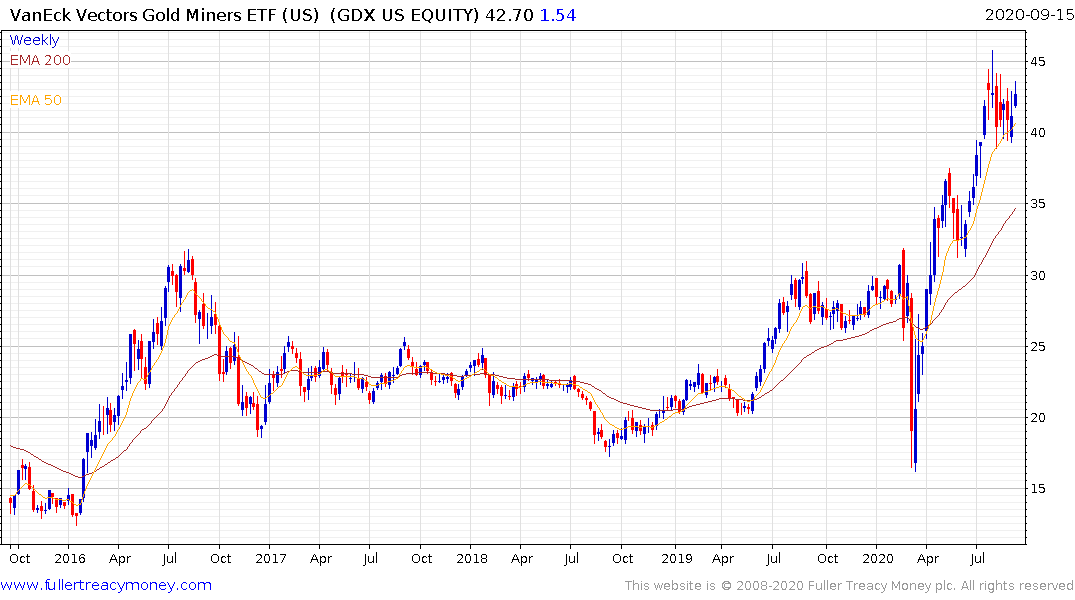 VanEck Vectors Gold Miners ETF (GDX) rallied today to break the month-long sequence of lower rally highs. While the ranging phase is still underway this consolidation has been very steady and supports the view gold shares remain on a clear recovery trajectory.