Reserve Bank of India Governor Raghuram Rajan cut the key rate by 25 basis points and said he will wait to assess monsoon rains before easing further, disappointing investors looking for more reductions to spur weak economic growth. The rainfall will be less than predicted in April, the government said less than two hours after the RBI’s decision. Below-normal showers may fan prices of everything from rice to vegetables in Asia’s third-largest economy, where food costs account for almost 50 percent of the consumer price index.

“This is a time when the economy needs a boost and these little drops of 25 basis points won’t help,” Ajay Srivastava, managing director of Dimensions Consulting Pvt., said in an interview with Bloomberg TV India. “A perfect environment will never exist.”

While retail inflation eased to a four-month low of 4.87 percent in April, staying below the RBI’s stated limit of 6 percent by January 2016, the prospect of inadequate rain and rising crude prices are risks, Rajan said. Consumer prices may drop until August and then start rising to about 6 percent by January, he said.

Despite the fact that India is growing rapidly, agriculture remains the dominant employer and the challenge of feeding more than a billion people is a constant concern. A weak monsoon is inflationary. The effect of rising oil prices, which have been climbing in Rupee terms, is an additional consideration for Rajan who earned his spurs as an inflation hawk. 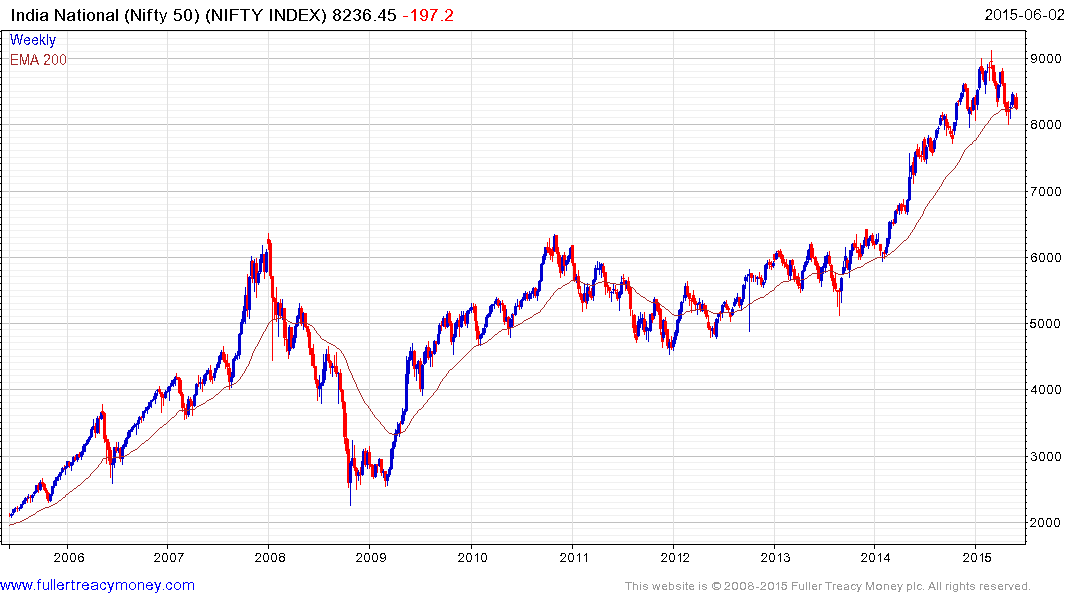 In nominal terms, the Nifty Index completed a six-year range in early 2014 and rallied 50% before pausing in the region of 900. A medium-term process of consolidation is underway which has so far been reasonably shallow. The Index has held a progression of lower rally highs since March and will need to hold the 8000 level during the current period of weakness if a deeper and potentially lengthy test of underlying trading is to be avoided.