India's insurance business was full of promise when it was thrown open to competition in 2000, but has been hobbled by losses, regulatory change, uncertainty and a sharp slowdown in the economy.

The federal government's approval for a proposal to raise the limit to 49 percent has been kept pending for a long time due to opposition by nationalist politicians, frustrating many overseas investors lured by low penetration rates in India.

Life insurance penetration in India is about 3.2 percent of gross domestic product in terms of total premiums underwritten in a year, much lower than more than 10 percent in Japan and nearly 6 percent in Australia.

Dutch banking and insurance group ING Groep NV and New York Life have quit their Indian ventures in recent years, while some other foreign investors were said to be weighing their options.

At the end of Sept 2013, India had 24 life insurers, which accounts for 80 percent of the sector's business. Only 17 of the 24 reported profits in the fiscal year ended March 2013, according to latest data available with the regulator.

"This measure should provide impetus for spurring growth of the insurance industry and enable foreign players to bring in capital required for growing distribution (and) product suite," said Shashwat Sharma, partner at consultant KPMG.

India represents a potent market for western multinationals but has been a disappointing investment for a number of companies who failed to deal effectively with the bureaucratic quagmire, regulatory roadblocks to growth and depreciation of the Rupee. With a new administration and a greater potential share of the profits, internationally oriented companies may be re-enticed to consider India. 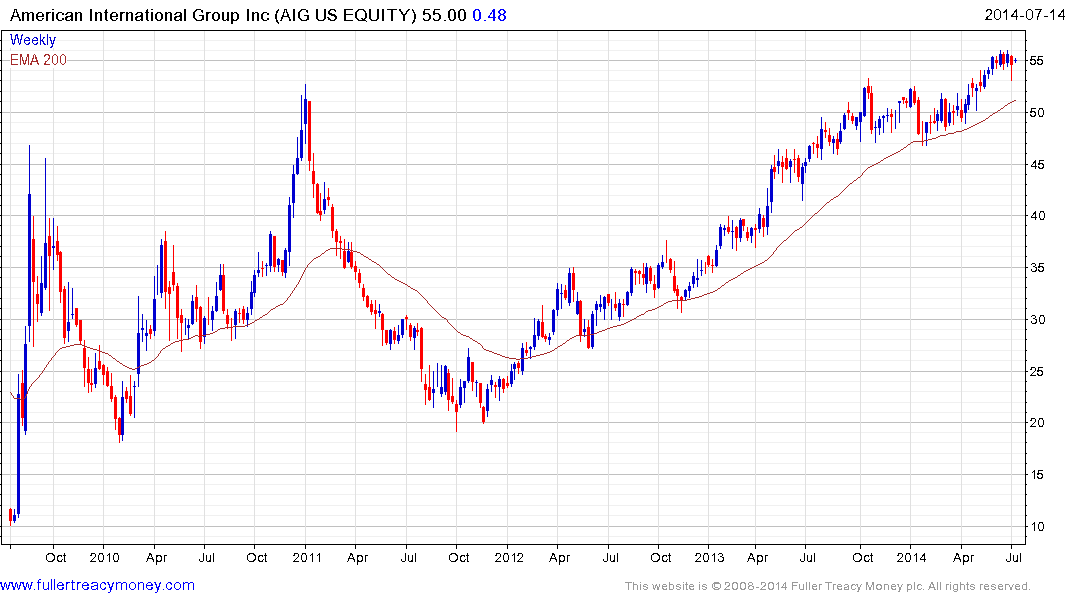 Tata AIG Insurance Solutions does not appear to have been part of AIG’s AIA Group spin-off in the aftermath of the financial crisis and probably contributed to the 12% of the revenue the company generated in Asia in 2013. AIG has been trending consistently higher since 2011 and is now trading at its highest level since October 2008. A sustained move below the 200-day MA, currently in the region of $52, would be required to question medium-term scope for additional upside. 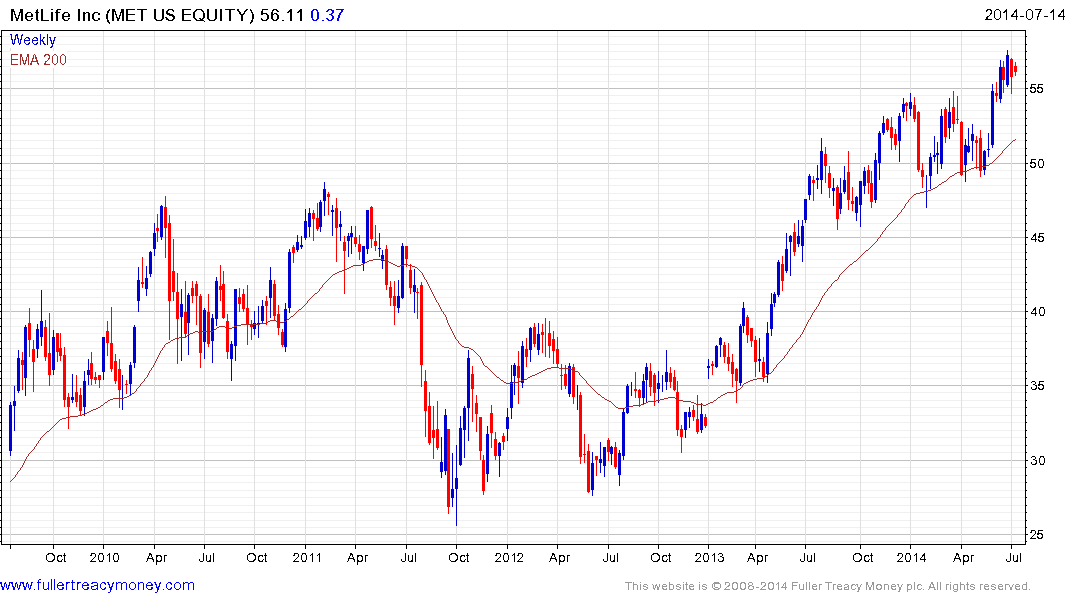 Asia represented 18.3% of revenues for US listed MetLife in 2013. The share had been ranging in the region of the upper side of the five-year base for much of the last six months, but broke out to new recovery highs in June. A sustained move below the $50 area would be required to question current scope for continued higher to lateral ranging. 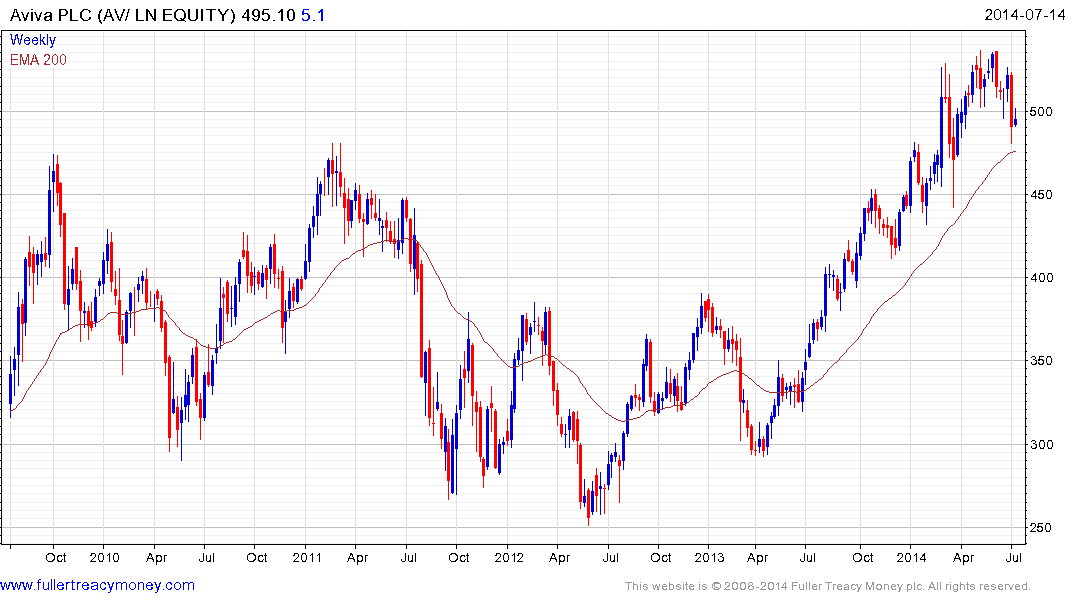 UK listed Aviva might be one of India’s larger insurers but Asia represented only 1.8% of revenue last year. The share found support in the region of the 200-day MA two weeks ago. It will need to continue to at least hold the 175p area, if the medium-term progression of higher reaction lows is to remain intact. 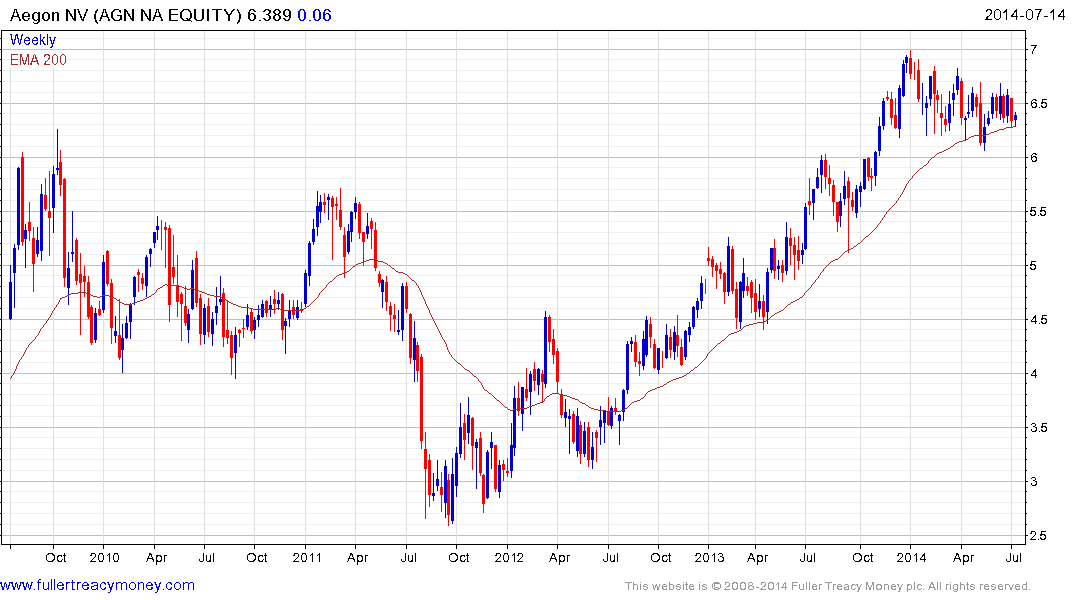 Dutch listed Aegon does not report Asian revenue separately. The share has been forming a first step above the five-year base since January and firmed last week from the region of the 200-day MA. A sustained move below €6 would be required to question recovery potential. 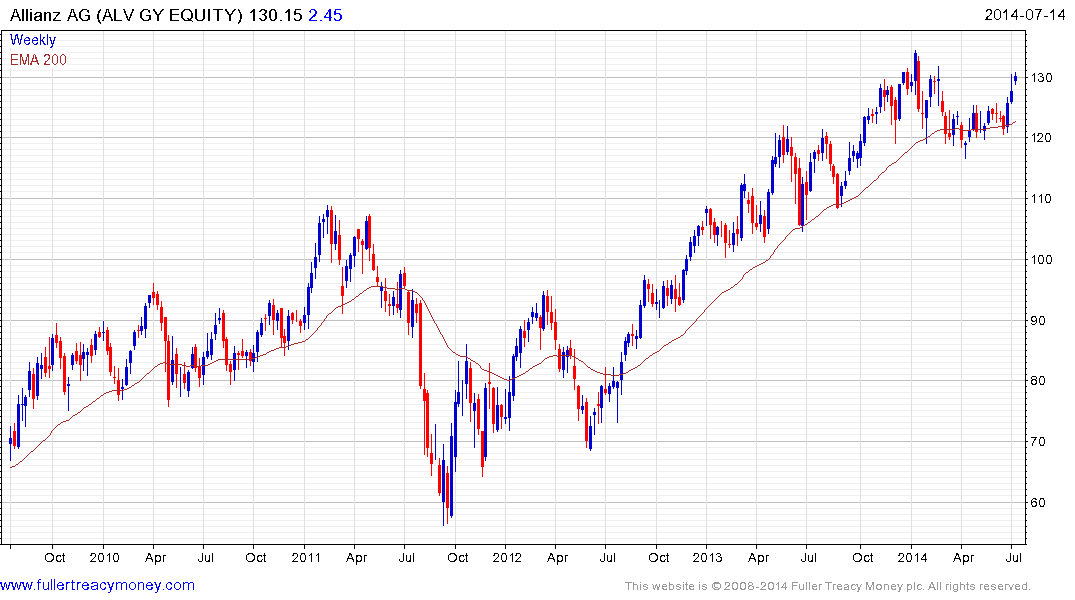 German listed Allianz generated 1.8% of revenue from Asia last year. The share continues to firm from the region of the 200-day MA and a sustained move below $120 would be required to question recovery potential.

The above shares demonstrate that for international insurance companies, the Indian market represents a negligible portion of revenues but nonetheless a potentially high growth element. If subscribers can suggest a GDR or ADR for a domestic Indian insurance company that potentially offers a pure-play on the sector I would be happy to add it to the Chart Library. The commonality of these shares suggests the international insurance sector remains on a recovery trajectory.