India 2020: The Road to East Asia
Comment of the Day

India 2020: The Road to East Asia by Eoin Treacy

So, what does the government need to do in order to get firms to invest again? The first and most obvious thing would be to finish the various stalled infrastructure projects. The capital invested in these projects can be made generate output. This will also help the banking system which has seen an increase in its non-performing loans as a consequence of the various delays. However, the longer term agenda would be to make it easier to do business in  India. The World Bank’s “Doing Business Report 2014” ranked India 134 out of 189 countries in terms of the ease of doing business. As one can see from the table below, it performs especially poorly in categories that involve interface with the government – paying taxes, construction permits and so on. The national government cannot resolve all the issues, but Prime Minister Modi’s election slogan of “Minimum Government, Maximum Governance” suggests that he is acutely aware of this issue and, given his administrative record, it is reasonable to expect significant improvement in this space.

While a generic improvement in the business climate would be welcome, Prime Minister Modi’s speeches and actions suggest a more specific economic model. As explicitly stated in the Independence Day speech, one component of his economic model is an emphasis on export oriented manufacturing. Notice that this is not about agnostic free markets but about creating competitiveness by investing in industry clusters. Another component is investment in heavy infrastructure ranging from power to railways. A third element is labour reforms. This is an area that previous government considered too politically sensitive but has already been opened up for reform by the NDA government both at the state and central level. These reforms are clearly a prelude to the mass deployment of labour. Finally, a repeated emphasis on building and expanding cities – urbanization being the spatial manifestation of industrialization. Not only are these elements internally consistent, they also look very much like the economic model used by East Asian countries to rapidly modernize themselves. In other words, for the first time since Nehru, we have a wide-ranging, internally consistent economic model. Moreover, this model follows a well-trodden path

Of course, we are not implying that agriculture and services will be simply ignored. Far from it, the new “investment” based approach will be applied to these sectors as well. Indeed, Narendra Modi’s political rise is partly due to his success in generating agricultural growth during his stint as Chief Minister of Gujarat. This is particularly remarkable given that Gujarat is a semi-desert state that is not naturally well-endowed with either good soil or plentiful water supply. Heavy investment in water management and new technology were responsible for the state’s success. At the national level, however, farm mechanization is only 25% while the productivity levels for rice and wheat have not increased significantly since the 1980s.An important change in the strategy of this government will be its openness to mechanization and new technology even in agriculture. This is consistent with the idea that the farm sector will have to produce more even as industry sucks out workers from it. The latest Economic Survey summarizes this approach as follows “Due to the significant and continuous reduction of agricultural workforce, higher levels of farm mechanization are necessary for sustaining productivity and profitability.” Of course, this will require a wider reform and liberalization of the sector.

India represents a massive potential growth market for the resources sector which couldn’t come at a better time as China’s demand growth trajectory moderates. Following the path to development adopted by so many of its neighbours represents a ground breaking change of pace for India which could be transformational for the stock market if successfully implemented.

This additional report accompanying India 2020 highlights the primary stock market beneficiaries of this development. Fortunately a number of them maintain overseas listings.

In the infrastructure sector Larsen & Toubro’s London listed GDR found support in August in the region of the 200-day MA and a sustained move below $23 would be required to question medium-term recovery potential. 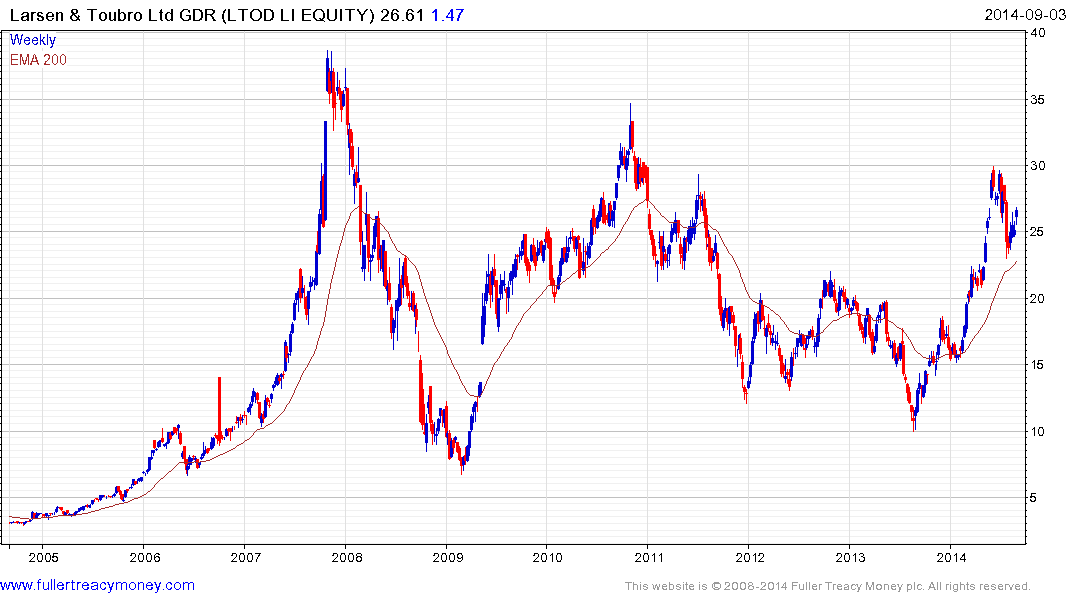 The banking sector has a number of foreign listed ADRs and GDRs. London listed Axis Bank rebounded powerfully from last year’s slump to retest the 2010 highs and a break in the short-term progression of higher reaction lows would be required to check momentum. 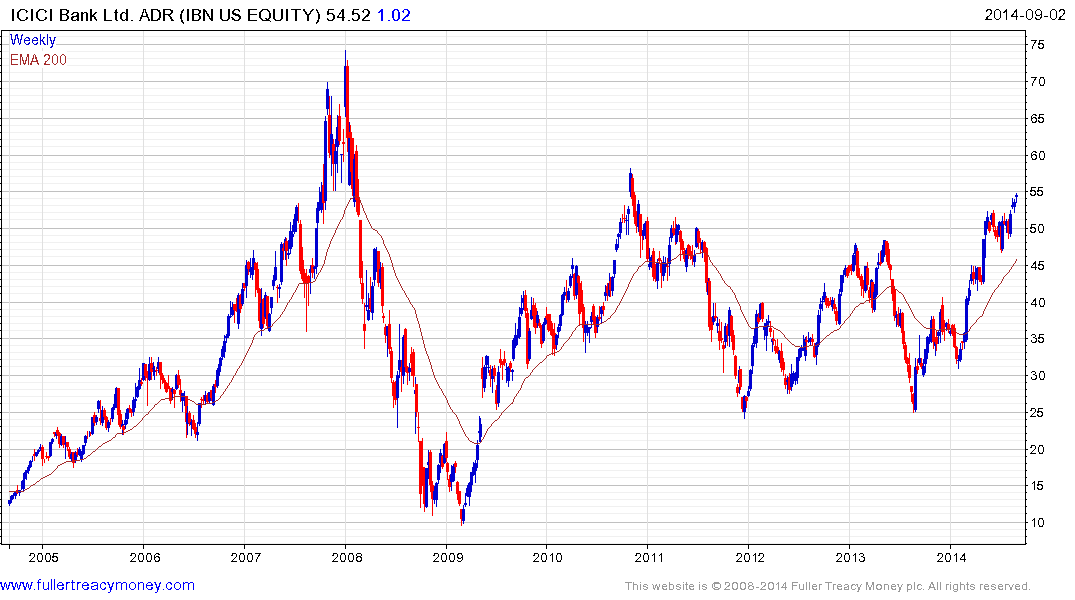 ICICI Bank’s US listed ADR has a similar pattern. 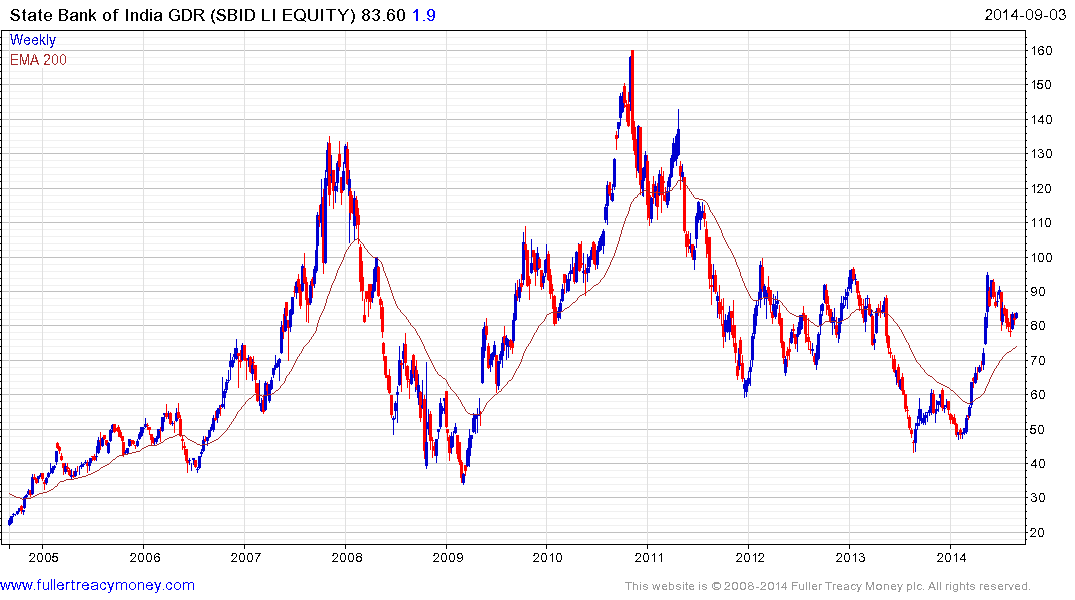 State Bank of India’s UK listed GDR has unwound its overextension relative to the 200-day MA over the last two months and a sustained move below $75 would be required to question medium-term recovery potential. 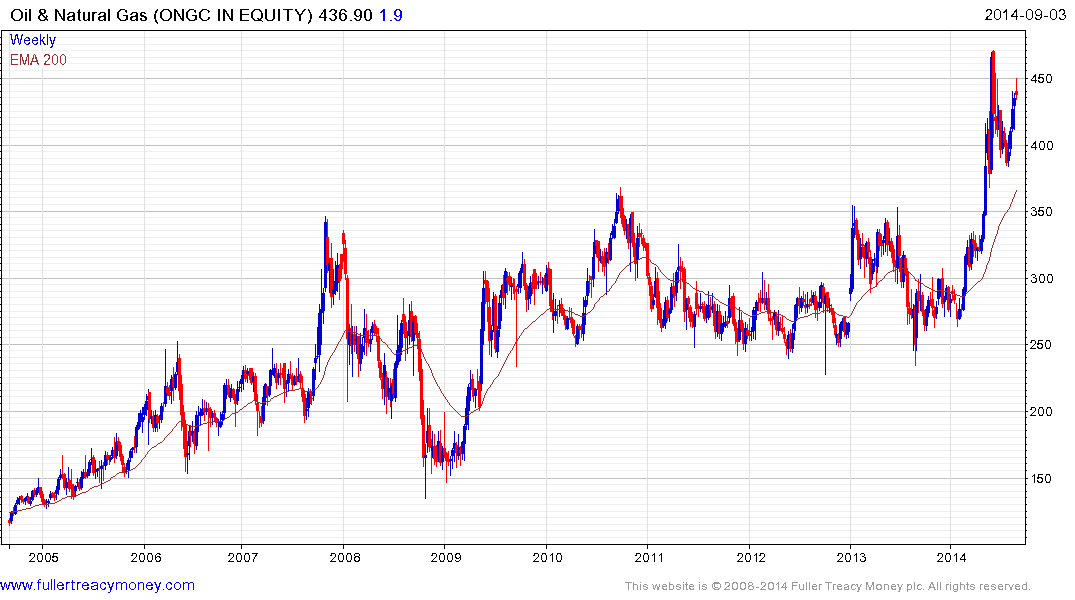 Among India listed shares ONGC should benefit from liberalisation of the oil and gas market and removal of subsidies. The share completed a six-year base in May, returned to test the upper boundary in August and a sustained move below INR375 would be required to question medium-term upside potential. 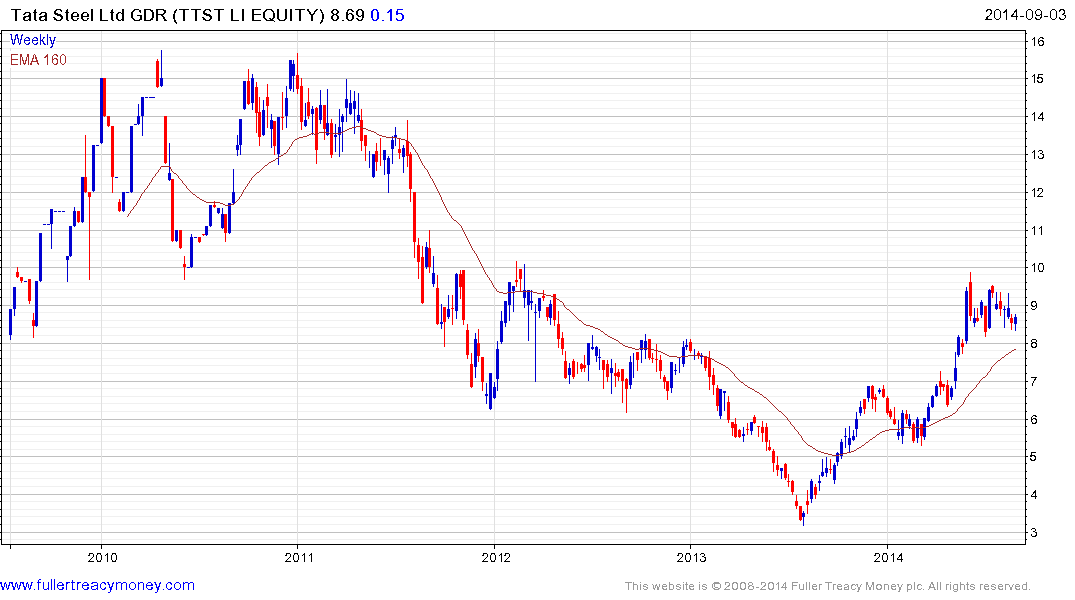 Tata Steel’s London listed GDR has broken a three-year downtrend and recovery potential can continue to be given the benefit of the doubt provided it continues to find support in the region of the trend mean following reversions. 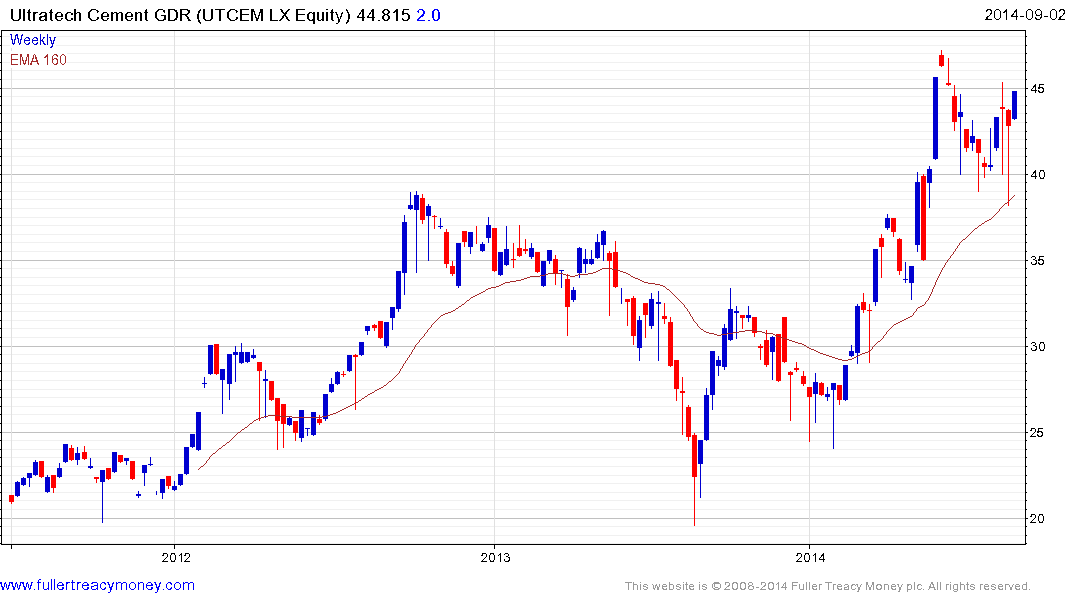 Ultratech Cement’s Luxembourg listed GDR found support last week in the region of the 200-day MA and a sustained move below $40 would be required to question medium-term potential for additional upside. 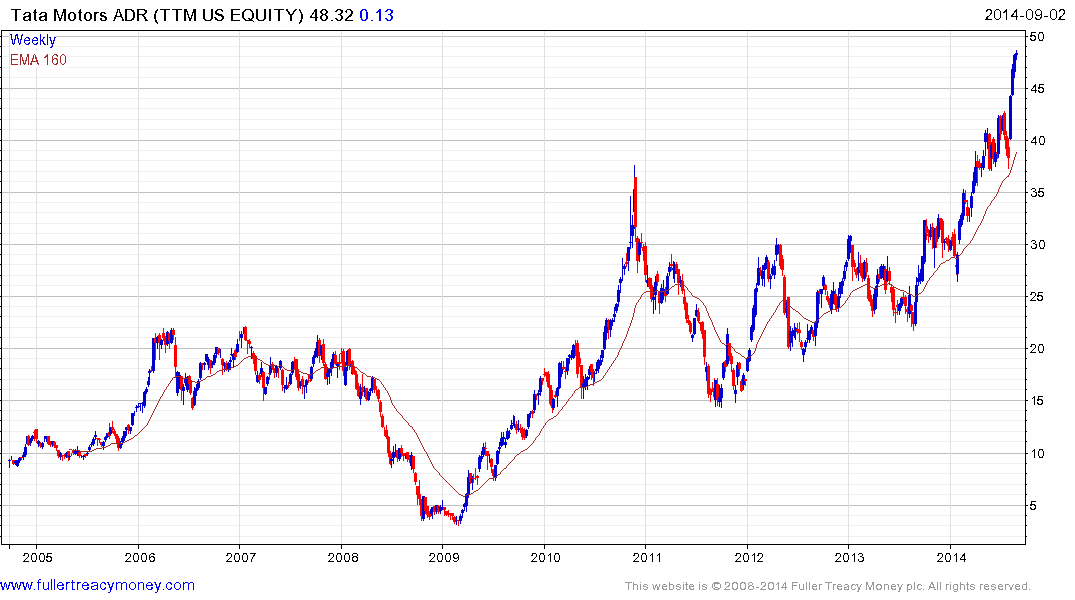 Tata Motors’ US listed ADR found support in August in the region of the 200-day MA before surging ahead. It is currently somewhat overextended relative to the MA and susceptible to some consolidation of recent powerful gains.

Here is a link to the Indian ADRs and GDRs section of the Chart Library.