In China, Distressed Debt Can Be AAA
Comment of the Day

In China, Distressed Debt Can Be AAA by Eoin Treacy

Enter the Foreign Raters! authorities have a record of pulling out the stops to aid some corporate debtors, including pressuring creditors into providing funding even after a company has defaulted. So it’s hard to imagine they’d be patient with downgrades by a foreign ratings company that could make it difficult for a troubled borrower to refinance.

Yet regulators in Beijing recognize that allowing credit to be priced based on the risk of the borrower could make investment across the economy more efficient. The People’s Bank of China says a certain amount of defaults can be healthy. And it sees foreign investors as a catalyst for reform. Given that those investors would prefer ratings akin to what they’re used to elsewhere, China in 2017 opened the door to the big three global ratings companies to operate wholly owned units.

S&P has hired at least 30 analysts for its Beijing office, preparing to open for business soon, says Simon Jin, chief executive officer of the company’s new China unit. The question on the minds of observers is just how S&P, along with Moody’s Investors Service and Fitch Ratings—if and when they follow—will manage to produce ratings that enjoy the confidence of international investors while also expanding business in a market that may not welcome hard truths about creditworthiness. Jin says “there is genuine demand for objective and reliable ratings in China” and that S&P plans “to provide Chinese market participants the same standards of transparency and independent analysis as we do anywhere else in the world.”

China’s growth since it began to open up over the last few decades has been supported by protectionism on the one hand but by outright support for domestic industry on the other. That manifested itself in free land for factories, generous open- ended credit availability through the banks, zero to low taxation, lax or no regulation, ignoring environmental standards and the creation of markets for the products produced. That resulted in rampant credit growth and, with clear government support, there were very low credit standards provided it served the national interest of industrialisation and full employment.

The decision to allow defaults was not taken lightly but was necessary in the aftermath of the record stimulus following the credit crisis where loan growth accelerated. In order to avoid a bursting bubble the Chinese administration embarked on substantial credit market reform. The introduction of western credit agencies, admittal bad loans do in fact need to default or be restructured and the introduction of foreign investors to the corporate bond market all represent strands of the broad strategy to de-risk the credit markets. 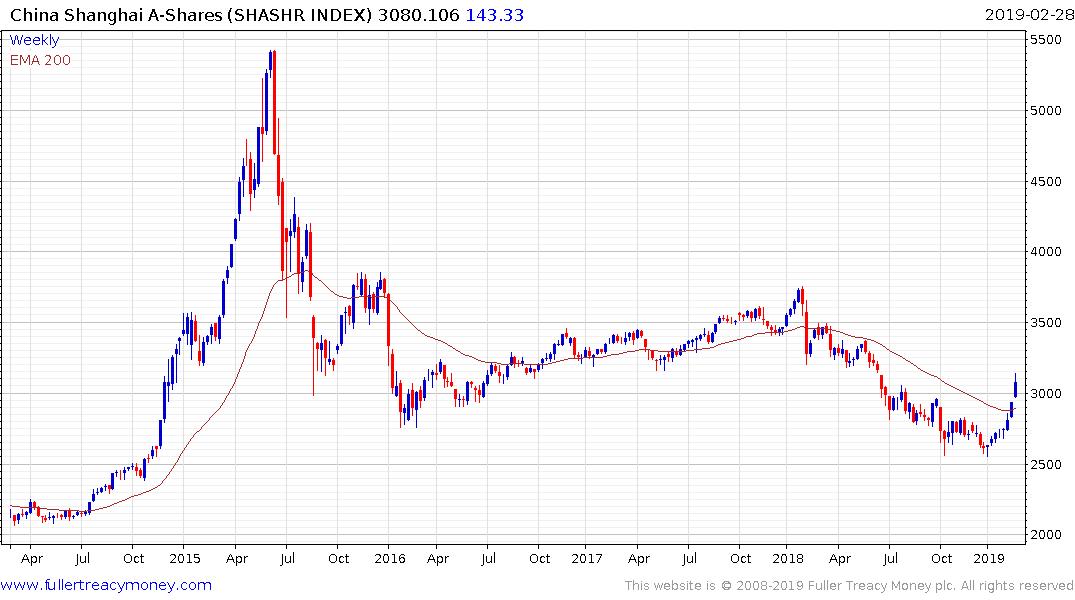 With the curtailment of the shadow banking sector now complete, with PMI figures squarely in contraction territory and with a widening of the tax net underway, the time to provide both monetary and fiscal stimulus, lest an economic contraction take hold, is now.

The rallies underway in the Chinese and European markets potentially portend a global reflation trade and are particularly worth monitoring.