In 2018, Diplomats Warned of Risky Coronavirus Experiments in a Wuhan Lab. No One Listened
Comment of the Day

In 2018, Diplomats Warned of Risky Coronavirus Experiments in a Wuhan Lab. No One Listened by Eoin Treacy

A little-noticed study was released in early July 2020 by a group of Chinese researchers in Beijing, including several affiliated with the Academy of Military Medical Science. These scientists said they had created a new model for studying SARS-CoV-2 by creating mice with human-like lung characteristics by using the CRISPR gene-editing technology to give the mice lung cells with the human ACE2 receptor — the cell receptor that allowed coronaviruses to so easily infect human lungs.

After consultations with experts, some U.S. officials came to believe this Beijing lab was likely conducting coronavirus experiments on mice fitted with ACE2 receptors well before the coronavirus outbreak—research they hadn’t disclosed and continued not to admit to. In its January 15 statement, the State Department alleged that although the Wuhan Institute of Virology disclosed some of its participation in gain-of-function research, it has not disclosed its work on RaTG13 and “has engaged in classified research, including laboratory animal experiments, on behalf of the Chinese military since at least 2017.” That, by itself, did not help to explain how SARS-CoV-2 originated. But it was clear that officials believed there was a lot of risky coronavirus research going on in Chinese labs that the rest of the world was simply not aware of.

“This was just a peek under a curtain of an entire galaxy of activity, including labs and military labs in Beijing and Wuhan playing around with coronaviruses in ACE2 mice in unsafe labs,” the senior administration official said. “It suggests we are getting a peek at a body of activity that isn’t understood in the West or even has precedent here.”

This pattern of deception and obfuscation, combined with the new revelations about how Chinese labs were handling dangerous coronaviruses in ways their Western counterparts didn’t know about, led some U.S. officials to become increasingly convinced that Chinese authorities were manipulating scientific information to fit their narrative. But there was so little transparency, it was impossible for the U.S. government to prove, one way or the other. “If there was a smoking gun, the CCP [Communist Party of China] buried it along with anyone who would dare speak up about it,” one U.S. official told me. “We’ll probably never be able to prove it one way or the other, which was Beijing’s goal all along.”

Back in 2017, the U.S. diplomats who had visited the lab in Wuhan had foreseen these very events, but nobody had listened and nothing had been done. “We were trying to warn that that lab was a serious danger,” one of the cable writers who had visited the lab told me. “I have to admit, I thought it would be maybe a SARS-like outbreak again. If I knew it would turn out to be the greatest pandemic in human history, I would have made a bigger stink about it.”

China is the wild west for medical research. The moral, ethical and safety considerations that slow down research in much of the developed world are ignored in China. That means if one wants to do research that would be frowned upon at home, you will find a welcome in China. The result is that all manner of experiments with new biomedical technology are taking place, often behind closed doors.

Subscribers might remember the story of babies born where their DNA had been edited to make them immune to HIV in 2019. The whole story about the HIV was a red herring. Why would anyone edit out HIV susceptibility? It’s not a common threat and drugs exist to control infection in new-born children. Instead, the same gene which was edited is also linked to memory and learning.  Therefore, isn’t much more likely that the aim of the research was to enhance intelligence.

Marvel movies are very popular in China and it appears someone watched the Captain America evolution story. There have been a number of stories focusing on human testing for “biologically enhanced capabilities”.

China is also the world centre for organ transplants often with forced harvesting. Meanwhile the ongoing mass sterilisation of the Uighur population makes a nonsense of the one-child policy. It’s more like the no-child policy.

One example might be an anomaly. Instead, what we see is a trend. Given the opacity of data, it would be foolish to avoid the conclusion that China has an advanced program for biowarfare.

They certainly have an advanced anti-aircraft carrier ballistic missile. The Chinese navy now also has more ships than the US navy and is spending more on physical apparatus. It might lag in gross tonnage because a lack of aircraft carriers but that’s not a permanent condition.

To give a full account of all of China’s cyber activity would be impossible but suffice to say it is both pervasive, effective and omnipresent.

China’s stock market trades at a valuation discount for a reason. Investors have been attracted to the market because of the stronger currency, growth rate and yield. There appears to be very little appreciation for the risk that the world’s relationship with China will continue to sour. 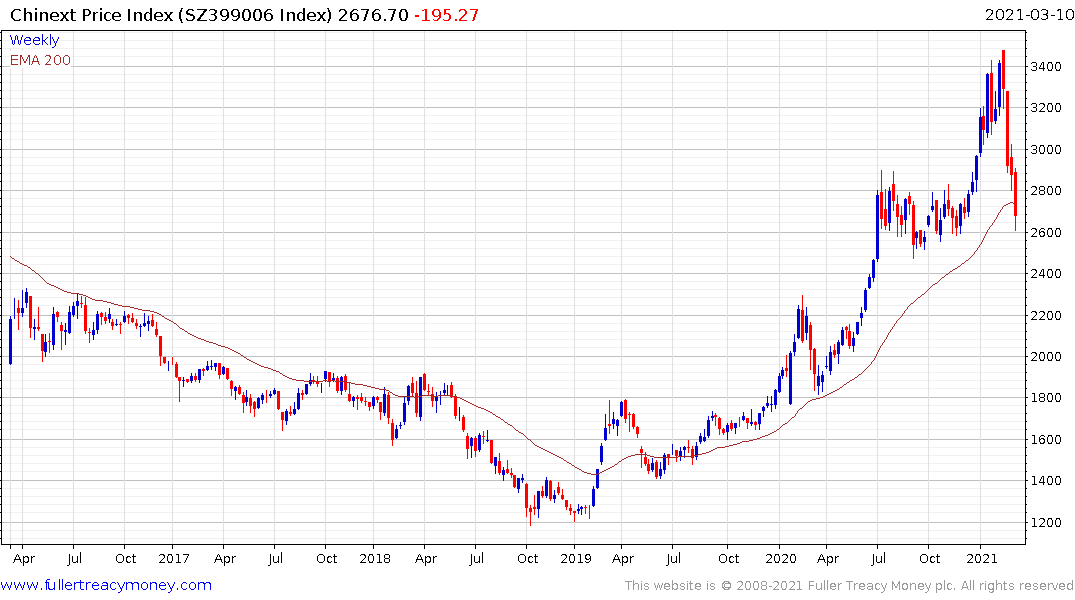 Meanwhile the ChiNext Index has pulled back to the region of the trend mean, in sympathy with the wider global innovation sector.