In the (unlikely) absence of any control measures or spontaneous changes in individual behaviour, we would expect a peak in mortality (daily deaths) to occur after approximately 3 months (Figure 1A). In such scenarios, given an estimated R0 of 2.4, we predict 81% of the GB and US populations would be infected over the course of the epidemic. Epidemic timings are approximate given the limitations of surveillance data in both countries: The epidemic is predicted to be broader in the US than in GB and to peak slightly later. This is due to the larger geographic scale of the US, resulting in more distinct localised epidemics across states (Figure 1B) than seen across GB. The higher peak in mortality in GB is due to the smaller size of the country and its older population compared with the US. In total, in an unmitigated epidemic, we would predict approximately 510,000 deaths in GB and 2.2 million in the US, not accounting for the potential negative effects of health systems being overwhelmed on mortality.

For an uncontrolled epidemic, we predict critical care bed capacity would be exceeded as early as the second week in April, with an eventual peak in ICU or critical care bed demand that is over 30 times greater than the maximum supply in both countries (Figure 2). The aim of mitigation is to reduce the impact of an epidemic by flattening the curve, reducing peak incidence and overall deaths (Figure 2). Since the aim of mitigation is to minimise mortality, the interventions need to remain in place for as much of the epidemic period as possible. Introducing such interventions too early risks allowing transmission to return once they are lifted (if insufficient herd immunity has developed); it is therefore necessary to balance the timing of introduction with the scale of disruption imposed and the likely period over which the interventions can be maintained. In this scenario, interventions can limit transmission to the extent that little herd immunity is acquired – leading to the possibility that a second wave of infection is seen once interventions are lifted.

A friend in San Francisco was skiing in Colorado last week with ten friends. They are all now sick and one has been diagnosed. On Monday he was feeling ill and running a temperature of 103 so he called the CDC. They called back in about half an hour, told him to shelter in place, avoid the ER and gave him an appointment to be tested three days later. Today he is having difficulty breathing and still has not been tested.

The need for aggressive and prolonged testing regimes is the basic requirement to get on top of the pandemic. There isn’t much evidence to support the view the authorities in the UK and USA are in a position to follow up on multiple promises yet. The Trump administration is now deploying domestic industry to support the production of materials to fight contagion. All of that takes time and time is of the essence. 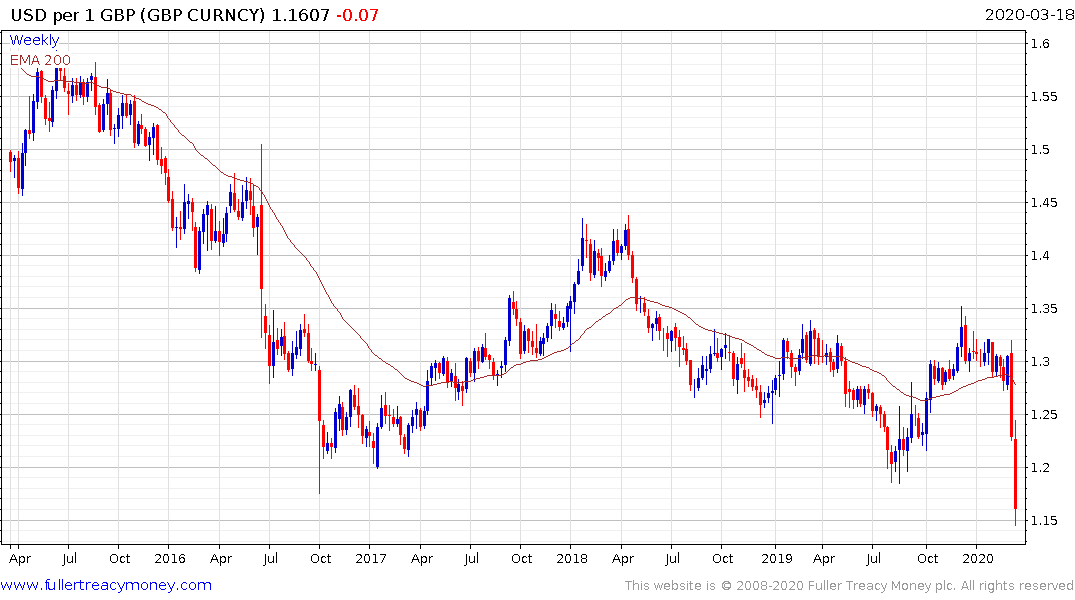 The Pound pulled back by almost 5% today. That’s a clear acceleration of the declining trend which takes the currency to a new multi-decade low. The haphazard response of the UK authorities to the viral outbreak and the risk to the City from imploding leverage are both weighing on the currency. The medium-term effect is it will greatly enhance UK competitiveness once the worst of the pandemic passes. 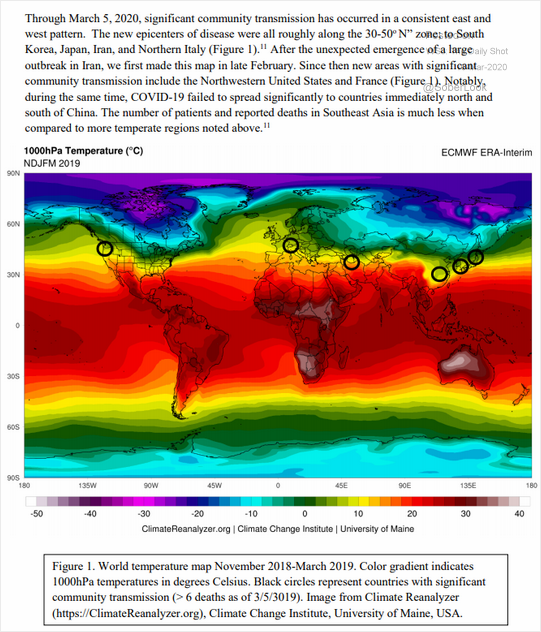 An additional point worth considering is the widespread contention the virus is easier to contain in hot humid countries. There are 790 cases in Malaysia and Indonesia reported a significant number of deaths today. My concern with putting blind faith in the below graphic is we only have about ten weeks of data. That is just not enough to draw scientific conclusions.