Despite this, sensitivity to popular feeling is clearly strong. Many people worry about a crisis in Wealth Management Products (WMPs), which amount to RMB10 trillion in assets (almost AUD 2 trillion). China has a very high savings rate but savers do not have a lot of attractive options. Official deposit rates are controlled at a low level (below inflation), it is not possible to invest significant amounts abroad, the stockmarket has been a poor performer despite fantastic GDP growth and corporate governance can be suspect, and the property market boasts some bubble characteristics and the government makes it hard to own property other than one’s principal residence.

Apparently couples sometimes get divorced so that they can buy two properties! The paucity of investment options has pushed savers into a hunt for “safe” yield, in a similar trend to what has happened elsewhere for somewhat different reasons, and that has lead them to WMPs. Issued but not underwritten by banks, the WMPs have channelled money to poor credits including developers, entrepreneurs and local government schemes. Even the governor of the People’s Bank of China referred to the WMPs as a Ponzi scheme given the actual returns on investments do not match the returns promised to investors. They may yet cause a crisis but for now people believe WMPs are guaranteed by the issuing banks. The government forced a sponsoring bank of a failed WMP, that was not actually legally liable, to repay savers’ investments in full after a protest outside the bank and a storm on social media.

The pressures on the Chinese financial system have been remarked on extensively in the media. The equal pressure on those who seek to preserve their wealth through investments is less publicised. China’s government might be the world’s largest creditor but China’s population are the world’s largest savers.

Property has long been seen as a sound investment not least because of cultural influences but also because prices have been rising at least in line with GDP growth for decades. More recently gold has also become an avenue for investment and a number of banks offer gold backed savings accounts. The creation of the preferred share market offers fresh opportunities for corporations to seek capital but also creates an additional avenue for investors to seek yield. Plans are underway to bolster the corporate bond market and to liberalise the deposit rates paid to savers but these are medium-term objectives.

The stock market is widely perceived to be rigged and its performance has been far from confidence inspiring. The result is that investors seeking yield have invested in high yield type structures. The lack of a comprehensive rating system makes assessing the corporate creditworthiness difficult and the threat that banks may be forced to support structures they helped sell contributes to their low valuations. A catalyst such as the government ringing the bell for the bottom of the stock market by announcing a concerted purchase program would act as a positive catalyst for the market. (Also see yesterday’s piece on this subject. 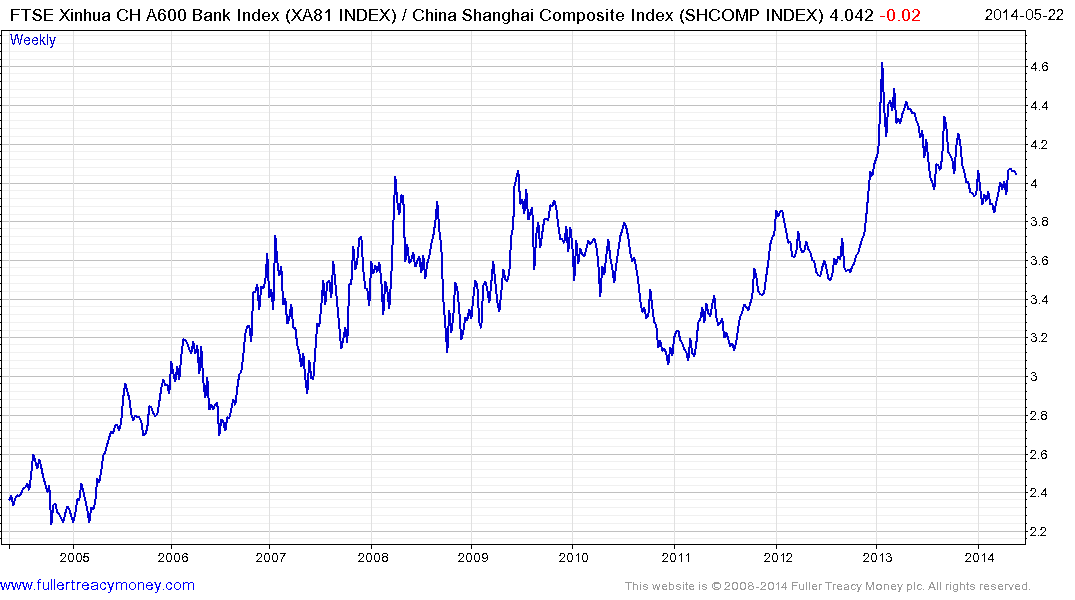 Despite the fact the perceptions towards the banking sector remain extremely negative the FTSE Xinhua A600 Banks Index has been broadly outperforming the Shanghai Composite since 2011. The ratio has held a progression of lower rally highs over the last year and returned to test the broad uptrend in March. It will need to at least hold that low, and break the 12-month progression of lower rally highs if medium-term potential for additional outperformance is to remain credible. In absolute terms, the sector remains rangebound. 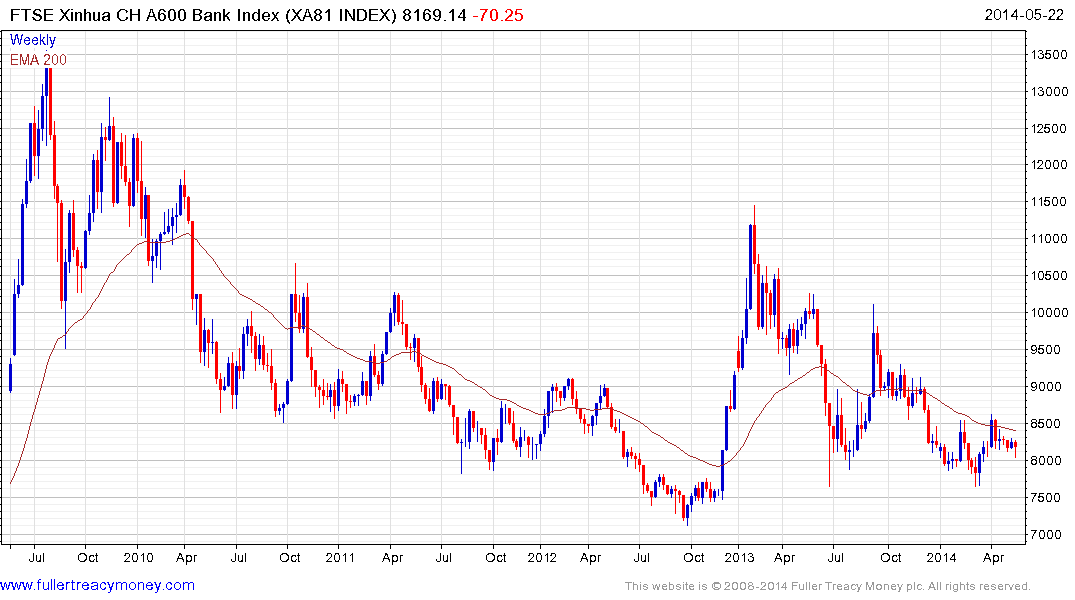