The prospects for boosting prosperity for the average Indian are strong. A study by the Brookings Institution1 found that India is slated to become one of the leading sources of middleclass demand in the coming decades (that is, people who spend $11 to $110 a day). India’s per capita income is expected to double to $4,500 by 2030 which, in real per capita income terms, will constitute close to 5.5 per cent average annual growth through the next decade. This means India should account for 17 per cent of global middle-class consumption, just behind China on 22 per cent and ahead of US on seven per cent. This level of consumption growth has tremendous implications for investment opportunities in different sectors of the economy, particularly infrastructure, banking, utilities, and industrials.

There are two other factors that will help drive growth over the coming decade. The first is a proper bankruptcy law which only came into force in 2017. This will help to reduce crony capitalism and incentivise proper risk assessment. It will also make the banking sector more credible and boost transparency and resiliency in the financial system over the next decade. The banking sector itself will likely be very different by the end of the next decade as the public sector banks consolidate. Already, the government has announced merging ten public sector banks into four entities. This should reduce their share in the banking system from the current level of 70 per cent, while private sector banks commensurately grow their market share.

The second factor that will drive growth is the Reserve Bank of India’s move a few years ago to adopt inflation targeting and establish positive real interest rates in the economy. This, coupled with the government’s focus on bringing more transparency into the real estate sector, have started a seemingly irreversible structural shift of household savings from physical to financial assets. This trend will likely accelerate in the decade ahead. Our preliminary calculations suggest the share of financial savings in total household savings is likely to touch 55 per cent by 2030, up from 40 per cent currently. Most of these incremental household savings are likely to find their way into India’s capital markets which will boost its prospects in the medium term.

The easiest prediction to make is that by 2030 ten years will have passed. The 600 million people under the age of 25 now living in India will be ten years older and hundreds of millions of them will be in their prime productive years. The only country that has had a demographic boom of that scale is China. India’s population is larger and its standards of governance defined by minority shareholder interests, an independent judiciary and free press are more attractive to a long-term investor.

India is not a panacea, however, corruption remains an issue. The government has expressed antipathy towards foreign companies being disruptive forces in the economy and infrastructure remains a challenge. 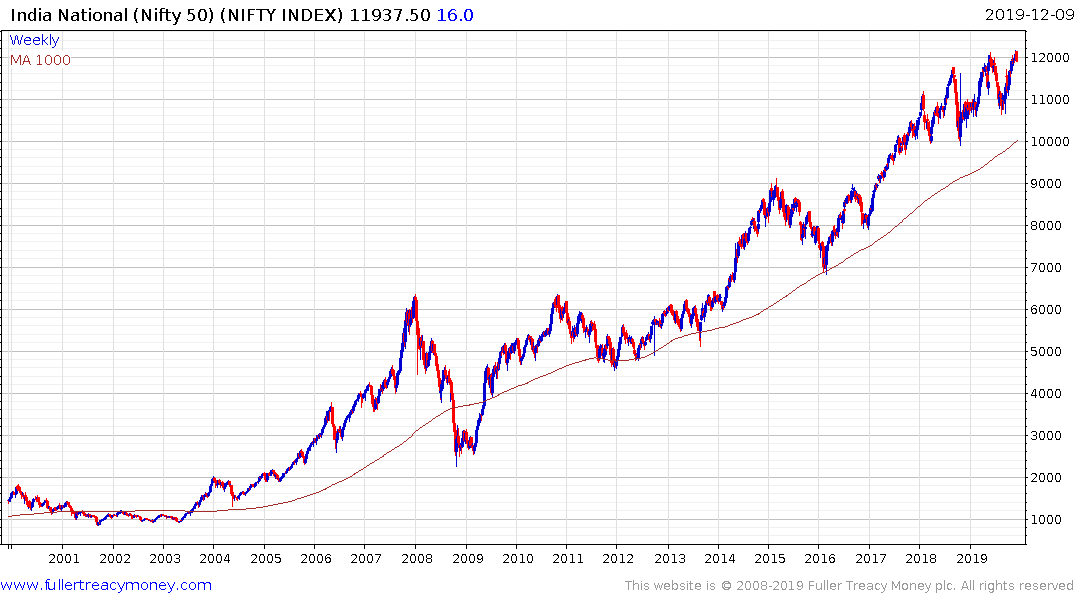 If we address India’s long-term chart pattern I believe it is fair to conclude there have been some rather extreme pullbacks but the impressive overall upward bias has remained intact. I find it particularly interesting that the Index has tended to find support in the region of the 1000-day moving average, during crises since 2004. A sustained move below that measure would be required to begin to question the secular bull market hypothesis despite the short-term overbought condition.