llumina Inc. plunged as much as 28 percent, the most in five years, after saying third-quarter sales were lower than it previously anticipated because of declining demand for its high-speed genetic sequencers.

?Sales were about $607 million last quarter, the company said Monday in a statement after the markets closed. That’s below Illumina’s July forecast of $625 million to $630 million, and the $628 million average of analysts’ estimates compiled by Bloomberg.

“We are clearly disappointed by the preliminary revenue result,” Chief Executive Officer Francis DeSouza said Monday in a short call with investors. Revenue from sequencing instruments declined 26 percent year-over-year, a bigger drop than anticipated at the start of the quarter, he said.

From what I learned by talking to people at the ExMed conference over the last four days has been that there is enormous disruption emerging in the sequencing of DNA. The method used over the last 50 years is being superseded by new technology and that represents a challenge for Illumina because it is the leader in providing the machines used today to sequence DNA. 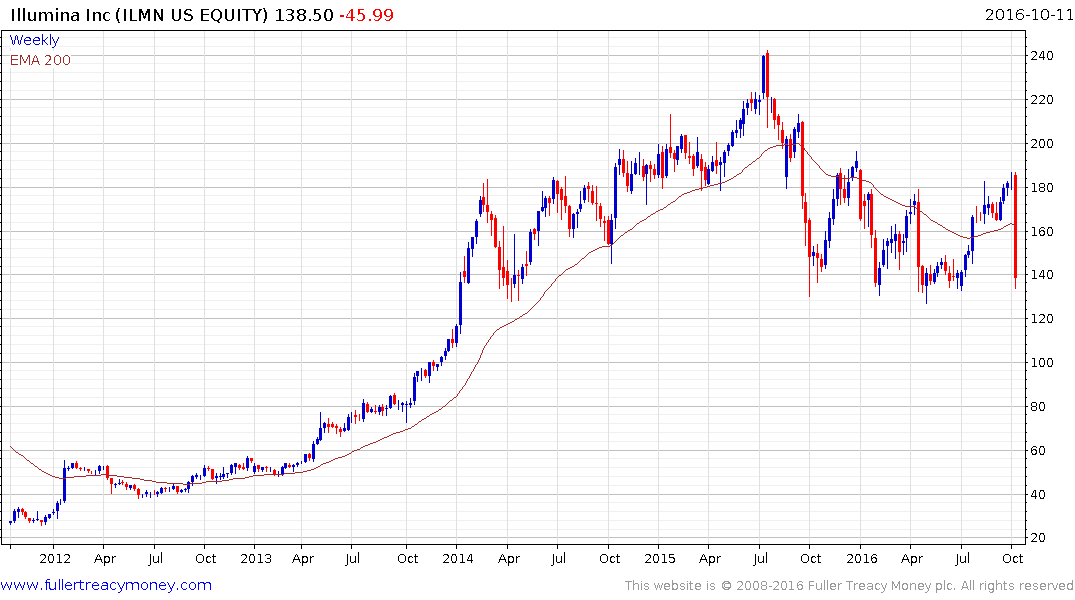 The share had been trading above the 200-day MA and had broken a medium-term progression of major rally highs. Today’s downward dynamic countermanded that more positive bias. While there is potential for some steadying in the region of the lower side of the yearlong range a sustained move above $175 would be required to begin to challenge medium-term supply dominance.