So what's up? According to German Chancellor Angela Merkel, "We want the electricity of the future to be safe, reliable and economically viable." And in her mind, nuclear power doesn't fit the bill anymore.

She's wrong. The truth is, nuclear power is safe, reliable, clean and cheap. And that's precisely why global nuclear capacity is going to keep increasing, by as much as 50% between now and 2020.

It's also the reason why the long-term investment thesis for uranium stocks remains compelling.

As humans, we have a tendency toward recency bias. In other words, we give recent events extra importance when making decisions. The recent radiation crisis in Japan is an example. I'm certainly not going to downplay the issue; the fallout from the earthquake and tsunami has been terrible and the loss of life is tragic.

However, believing that nuclear power is now suddenly unsafe is patently wrong. As the following chart shows, nuclear power is actually the safest form of energy production available. And if anything, the crisis at Japan's 40-year-old Fukushima Daiichi plant is only going to increase the safety precautions at existing and new nuclear power plants. 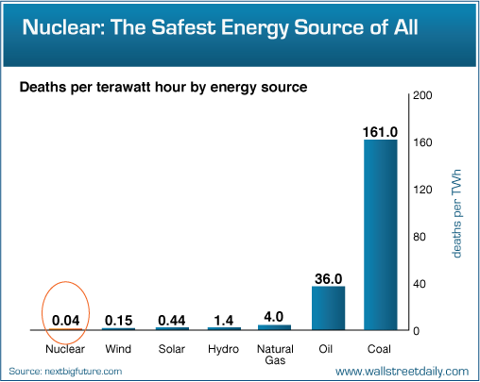 David Fuller's view I favour nuclear power because I am concerned about climate change and also the risk of a serious energy shortage over the next decade.

To repeat a Fullermoney view: We maintain that the global energy supply / demand balance will remain uncomfortably tight, more often than not, until shale gas and also shale oil are in full production on a worldwide basis. This will take time. Meanwhile, a delay in the building of modern nuclear reactors, not to mention the closing of or failure to replace older plants will only increase the risk of serious energy shortages.

Developing countries pursuing rapid economic growth in order to lift more of their citizens out of poverty will be less affected by the contentious debate over nuclear power. They will also be under less pressure to fortify and insure their nuclear reactors against every possible imagined terrorist attack. Consequently, they will be able to buy in more cheaply - or develop as we see with China - the most modern, efficient and safest nuclear technology available. Over the long term, this same mindset should enable growth economies to also buy in or develop the most effective renewable forms of energy.

While on holiday in Hay-on-Wye last week, I saw a small news item reporting an accident at an oil refinery in Wales which killed four people. As news, this unfortunate incident had little more shelf life than an automobile accident with the same consequences. However, just imagine the furore if four people had died during an accident at one of the UK's aged nuclear power stations.

From an investment perspective, holders of uranium and the shares which mine it during the next few years of this post Fukushima era may require the patience of the divine. So did investors in gold shares, as those with long memories may recall. Uranium could not be more different from gold but it is an industrial metal with extraordinary properties. Consequently, its usage by the energy industry should only increase over the longer term. Meanwhile, countries which develop their nuclear power industries significantly over the next twenty years will take an important step towards energy independence. This can only enhance their long-term economic prospects.


Energy is a Fullermoney secular theme, as is mining. However, if I wanted to invest in a recovery candidate today, I would prefer a high-yielding, previously very out of favour, defensive share such as Drax Group PLC (DRX LN) (weekly & daily), which yields 6.7% trades at a PER of under 10 and appears to have a reasonable balance sheet.