The bank, which raised 150 billion rupees in August to bolster its capital ratios, set aside 29.95 billion rupees, nearly a third of 75.94 billion rupees of provisions in the previous quarter. ICICI Bank had pegged it at 25.07 billion rupees a year earlier. The gross bad loan ratio was also lower at 5.17%, compared with 5.46% at the end of June. Net interest income rose 16% from a year ago.

The lender did not make any additional provisioning for Covid-19 induced bad loans as it had “frontloaded” them in June quarter, said Sandeep Batra, President of ICICI Bank, adding that he expected a “more normalized” financial year starting April 1. Lower tax payout in the second quarter from a year earlier also helped the bottom line.

“We are focused on risk calibrated growth,” Batra said adding that the bank saw its highest ever home loan disbursements in September. “Covid related impact won’t be there next year as economic activity is coming back.”

If banks are making money it is because of demand for credit and a positive carry. If we look around the world, the only places where there is organic growth in the banking sector is in the emerging markets where demographics and a steep yield curve support their business model.

India has a 350 basis-point pick up between 3-month and 13=year maturities which is a key support for the banking sector. The headwind from non-performing loans has been ameliorated by significant monetary and fiscal stimulus. That’s true for just about all of the banking sector.

Meanwhile the economic impact from the pandemic is likely to be less severely felt by younger populations. That suggests they are in a much stronger position to bounce back and will also benefit from the search for manufacturing centres beyond China. 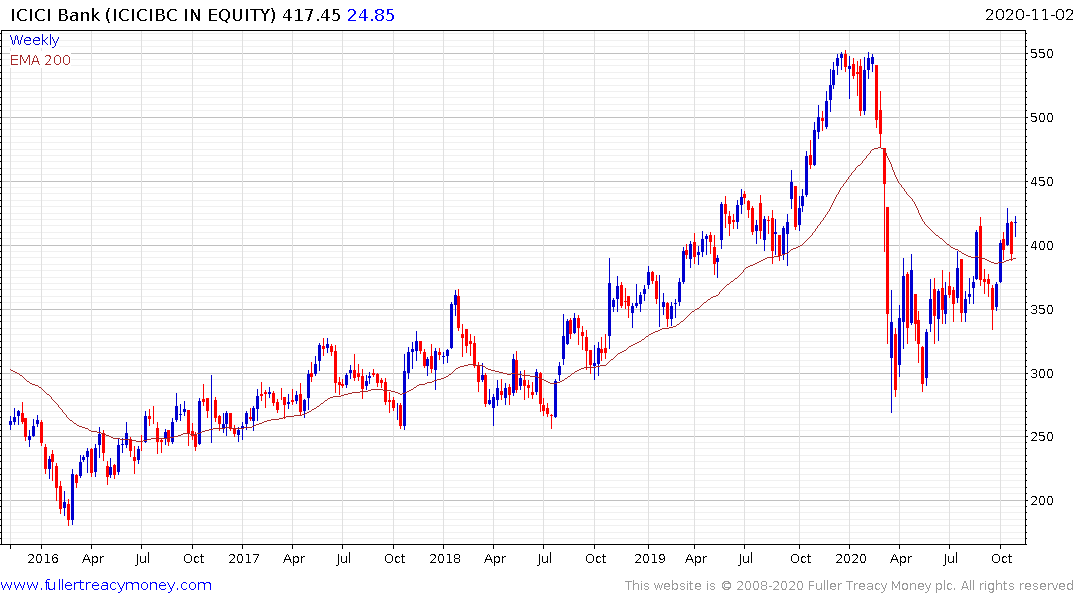 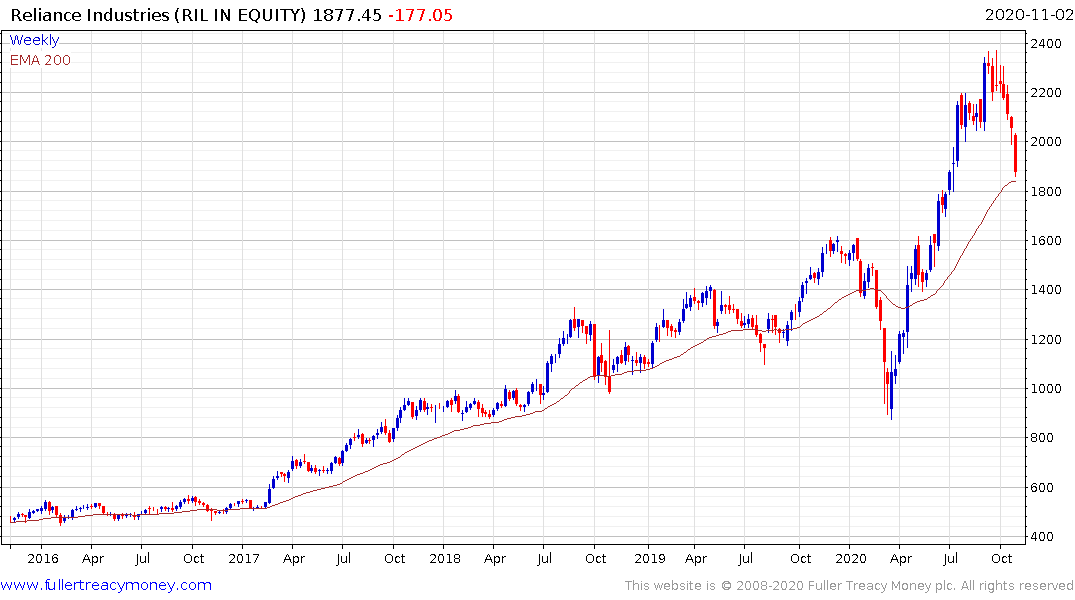 ICICI has a similar pattern to the Bombay Banks Index over the last six months and continues to hold a sequence of higher reaction lows. Banks led on the upside today while Reliance Industries pulled back on the weakness in the oil market.

Here is a section from the report from DWS supporting the view India is likely to be one of the primary beneficiaries of the migration of manufacturing from China:

Notwithstanding the challenges from a steep recession, lower growth potential and fiscal deterioration, we think there are likely to be opportunities and strengths mitigating the risks in the medium term. Past and ongoing reforms have substantially improved India‘s competitiveness. State governments have recently eased labor laws and improved industrial compliance. In addition, India could be a potential winner from the diversification away from China’s supply chain. India is currently the third most desired destination for business relocation out of China after Vietnam and Thailand. We believe that this could attract more foreign direct investment inflows into India in the future which could help to counter the dent in potential growth.