I'm A Twenty Year Truck Driver, I Will Tell You Why America's "Shipping Crisis" Will Not End
Comment of the Day

I'm A Twenty Year Truck Driver, I Will Tell You Why America's "Shipping Crisis" Will Not End by Eoin Treacy

How do you convince truckers to work when their pay isn’t guaranteed, even to the point where they lose money?

My prediction is that nothing is going to change and the shipping crisis is only going to get worse. Nobody in the supply chain wants to pay to solve the problem. They literally just won’t pay to solve the problem. At the point we are at now, things are so backed up that the backups THEMSELVES are causing container companies, ports, warehouses, and trucking companies to charge massive rate increases for doing literally NOTHING. Container companies have already decreased the maximum allowable times before containers have to be back to the port, and if the congestion is so bad that you can’t get the container back into the port when it is due, the container company can charge massive late fees. The ports themselves will start charging massive storage fees for not getting containers out on time — storage charges alone can run into thousands of dollars a day. Warehouses can charge massive premiums for their services, and so can trucking companies. Chronic understaffing has led to this problem, but it is allowing these same companies to charge ten times more for regular services. Since they’re not paying the workers any more than they did last year or five years ago, the whole industry sits back and cashes in on the mess it created. In fact, the more things are backed up, the more every point of the supply chain cashes in. There is literally NO incentive to change, even if it means consumers have to do holiday shopping in July and pay triple for shipping.

I was at the bonded warehouse in Dallas this morning to pick up Mrs. Treacy’s Christmas inventory. There is a great deal of talk at present about the supply chain crisis so I thought subscribers might be interested to know how long it took for us to get our goods.

The biggest issue Mrs. Treacy faced was on the manufacturing front. She can’t go to China and therefore had to rely on the strength of relationships and hope for the best. Even though she ended up paying more for inventory because of rising wages in China, it is inevitable that quality control will have been abandoned. Manufacturing was two months late because the migrant workers the factor relies on could not travel because they were locked down.

The ship was eventually loaded on September 24th and the goods arrived in Dallas on October 28th. That implies a week-long delay at the port which is nothing out of the ordinary. In fact, her goods have been selected for customs inspections in the past and the delay was two to three weeks, so this is nothing special. The process for receiving the goods at the warehouse was seamless; much quicker and with fewer checks than in Los Angeles. 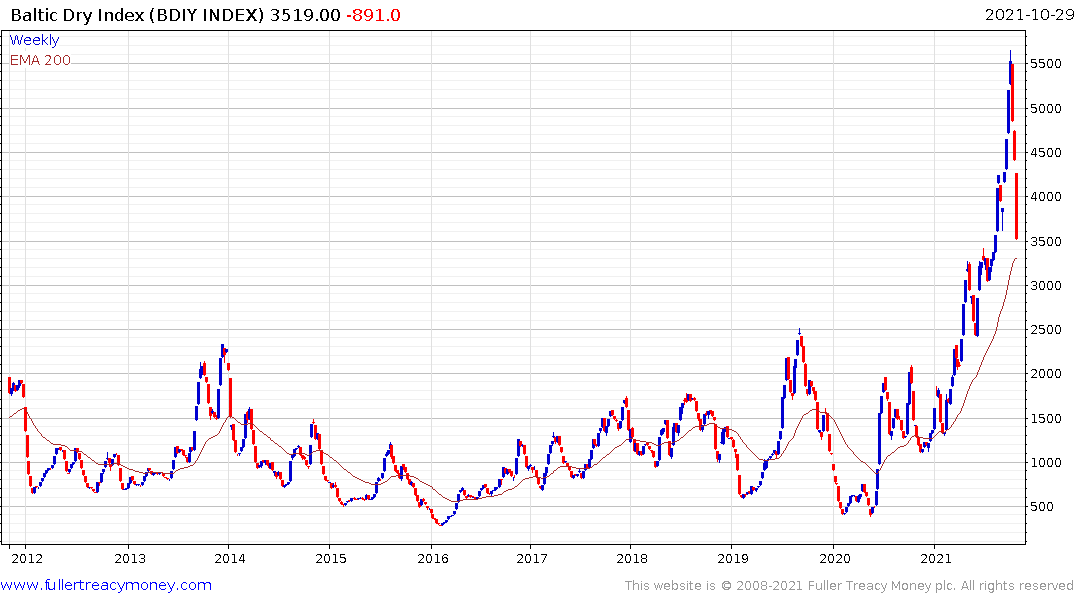 The Baltic Dry Index has surged since the pandemic low but the pre-pandemic high was 2000 and the current level is 3500 so all the talk of 10 times increases is an excuse to raise prices. When Mrs. Treacy calculated her margin this morning, she concluded the manufacturing cost increase was much more significant than the shipping cost increase.

The supply chain bottlenecks in Chicago are real and they will take time to iron out but they will be ironed out. Many people close to retirement probably will not be coming back to work, so some time for adjustment is probably required. That does not mean the whole world is going to collapse. All this implies that companies are actively moving to increase margins during this episode and that is good for stock prices.

Nevertheless, Amazon’s cut-off to receive goods at its warehouses, so they will be available for the holidays, is the first week of December. Therefore, it is probably a good idea to get one’s holiday shopping done early this year.