Hydrogen May Start Replacing Natural Gas Before 2050, Snam Says
Comment of the Day

“There is already a transition going from coal to gas, which is very beneficial for the environment,” Alvera said. “The next step of the transition is getting away from oil and replacing to gas. After we do that phase one, we can ramp up electrolyzers and have green gas.”

The executive’s view about hydrogen reflects concern within the gas industry that governments are moving to limit fossil-fuel emissions and will hit gas soon. That raises the risk that the investments they’ve made in pipelines, compressors and storage tanks could become stranded assets.

In Italy, Snam decided to double the amount of hydrogen it blends into the grid to 10%. Alvera believes hydrogen could supply a quarter of Italy’s energy demand by 2050 and announced in November a new round of investments to boost transition toward clean energy.

Hydrogen stocks are having a moment. In any bull market there needs to be a demand narrative which encourages a supply response. The element’s energy density and clean burning characteristics are burnishing the argument for using more hydrogen as the desire to promote a zero carbon energy sector gains ground. The future of air travel is probably going to include cryogenic hydrogen but that is still a ways off. Meanwhile the low price of natural gas encourages experimentation because the cost of producing hydrogen is compressing.

Auto companies like Toyota, Daimler and Hyundai spent a great deal of money researching fuel cells. They are now attempting to bring this investment to commercial reality as they attempt to react to the growth of the battery sector relative to internal combustion engines. In the above article, the belief hydrogen will be cost competitive with natural gas depends on renewable sources providing ample supply because right now hydrogen is produced primarily using natural gas as the base component. 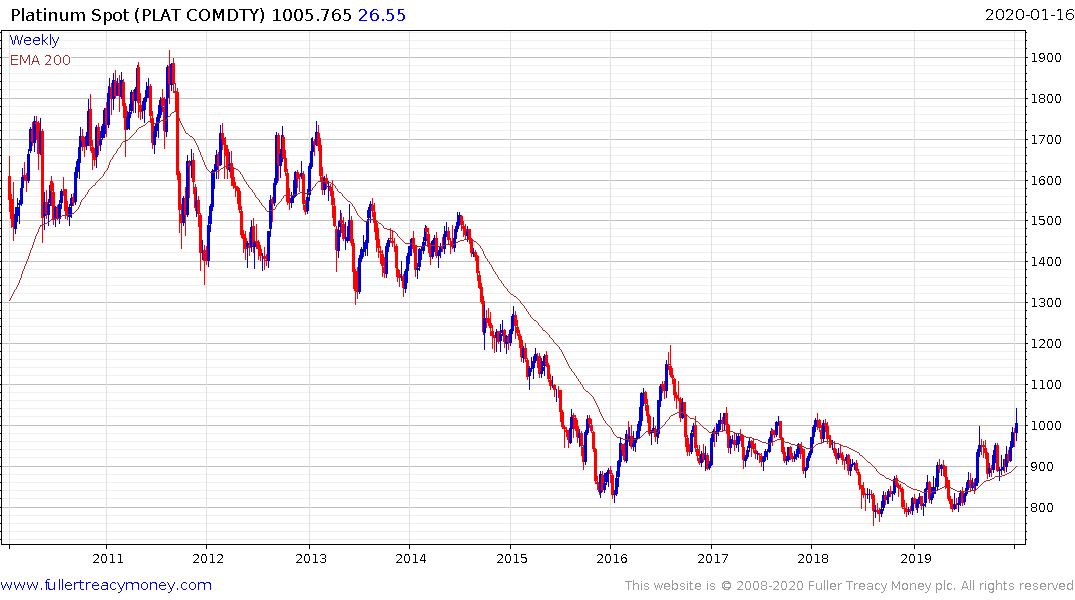 Platinum broke above the psychological $1000 level yesterday and dropped back to retest that area today. A sustained move above $1000 would confirm a return to demand dominance beyond the short term. Platinum is trading at an historically wide discount relative to gold and platinum and is still close to its relative lows against silver. That suggests ample scope for outperformance from current levels if the right conditions are manifested.