Haldane has said Britain’s economic bounce back from the coronavirus-induced recession is looking V-shaped so far. Not all his colleagues on the Monetary Policy Committee seem comfortable with that view though -- Silvana Tenreyrohas warned of a likely flattening off later in the year and Governor Andrew Bailey has said there are a “lot of hard yards” ahead.

A compilation of forecasts published by the U.K. Treasury on Wednesday also showed a gloomy shift among economists. The average prediction for 2020 is now a 10% contraction, versus 9.2% in July.

Martins now reckons the British economy will shrink more than 10% this year, and still be almost 5% smaller than its pre-virus level by the end of next year. That’s somewhat more downbeat than the BOE’s projections.

Still, she’s not forecasting any more monetary easing by the BOE just yet, saying further fiscal stimulus from the government is more likely. If the BOE does need to act, as most economists believe, she predicts more bond-buying, easier loans for companies, and potentially another cut to the 0.1% benchmark interest rate.

The UK administration was caught flatfooted by the onset of the coronavirus. As with other late-acting countries, the early resistance to a lockdown contributed to widespread community spread. It means the recovery will be inhibited by the need to tackle large numbers of potential infection vectors. However, there will be a recovery. That will be achieved either by communities learning to live with the virus, a vaccine or community immunity. 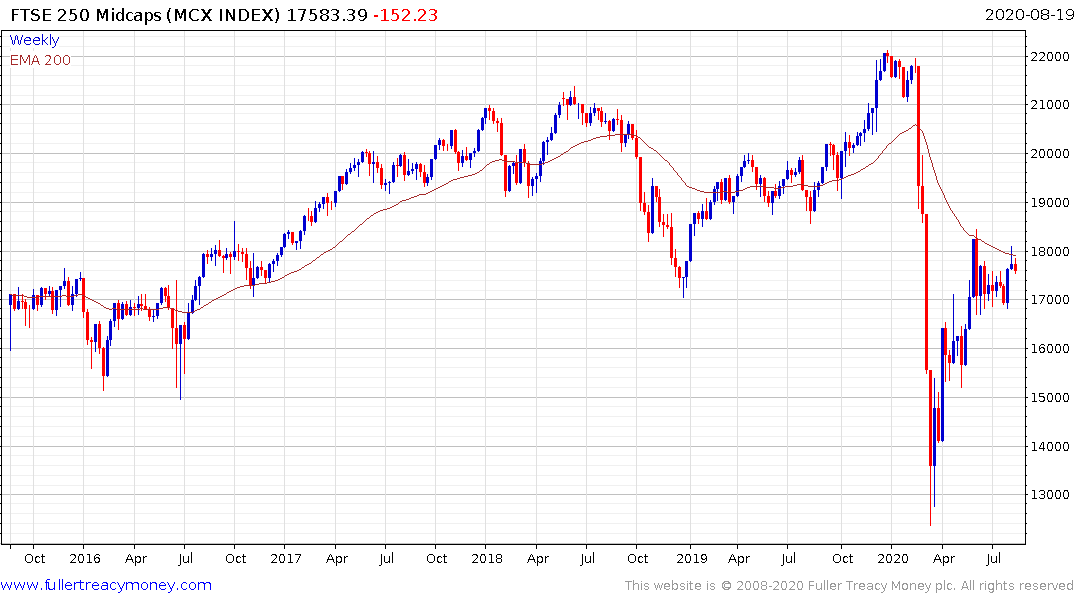 That’s what the stock market is pricing in. The quick rebound to the trend mean has now paused in the FTSE-250. This lower side of the overhead trading range and proximity of the 200-day MA are natural areas for some reassessment.

Meanwhile the Bank of England has been providing less liquidity of late. The correlation between the willingness of central banks to assist has been the primary tailwind for risk assets everywhere. Yields out to 7-year maturities had been negative until last week. The 7-year has now broken the short-term sequence of lower highs.

There has been a lot of talk about the potential for formal yield curve control in the USA but it is equally a risk elsewhere. Every government has borrowed heavily to blunt the impact of lockdowns. Rising borrowing costs represent pressure on interest expense for every government. Rising yields suggest less fear of deflation, the bigger question is whether the central bank is willing to step in a avert a significant challenge from rising rates.