How to Save Europe by Eoin Treacy

But since the financial crisis of 2008, the EU seems to have lost its way. It adopted a program of fiscal retrenchment, which led to the euro crisis and transformed the eurozone into a relationship between creditors and debtors. The creditors set the conditions that the debtors had to meet, yet could not meet. This created a relationship that was neither voluntary nor equal – the very opposite of the credo on which the EU was based.

As a result, many young people today regard the EU as an enemy that has deprived them of jobs and a secure and promising future. Populist politicians exploited the resentments and formed anti-European parties and movements.

Then came the refugee influx of 2015. At first, most people sympathized with the plight of refugees fleeing political repression or civil war, but they didn’t want their everyday lives disrupted by a breakdown in social services. And soon they became disillusioned by the failure of the authorities to cope with the crisis.

When that happened in Germany, the far-right Alternative für Deutschland (AfD) rapidly gained strength, making it the country’s largest opposition party. Italy has suffered from a similar experience recently, and the political repercussions have been even more disastrous: the anti-European Five Star Movement and League parties almost took over the government. The situation has been deteriorating ever since. Italy now faces elections in the midst of political chaos.1

Indeed, the whole of Europe has been disrupted by the refugee crisis. Unscrupulous leaders have exploited it even in countries that have accepted hardly any refugees. In Hungary, Prime Minister Viktor Orbán based his reelection campaign on falsely accusing me of planning to flood Europe, Hungary included, with Muslim refugees.

The expansion of social programs and rising debt commitments to help pay for them over the last thirty-five years resulted in a narrowing of political choice with parties in power bunching around conventional centrist policies.  The response of the status quo to the credit crisis was to double down on the policies they had employed over the last decades which was to massive increase debt and foist private sector responsibilities onto the sovereign.

The introduction of quantitative easing which primarily benefitted asset holders over savers contributed to inequality and stagnant standards of living for millions of people. The trend of insurgency against the status quo is not an issue isolated to Europe, but the strictures of the Eurozone, which does not allow countries the pressure release valve of currency depreciation, is where it is coming to a head first.

I agree with Soros that the only way Europe can resolve its issues is to reform, become more democratic, pool liabilities, introduce federal taxation, solve the economic migrant issue and harmonise entitlements. However, we might as well be talking about how many angels fit on the head of a pin. In this environment there is no evidence of the kind of clear vision and ambition for cohesion that would make these outcomes even remotely likely. 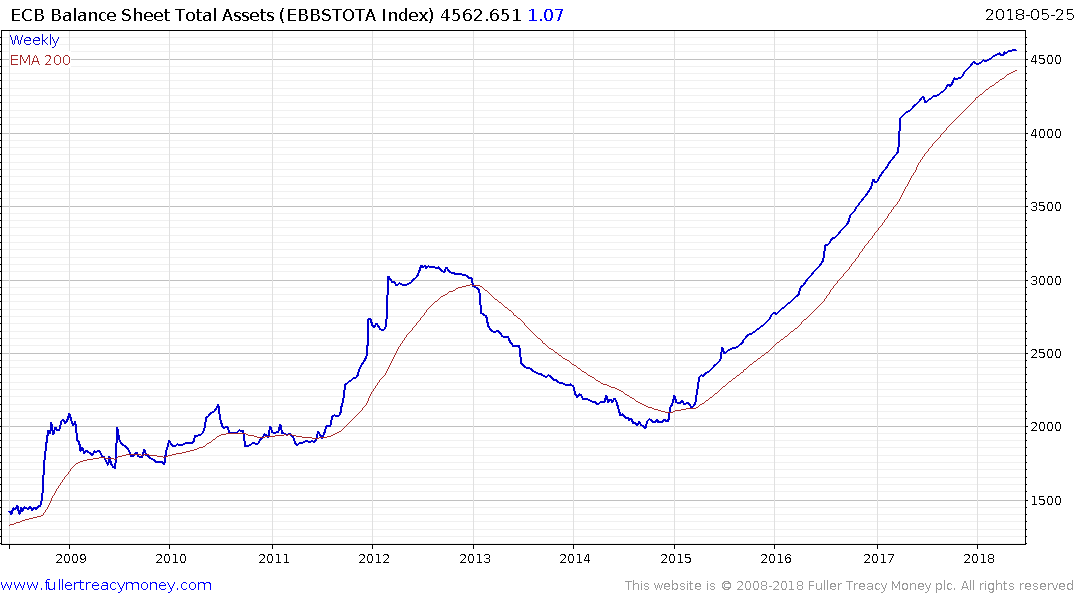 The conventional response employed by central banks since at least 1987 is to flood the market with liquidity. The ECB’s plans to stop adding new liquidity as early as September now appear progressively less likely. There was evidence yesterday of action to suppress Portuguese yields, suggesting the central bank is still actively engaged in the market but it is going to have to require the newly enraged populists to deal on the European Commission’s terms to kick start ECB buying Italian debt again.