How to read Turkey's election results
Comment of the Day

How to read Turkey's election results by Eoin Treacy

This weekend’s vote was, in short, a surprise. Contrary to predictions, Erdoğan won decisively, and his new presidential system has received a seal of approval from the electorate. However, the AKP’s failure to secure an absolute majority in parliament is an important message for Erdoğan. It remains to be seen whether Erdoğan will take this as an opportunity to address the long list of challenges facing Turkey and reconstruct its democracy and economy, and regain the respect that he once enjoyed internationally. The March 2019 municipal elections will be the next test of his performance.

The strength of a nation’s public institutions is what separates failed states from those that can evolve and weather a period of economic peril. Erdogan is an aspiring despot who wants to rule for life. The fact that Turks approved of his presidency but did not give his party an absolute majority suggests they favour limitations on presidential power which is in keeping with any democratic country’s constitution. 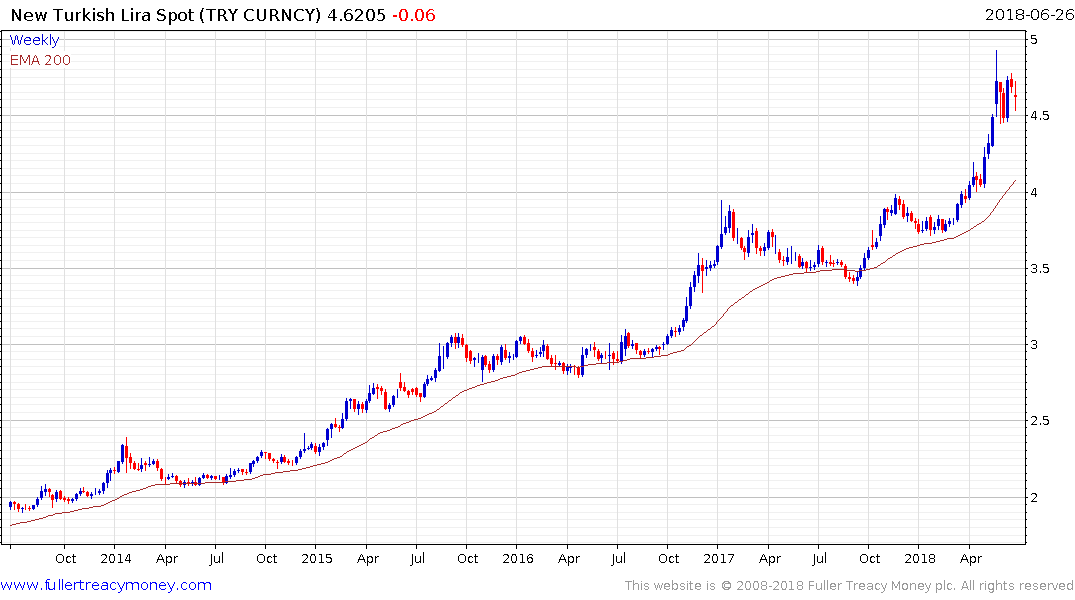 The Lira bounced from the TRY5 area at the end of may following central intervention to support it. It has so far held the lows and Mark Mobius was quoted today saying it is a buy. However, if we address the consistency of the Dollar’s advance we are presented with a consistent trend which is currently prone to mean reversion. A sustained move below the trend mean, currently near TRY4 would be required to question medium-term Dollar dominance. 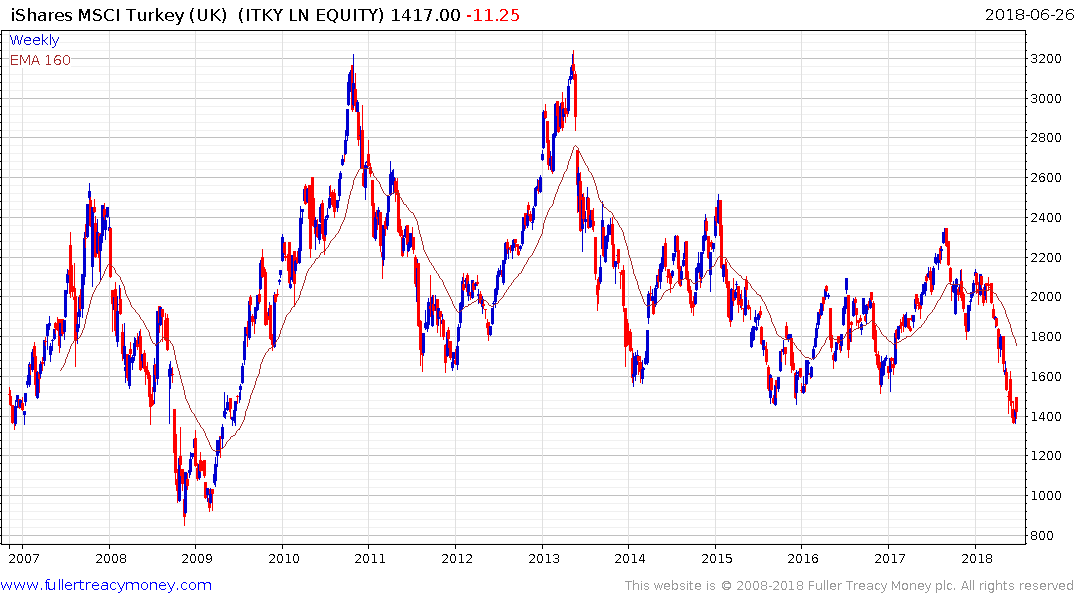 The iShares MSCI Turkey ETF is still trading below the psychological 1500p level and a sustained move back above that level would be required to signal a failed downside break. 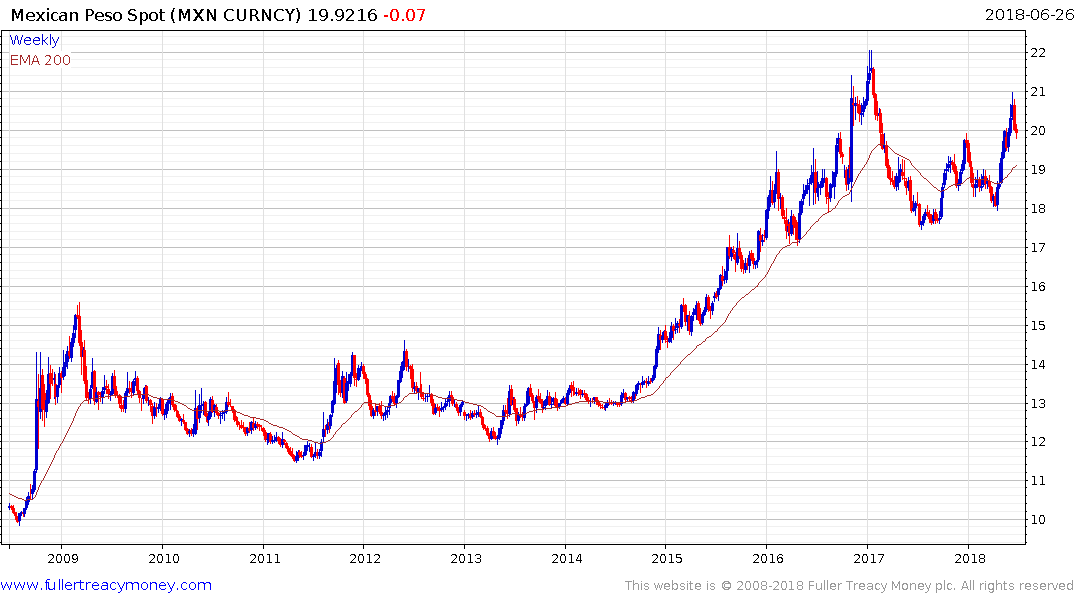 Mexico has an election this coming weekend where there is scope for a left-wing populist to take control. The Mexican Peso has been rallying from its lows on consecutive days following the central bank raising overnight rates to 7.75%, up from 3% at the beginning of 2016. The consistency of the downtrend since 2013 has been broken but the big question now is whether the rally can persist long enough to sustain a move above the trend mean. 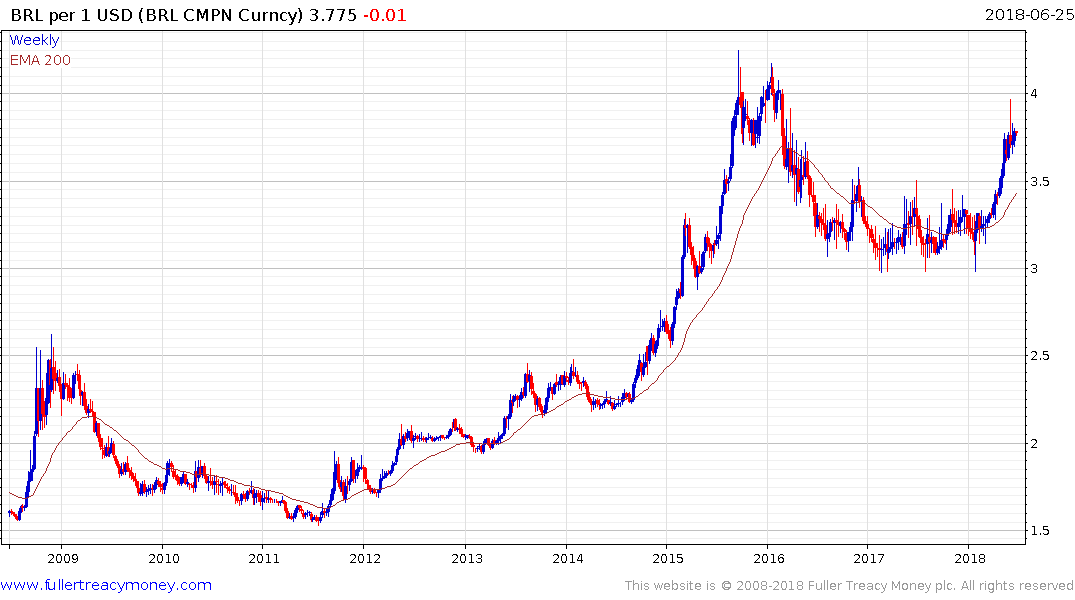 The Brazilian Real steadied from near BRL4 to the Dollar earlier this month following the central banks announcement that it is willing to pursue a currency swap regimen. However, the overnight Selic rate is at 6.4% and investors may be willing to test the central bank’s mettle in supporting the BRL4 level by at least demanding an interest rate hike. That prospect is likely to be problematic considering the condition of the economy where growth is slowing.

A Brazilian émigré I was speaking with yesterday told me her family and friends back home in Sao Paolo are not taking days off when the national team is playing in the World Cup because they are worried about the health of their businesses. That’s a pretty dire indictment of the economic situation in such a football obsessed country and is occurring at a time when a military coup would be welcomed by a growing number of people. 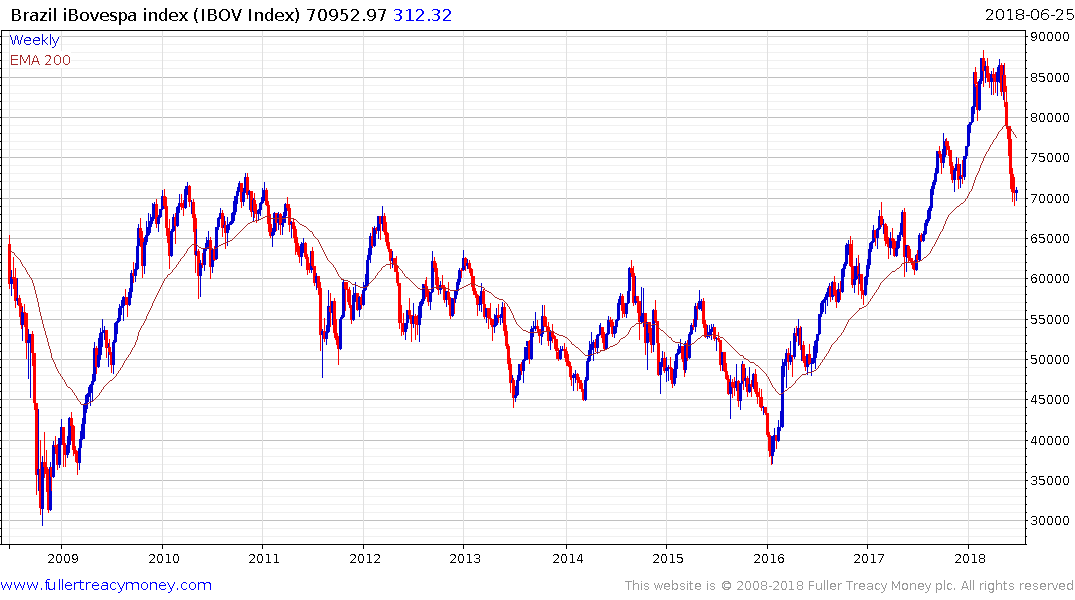 The iBovespa Index has experienced a massive reaction against its prevailing trend which is a completing Type-2 top formation characteristic. While some steadying is likely, a sustained move back above the trend mean would be required to begin to signal a return to demand dominance.