How Citi Stumbled in Mexico
Comment of the Day

How Citi Stumbled in Mexico by Eoin Treacy

The loss is a blow to Mr. Corbat in a year already marred by the Federal Reserve's rejection of the bank's plan to return capital to shareholders, a decision the Fed said it made in part because Citigroup lacked proper procedures to gauge risk at its international operations. A Fed spokesman declined to comment. ​ Citigroup is continuing to review controls in Mexico and is "strengthening any area we think falls short of our global standards and best practices," Mr. Corbat wrote in the Wednesday memo. He said the bank is sharing information with regulators and law-enforcement agencies. The Justice Department, the Securities and Exchange Commission and Mexico's National Banking and Securities Commission are looking into the matter.

Citigroup is a global bank in the true sense of the word and as a result has risks that competitors focused on the domestic market do not have. Its issues with investing in what is ultimately a failed endeavour highlights just how difficult it is to oversee operations in another country, far removed from the company’s HQ.

Citigroup shares doubled between mid-2012 and mid-2013 as it rallied to retest the upper side of its five-year base. It then lost momentum and has been ranging below the 200-day MA since January. A sustained move back above the 200-day MA would be required to signal a return to demand dominance beyond the short term.

If Citigroup’s recent travails were an isolated incident one might conclude that the debacle with Banamex’s lending practices and the Fed’s refusal to allow a dividend increase are to blame. However, a more widespread pattern of underperformance is evident in the sector. JP Morgan is trading below the 200-day MA for the first time in more than a year. Goldman Sachs is in a similar situation. 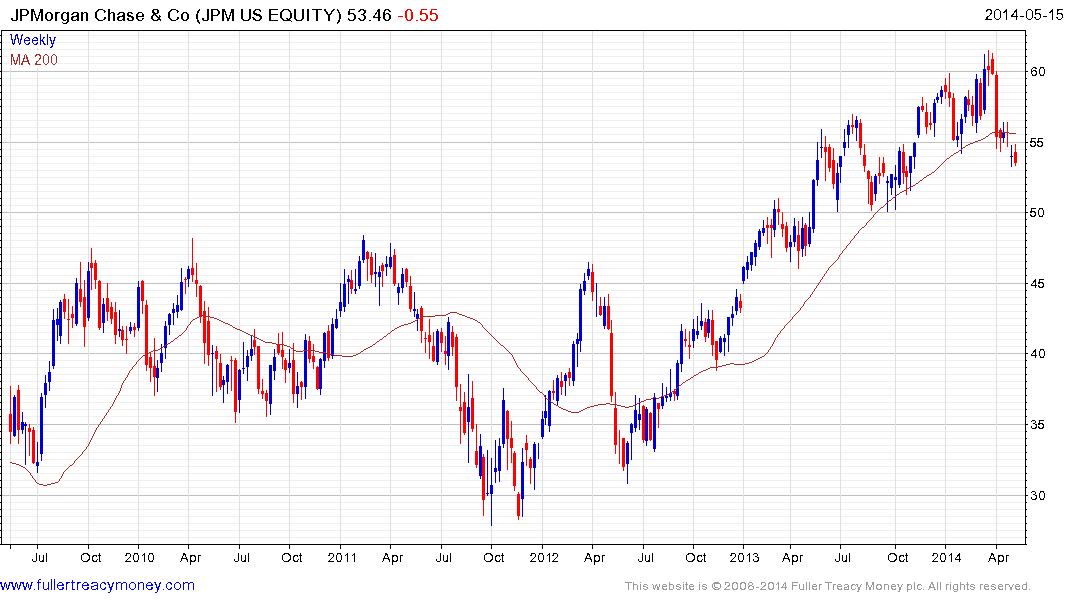 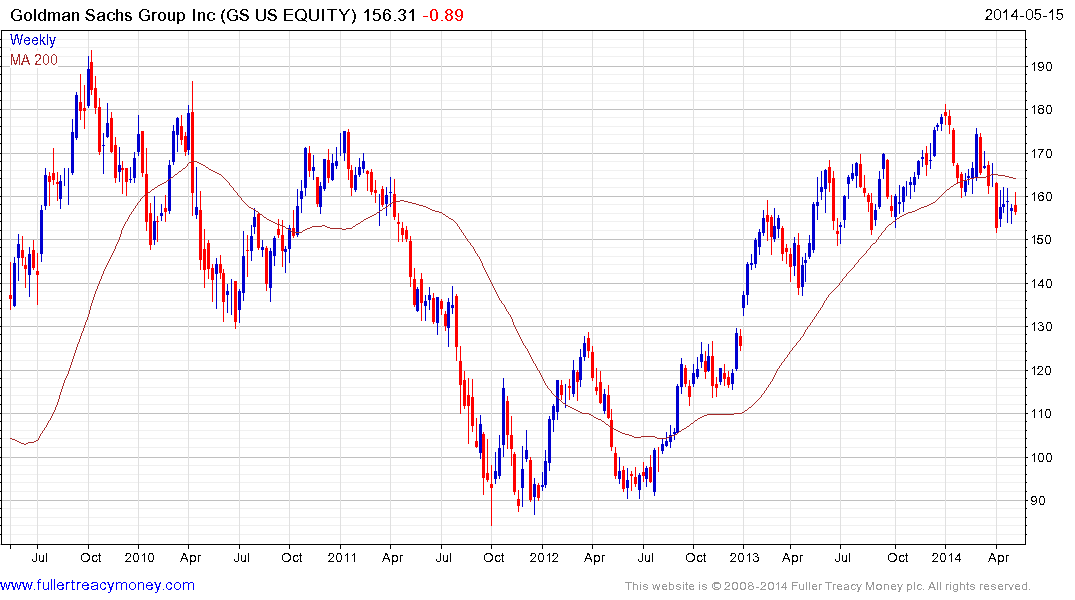 The S&P 500 Banks Index dropped to test the region of the 200-day MA today. From the 2011 lows, every time the Index has tested the trend mean, it has found support and rallied. It will need to rally in a similar fashion on this occasion in order to signal return of demand dominance. 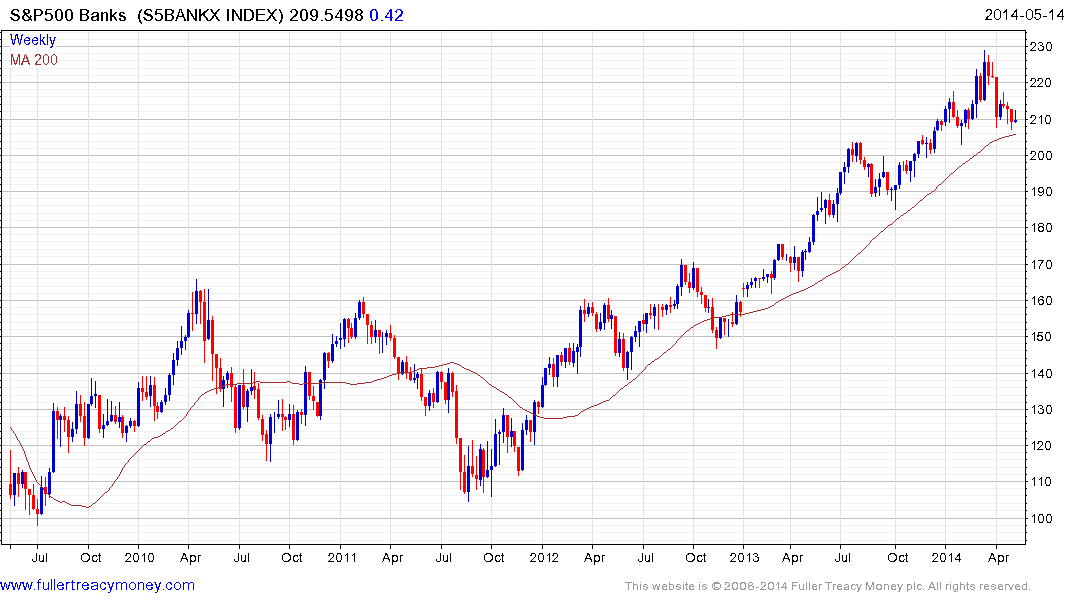 The KBW Regional Banks Index, which has led the recovery in the banking sector generally, has fallen below its trend mean for the first time since completing its base in early 2013. 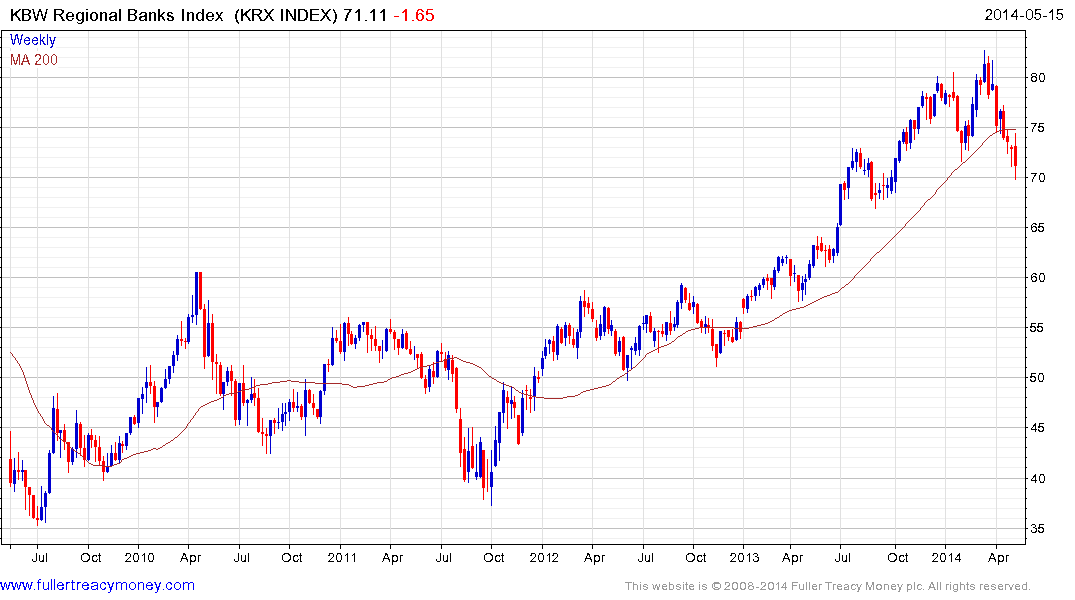 The above charts demonstrate that the banking sector is not taking part in the recent moves to new highs by major indices such as the Dow Jones Industrials and S&P 500. As liquidity providers, banks generally do well when liquidity is abundant and credit conditions easy. At least in part as a result, they are often lead indicators for the wider market, often by a number of months. 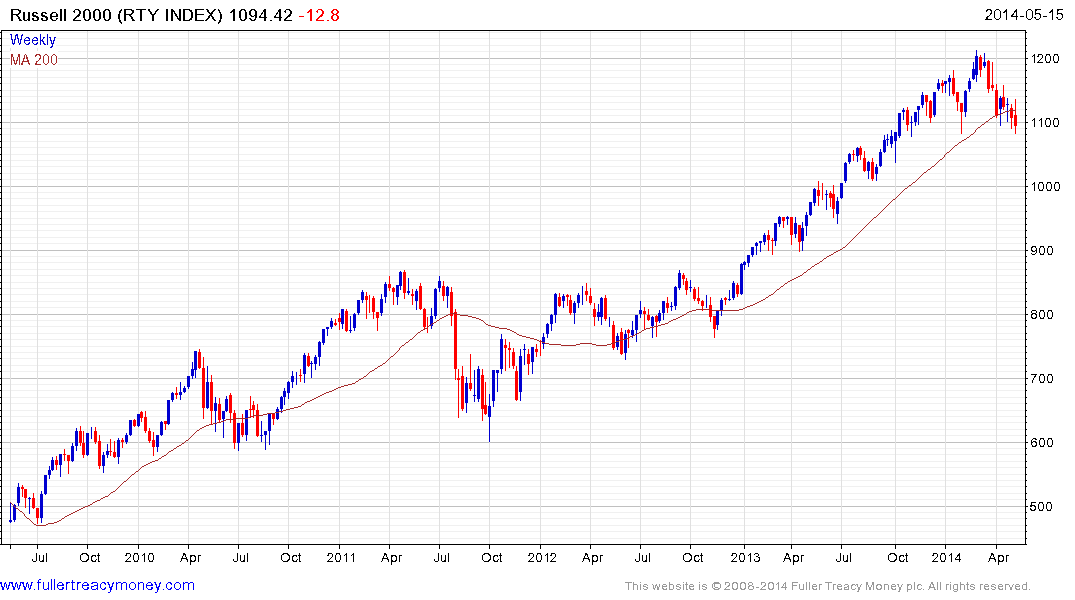 Small caps are also sensitive to the credit cycle, since they often fund growth with borrowed money. The Russell 2000 has held a progression of lower rally highs since early March and extended the decline today. A sustained move above 1140 is the minimum required to check potential for additional weakness.