The pharmaceutical supply chain in the US is convoluted, filled with middlemen and confusing business models. For example, more than three entities are involved in bringing a drug from manufacturer to patient, and each party takes a percentage of 2 the profit along the way.

Amazon has the opportunity to simplify the supply chain and improve the experience/cost matters for patients, payers, and manufacturers. The company has made significant headway into the pharmaceutical distribution space with its ~$1B acquisition of mail-order pharmacy PillPack. With this purchase, Amazon gained a $100M revenue runrate business, a built-out pharmacy supply, and pharmacy licenses in all 50 states.

PillPack is a good fit for Amazon. The company is loved by its customers, claiming an NPS score of 80 compared to the pharmacy average of 26. Customer demand also helped the company re-establish its partnership with pharmacy benefits giant Express Scripts after a public falling out.

Amazon’s march through previously ringfenced sectors remains a powerful disruptive influence that has the potential to streamline supply chains and deliver better value to end customers. At the same time this is going to represent a significant challenge for the middlemen that characterise the healthcare, commercial and industrial sectors today. 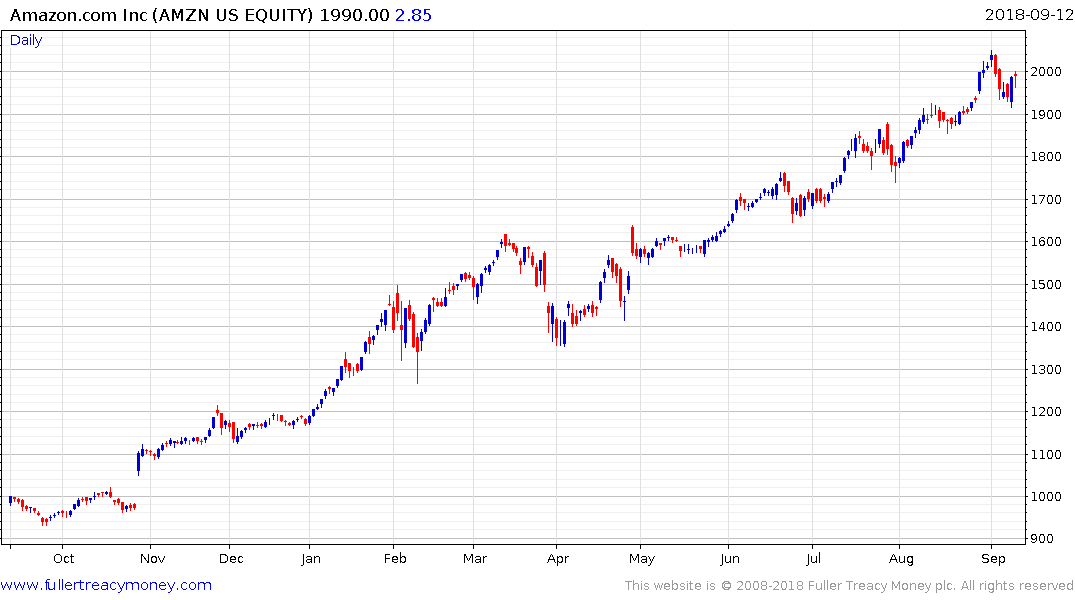 Amazon’s share price continues to trend higher in an orderly manner with a succession of small ranges one above another since April. At some stage the wide overextension relative to the trend mean will be unwound with one of the shares characteristic large pullbacks but not before that short-term sequence of higher reaction lows is broken. 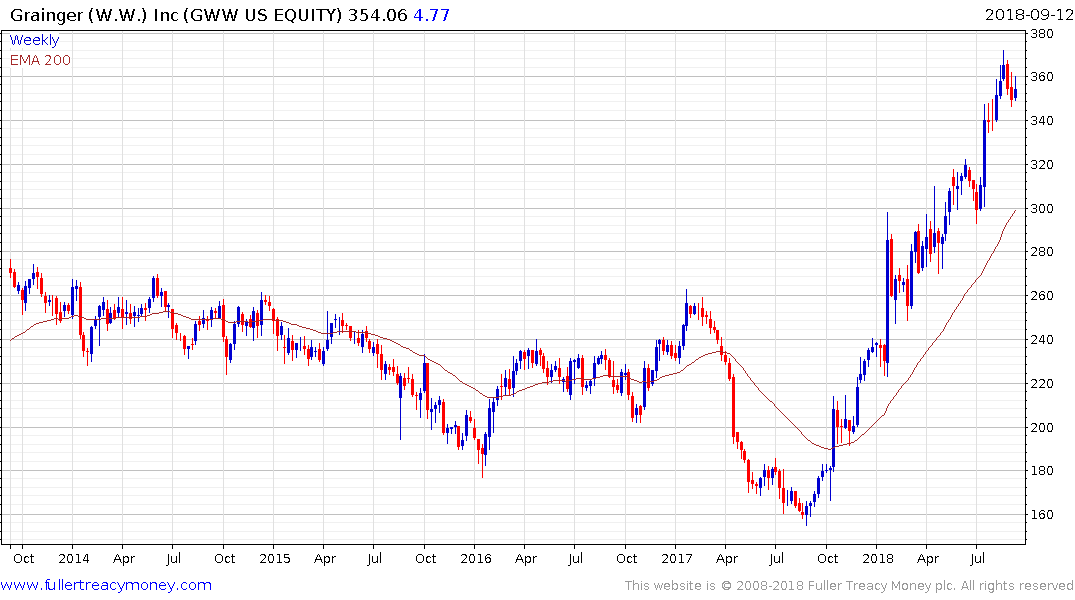 WW Grainger is one of the largest suppliers of supplies to the industrial, commercial and contractor sector. The share has marched steadily higher since the tax cuts were announced and continues to hold a progression of the higher reaction lows. 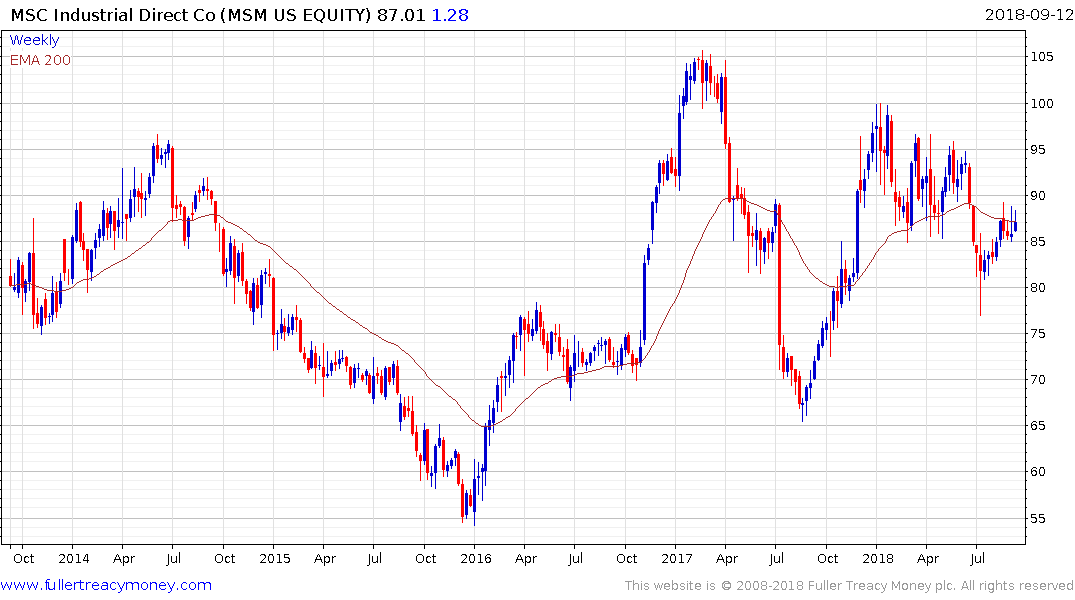 MSC Industrial Direct has formed a large triangular pattern over the last 18 months suggesting a breakout, when it comes is likely to be powerful but with the most recent dynamic being downwards caution is likely warranted. 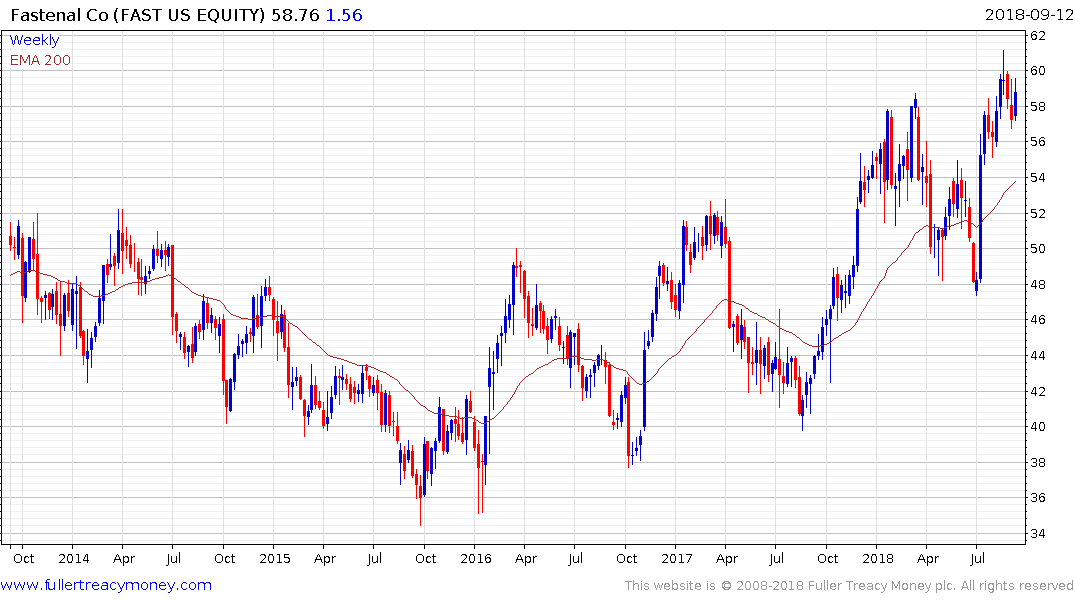 Fastenal ranged for five years until the tax cuts were announced and they broke out to new highs. It is currently firming below $60 and a sustained move below the trend mean would be required to question medium-term scope for continued upside.