Pro-democracy candidates won 86% seats of the 444 seats counted as of 9 a.m., official results showed, with eight seats still up for grabs. In the last election in 2015, they had won about a quarter of all seats. The pro-government camp won about 12% of seats this time around, versus 65% four years ago. The vote saw record turnout of 71%, with more than 2.94 million people casting ballots -- roughly double the number in the previous election.

The vote came at a time of unprecedented political polarization in the city, with divisions hardening as the protests become more disruptive and the government refuses to compromise. While the district councils are considered the lowest rung of Hong Kong’s government, the results will add pressure on the government to meet demands including an independent inquiry into police abuses and the ability to nominate and elect the city’s leader, including one who would stand up to Beijing.

“The government respects the results of this election,” Chief Executive Carrie Lam said in a statement on Monday. “I am aware there’s lots of analysis about the results among the community, which said the results are a reflection of the public’s dissatisfaction towards the current situation and deep-seated problems in society. The government will listen to the public’s feedback with humility and reflect on it.”

The success of pro-democracy candidates in the Hong Kong election puts to rest any argument the protests were not widely supported by the community. The challenge for protestors now is the absence of any real power for those elected.

Elections offer a pressure release valve for protest movements because people believe they can achieve change through the democratic process. When that fails, they feel compelled to resort to more extreme actions. The challenge China now has is how can they do enough to placate the protestors, while also ensuring they retain a stern grip on power. That’s a tall order and there is little evidence of willingness to compromise.

The leaking over the weekend of the algorithm China uses for predicative policing in Xinjiang is also noteworthy. It is not only supportive of the first-person accounts, which have emerged from the camps over the last couple of years, but is also a sign of internal conflict within the ruling elite.

These kinds of leaks from China are not a common occurrence and suggest there is more going on under the surface than immediately meets the eye.

An additional point is China actively policies negative commentary online. I noticed shortly after reading the International Consortium of Investigative Journalists article that the link no longer worked. It took a couple of hours for them to correct the issue. For anyone interest it is advisable when researching China to save everything offline because critical stories seldom remain online for long. 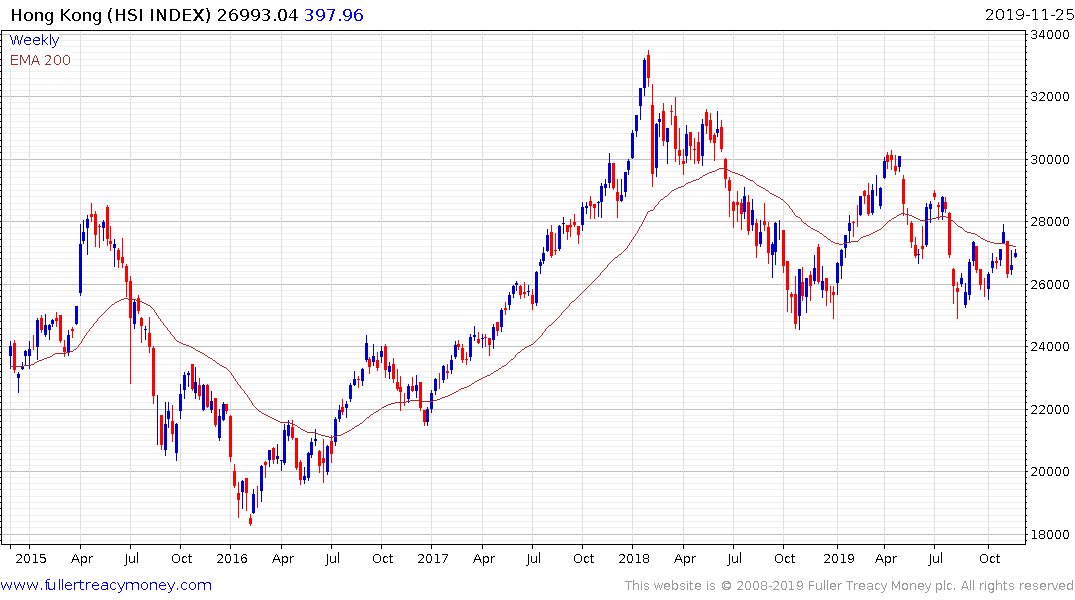 The Hang Seng bounced today to hold its sequence of higher reaction lows and will need to continue to hold the 25,000 level if the benefit of the doubt it to continue to be given to potential for higher to lateral ranging.