Hoisington Quarterly Review and Outlook
Comment of the Day

Before the pandemic, economic growth was decelerating as confirmed by a decline in world trade in 2019, one of the few yearly declines in the history of this series. While the huge debt financed programs were a response to the pandemic, the end result is that global nonfinancial debt increased to a record 282% of GDP in 2020. The 37% surge of debt relative to GDP was also a record. While this debt may be politically popular and socially necessary, it will weaken growth and inflation after a transitory spurt, which will lead to even more disappointing business conditions than existed prior to the pandemic.

The actual global debt situation may be worse than these numbers indicate because they include China, the world’s second largest economy. Scholarly forensic research indicates that Chinese GDP is overstated by at least 18%. Thus, the official Chinese debt to GDP ratio is suppressing the global numbers. A comparative analysis of money velocity confirms the suspicion about the Chinese figures. Money velocity in China in 2020 was 0.44 versus 1.19 in the U.S. Admittedly money and debt are not identical, but they are opposite sides of the balance sheet and the glaring gap is too much to be ignored.

Something that has been troubling me for a while is why has China chosen now as the time to clamp down on Alibaba and Ant Financial’s massive money market fund. The rationale that it was politically motivated and that the firm has become too big and powerful for the comfort of the Communist Party is tempting and probably holds some truth. However, the bigger question is whether the financial system needs to reabsorb the flows and be refortified because the debt overhang is much larger than investors are willing to give credence to?

China’s growth has been sustained through debt expansion for more than a decade. In that time the creation of a services economy has helped to improve productivity. That has helped to blunt the impact of rising debt on growth, but the longer it goes on for the greater the challenge to sustaining productivity growth. Costs are rising across the board in China and the bet is the global supply chain snarls that are boosting commodity and shipping prices are temporary. That’s certainly the view of central banks. The challenge is that “transitory” could last a year or two and the potential passage of the Biden administrations massive spending packages is likely to have a significant bearing on perceptions of inflation. 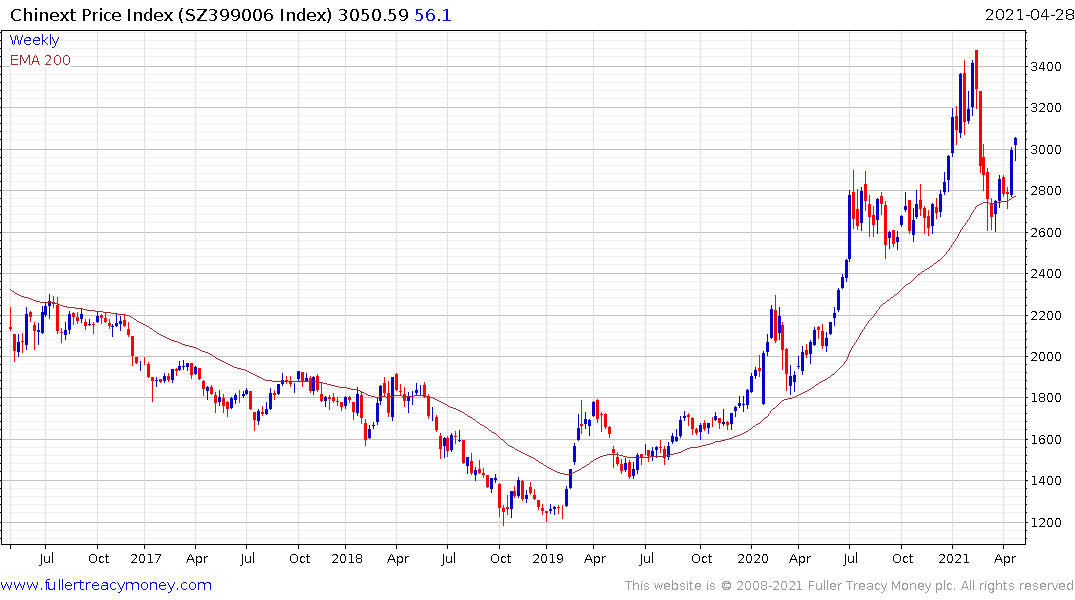 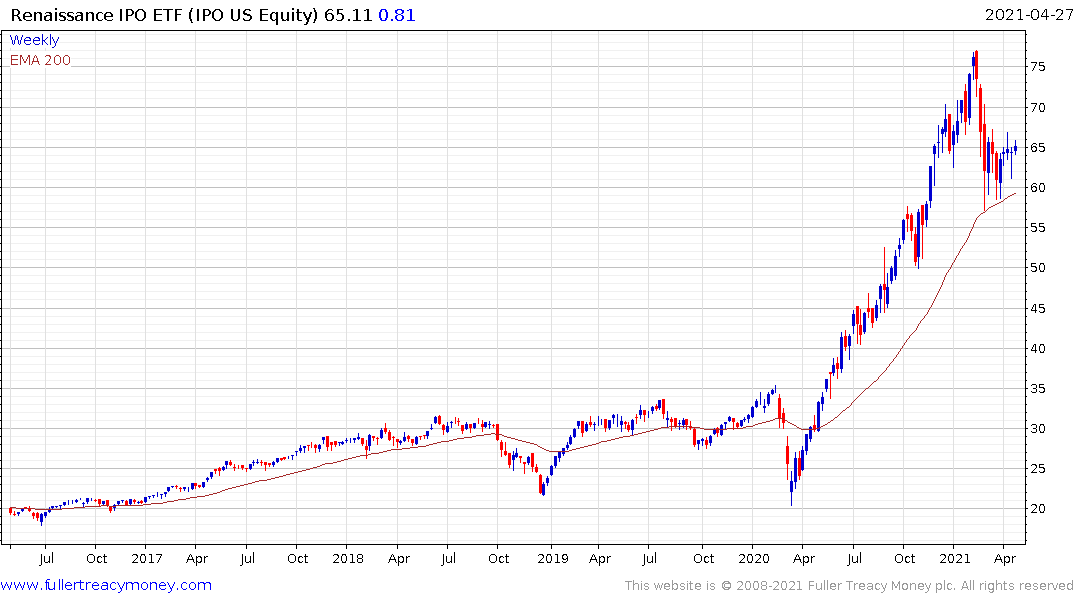 China’s growth oriented ChiNext Index has rebounded in line with the US IPO ETF over the last week. That suggests the global theme of investing in speculative growth is still intact as the big central banks (Fed, ECB, BoJ, BoC, BoE and SNB) remain reluctant to raise rates or significantly reduce stimulus. 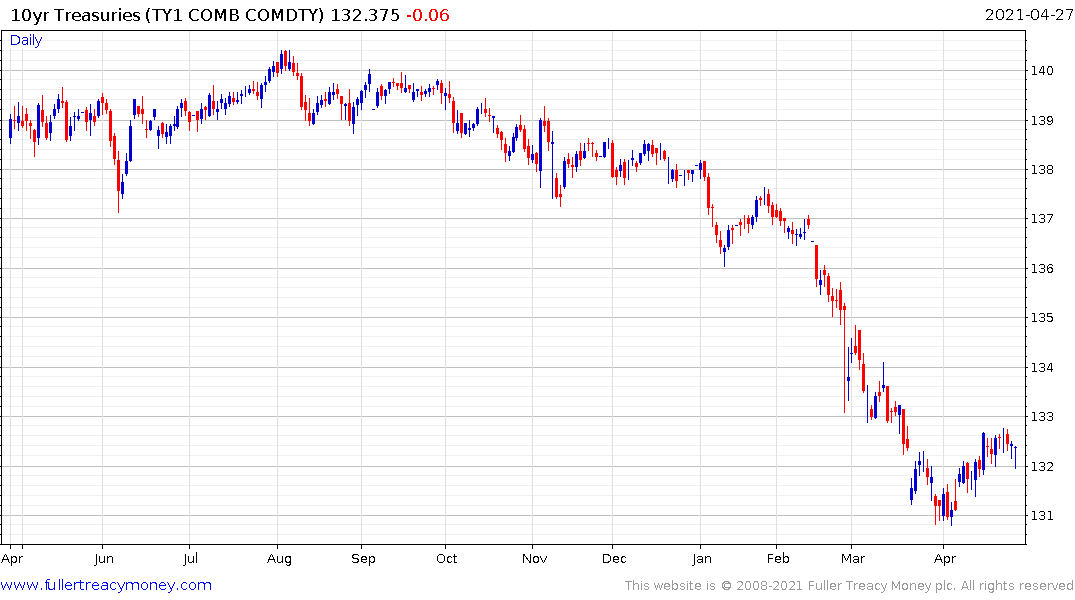 Treasury prices continue to hold the 132 area and may be putting in a higher reaction low. In a secular bull market bulls are conditioned to buy the dip. There has certainly been a dip and the central bank is saying in plain English they do not expect inflationary pressures to persist indefinitely. That suggests there is still scope for a further reversionary rally but I’d be a lot more comfortable with my long position if today’s low holds. 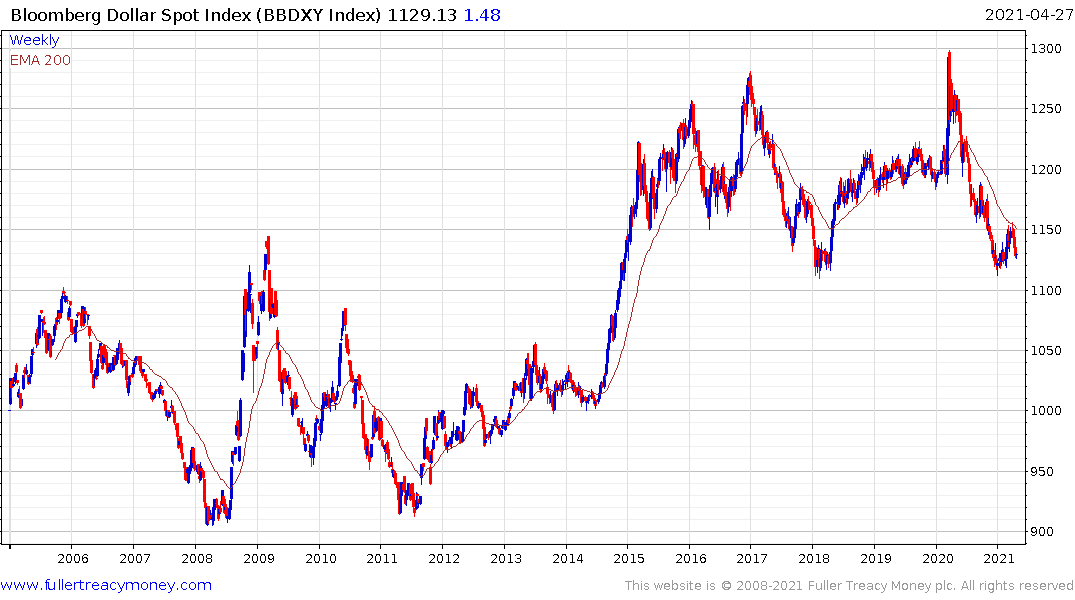 The Bloomberg Dollar Index continues to trade back down towards the January through late February lows. This longer-term chart pattern has Type-3 top formation characteristics which suggests the Dollar has a long way to fall from here. More than any other factor, the potential for significant Dollar weakness represents the biggest catalyst for Fed actions to support Treasury prices. The last thing the US government needs is spiking yields as spending ramps up.