Hog Disease in Germany Means a Boost for Battered U.S. Farmers
Comment of the Day

The U.S. hog market had crashed in March, first as restaurants in the U.S. closed to slow the spread of the coronavirus and then as workers at meat plants started catching Covid-19. Absent employees and companies taking safety precautions forced pork plants to shut down, resulting in a nearly 40% reduction in output of the meat by early May.

Hog farmers left without a market euthanized animals and adjusted feed rations to slow the rate of weight gain in herds. While there is no official count of how many hogs were culled, CoBank estimated as many as 7 million. Now, months after plants reopened, pork plants were bidding up prices to buy hogs from farmers, even before the news out of Germany.

“We had all of that liquidation taking place and no one ever quantified that,” Dan Norcini, independent hog trader in Idaho, said by phone. “I’m starting to wonder if the impact of the liquidation is being felt and then the German news came, and it was like a one-two punch.”

2020 will probably be remembered as a year of plagues. Early this year there was the plague of locusts making its way across northeast Africa, India and China. Then we had the swine flu which ravaged herds in China, Next, the COVID-19 pandemic closed down the global economy for the first time ever. Fires have also been making headlines in Australia, Brazil and more recently in the USA. This year has lumped a decade’s worth of volatility inducing events into only a few months so it is reasonable to question whether this volatility will lead to short or long-term trend changes. 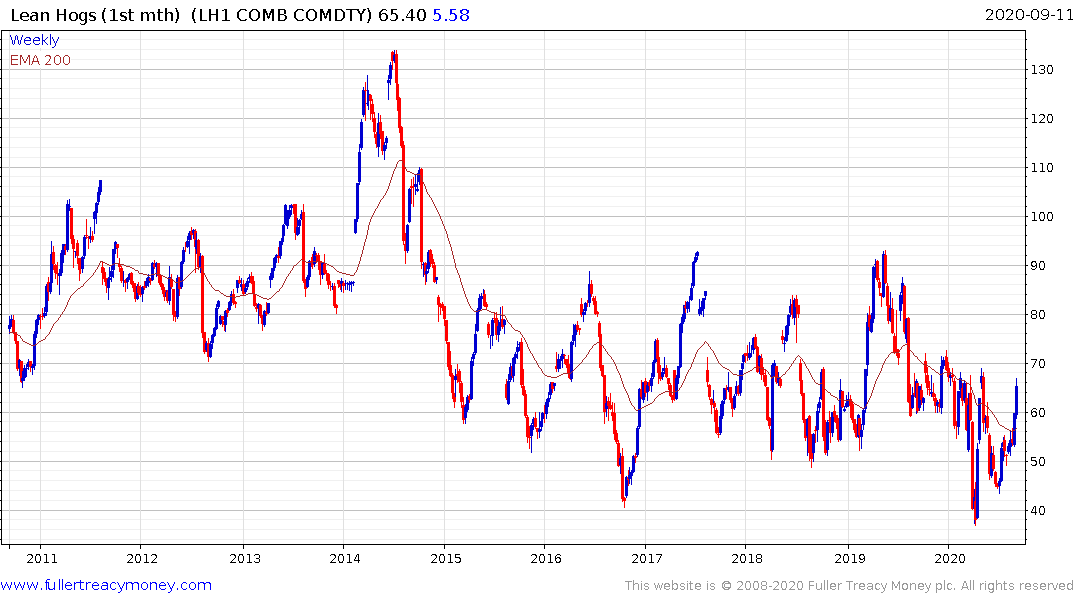 Lean Hogs continues to trade in contango suggesting no near-term supply shortage. The price has been confined to range since collapsing in 2014 and it is currently rallying from the lower side. A sustained move above $80 would be required to signal a return to medium-term demand dominance. 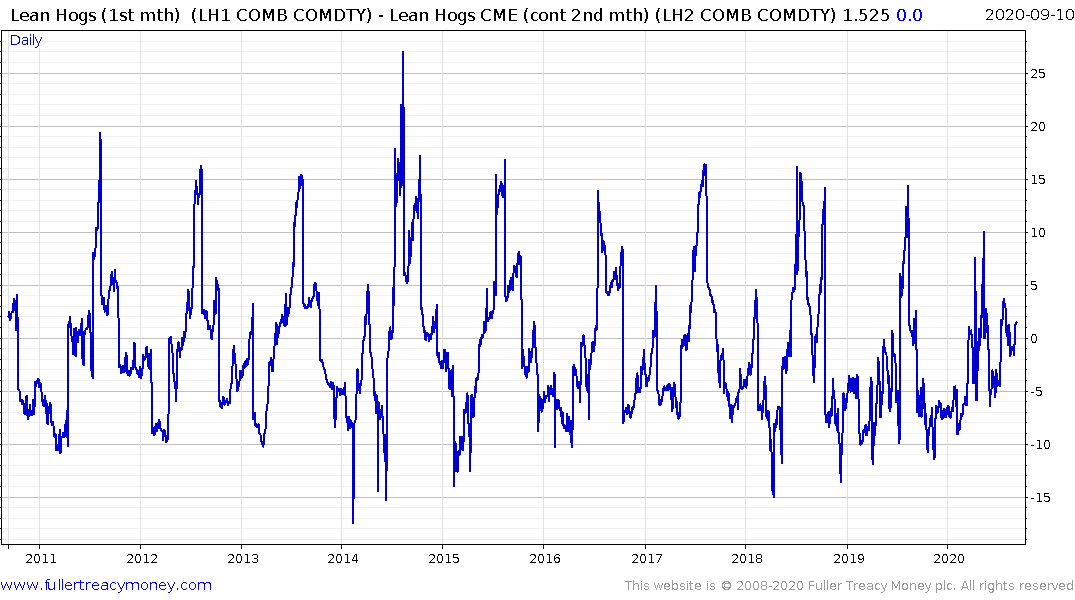 The one clear change is the seasonality of the market has been impacted. Historically, the swing from backwardation into contango following a clear pattern dictated by the slaughter schedule. Over the last two years that relationship has become a lot more volatile. 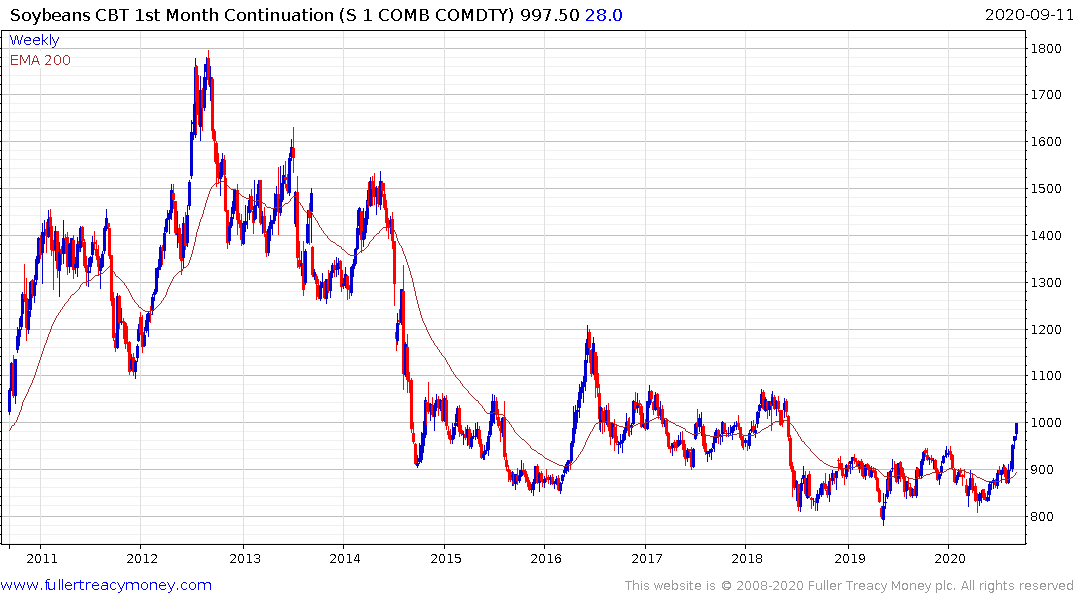 Soybean broke out this week to new two-year highs. It is now closing in on the psychological 1000₵ level. A sustained move above it would confirm a return to medium-term demand dominance. 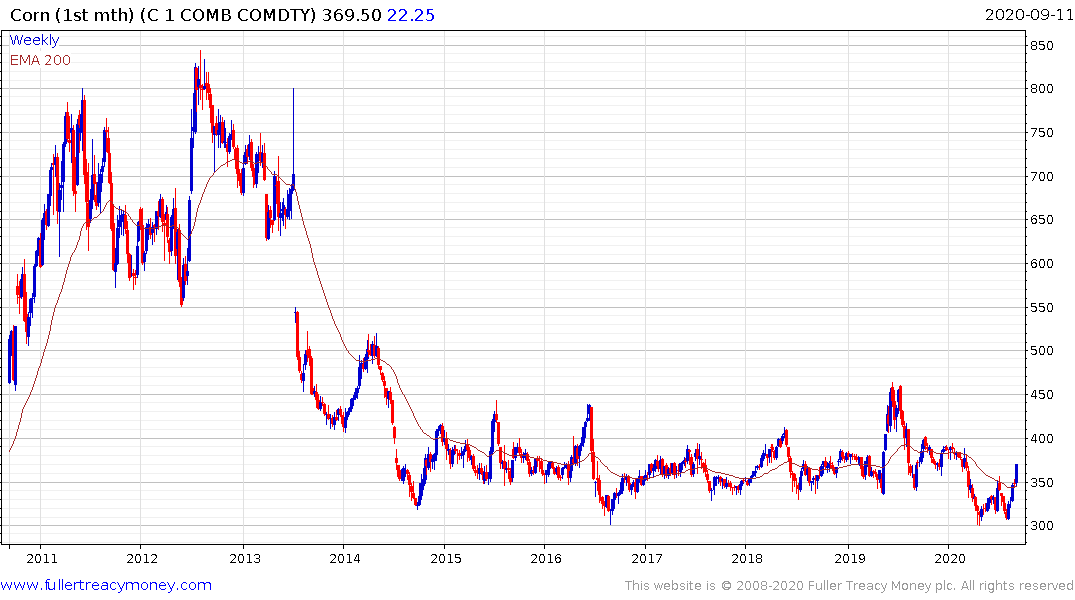 Corn is also rebounding. A sustained move above 400₵ would confirm a return to medium-term demand dominance. 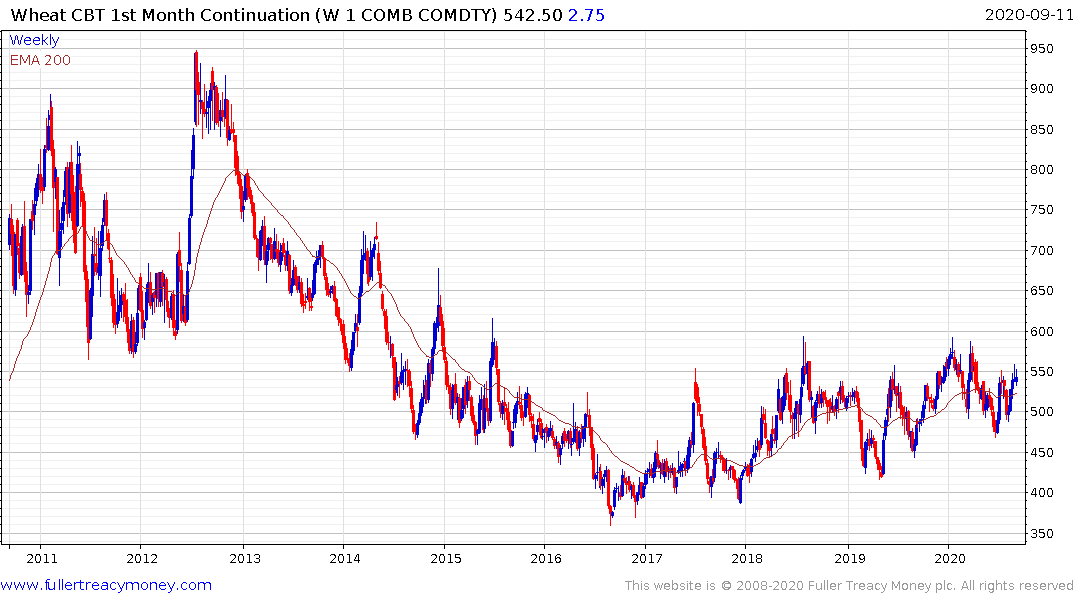 Wheat also has base formation characteristics but a sustained move above 600₵ will be required to complete it. 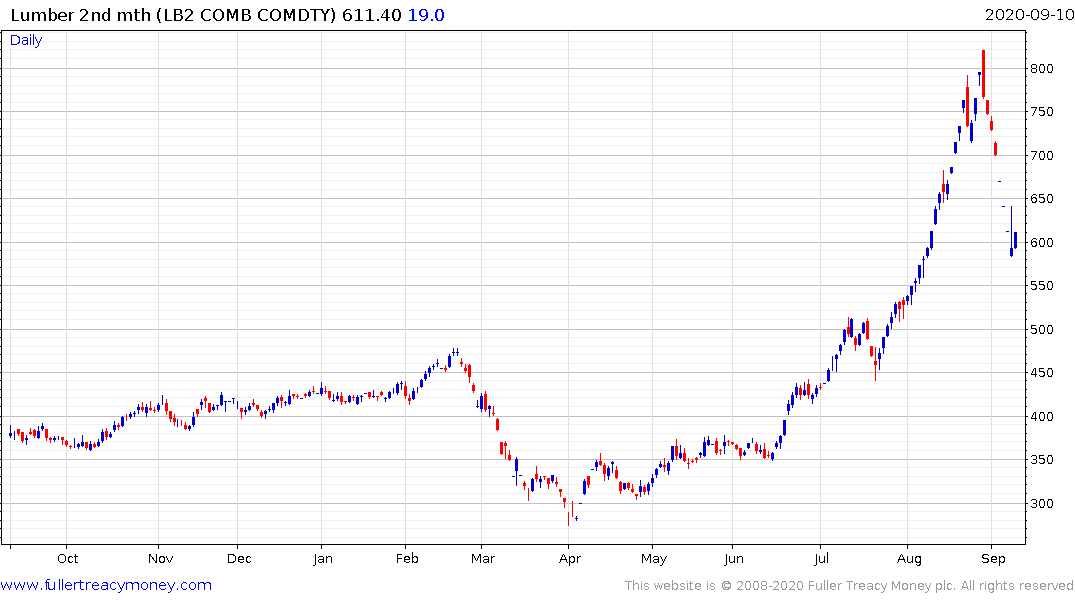 Lumber prices have been extraordinarily volatile. The price opened limit down three days in a row until Wednesday and opened limit up today. This kind of price action is symptomatic of very illiquid trading but when that occurs close to historic highs it is also reflecting a great deal of highly leveraged speculation.

It would be tempting to think this is reflective of a massive jump in housing starts, or a lack of supply because of fires. However, it is probably a move in anticipation of these events rather than a response to them.

Aside from natural disaster supply and demand interruptions it is also worth remembering that commodities are among the first assets to respond to inflationary pressures. Precious metals have already completed base formations and industrial metals have broken two-year downtrends. There is potential that the various disruptions caused by this year’s natural disasters coupled with the massive monetary and fiscal responses to deal with them have seeded a new inflationary cycle.

This is the most important question in the global market today. The answer will hinge on the willingness of central banks to run economies hot when recoveries are firmly established.