This chart is one of my favorites that I’ve made in a while, as not only does it contain a lot of interesting information but I also learned a lot by making it. Here are a few of the most important takeaways:

1. At high interest rates the coupon is most important, and at low rates capital appreciation is king

2. Short and intermediate term bonds (typically capped at about 10 years) are much less sensitive to interest rates at all levels than long term bonds

This is one of the more explanatory and informative reports I have seen on the bond markets and helps to explain the continued momentum driven move despite the fact nominal yields are at objectively unattractive levels. However, it is also worth considering that the most compelling arguments for the success of a momentum strategy almost always appear during the acceleration phase of a bull market.

The advent of quantitative easing substituted price appreciation for coupons in the calculation of the total return on bonds. The process of quantitative tightening that prevailed until late last year pointed towards higher interest rates and therefore threw the focus on attention back onto coupons which are low by historical standards. That resulted in the yield pushing back above 3%. The confirmation of the Powell Put re-established the momentum move because investors have concluded we are at the top of the interest rate cycle and additional monetary stimulus is inevitable. 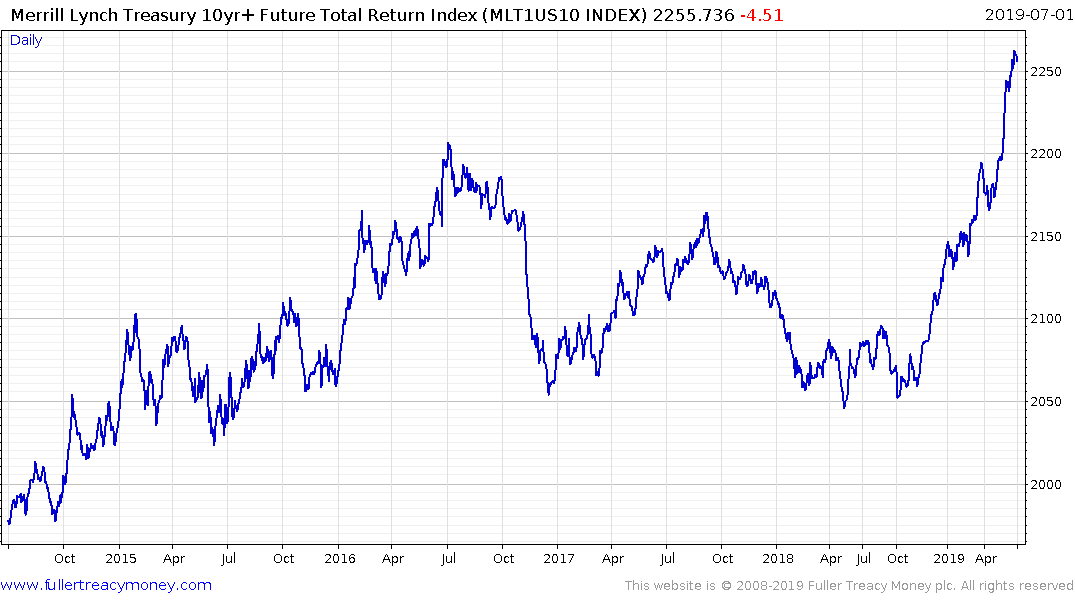 The Merrill Lynch 10yr+ Total Return Index broke out to new highs in the first quarter and the benefit of the doubt can be given to the upside provided it continues to hold the move.

Another way to think about the momentum move in bonds is governments have created markets for their securities by creating the “Tier 1” capital category and mandating that banks and pensions have to hold them. Then we have the fact the economy is highly leveraged to low interest rates and the financial sector is heavily dependent on the momentum move in bonds persisting. That makes it extraordinarily difficult to raise rates.

The fact the Fed has only managed to get to 2.5% while the Eurozone and Japan never got of the launchpad is a testament to that fact. Little wonder then central banks will do anything to extend the economic expansion. They will have no choice but to embark on a hyper aggressive monetisation of the debt market to even support markets during a contraction.

That helps to put gold and bitcoin’s rallies into perspective.