Once the Grand Cayman-based company completes its three- year audit in the next 60 days, it will be able to access capital markets and borrow 2.5 times earnings before interest, taxes, depreciation and amortization, he said today in a Bloomberg Television interview with Stephanie Ruhle.

“We’re catalyst-driven investors, and in this case the catalyst is coming in the next 60 days when they have their three-year audit done,” Bass said, adding that Herbalife is a business that generates “significant” cash flows, has no debt and is growing. Dallas-based Hayman owned about 436,000 Herbalife shares, or 0.4 percent of the stock outstanding, as of Sept. 30, according to data compiled by Bloomberg.

Herbalife has recently been under scrutiny amid allegations by hedge-fund manager Bill Ackman that the company is a pyramid scheme. While Herbalife has consistently denied Ackman’s claims, the activist investor last month said he will take his bet against the company “to the end of the earth.”

Few companies have gained such notoriety as a result of their sales strategy as Herbalife, but regardless of whether one agrees or not, there is no denying that the company makes money.

I listed Herbalife among the original constituents of our Autonomies because while the company is not a mega-cap such as Coca Cola it has other attractive characteristics such as a dominant position in the types of dietary products it produces and its revenues are globally diversified. The fact that it planning to buy back shares has probably acted as a bullish catalyst this week. 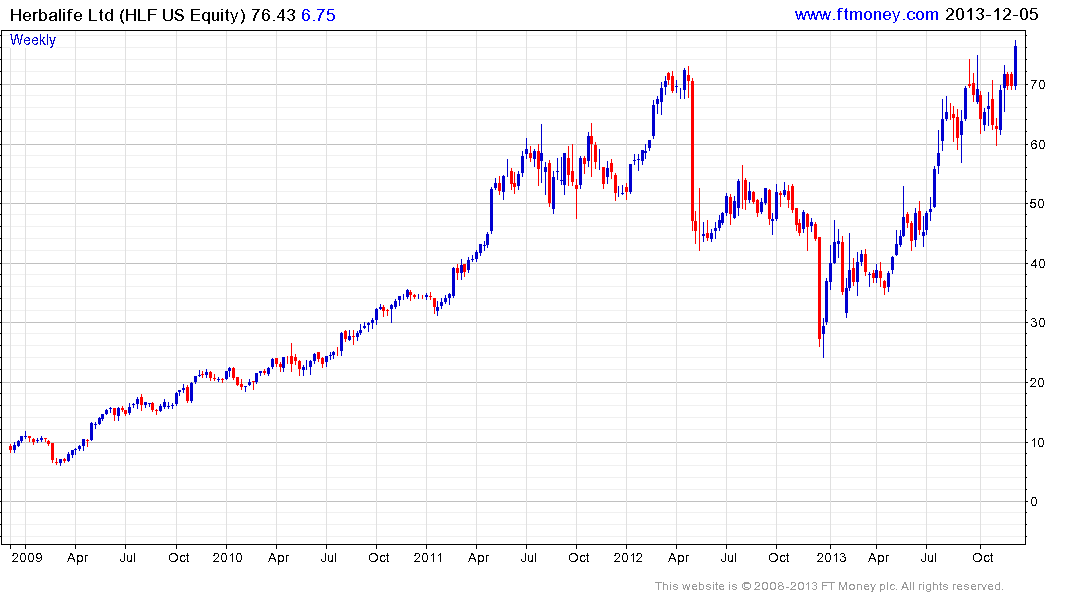 The share recouped its entire decline following the 2012 bear raids before consolidating for much of the last few months. It broke out to new all-time highs this week and a sustained move below $60 would now be required to question medium-term scope for additional upside.