The political backlash that followed crisis-era bank rescues hangs over policy makers’ approach to the current problem, analysts said, even as officials work to ensure the smooth functioning of a key piece of the infrastructure underpinning financial markets. Some fear that lending directly to hedge funds could lead to the perception the Fed is fueling risky bets.

Many hedge funds trade in the cash market through sponsored repos. The clearinghouse sits between buyers and sellers to ensure that neither party backs out of the transaction. Records of cleared trades also are publicly available, improving the market’s transparency.

The idea of using the clearinghouse appeals to some investors and analysts because the Fed has had trouble getting cash into the hands of the smaller banks, securities dealers and investors who need it the most.

That is because the Fed trades exclusively with a small group of large banks and securities firms, known as primary dealers. Even among these firms, activity is tightly concentrated. A study recently published by the Bank for International Settlements said that liquidity in the repo market rests in the hands of the four largest banks in the U.S. system.

Every time a central bank reduces interest rates, holds them down for a prolonged period and increases the size of its balance sheet, part of the rationale is to support the kind of speculative activity which can get the growth multiplier moving again. The side effect is to encourage simultaneous financial market speculative activity in both public and private assets.

The freezing up of the high yield market in late 2018 and the repo market in September 2019 both served to highlight how sensitive the markets are to any whiff of tighter policy. Meanwhile the tight regulation of the banking sector has inhibited their ability to provide liquidity. Therefore, the Fed has had to step in to provide upwards of $400 billion to ensure the smooth operation of the market. The Fed probably didn’t want to take over responsibility for the repo market, since it carries unlimited liability. That is the clearest rationale for why it is investigating other measures to supply liquidity and providing funds directly to hedges funds is one potential answer. It’s far from an ideal situation but it is one possible option.

A point I discussed in last night’s audio was that it was private pools of capital represented by partner-led investment banks who traditionally provided liquidity. They almost all expanded their balance sheets by buying commercial banks in the 1990s. They are now the subject of much tighter regulation which is inhibiting their ability to make markets. The partnerships of today are the more successful hedge funds. The question is how to incentivise them to participate as market makers in the money markets. Apparently free money is the answer. 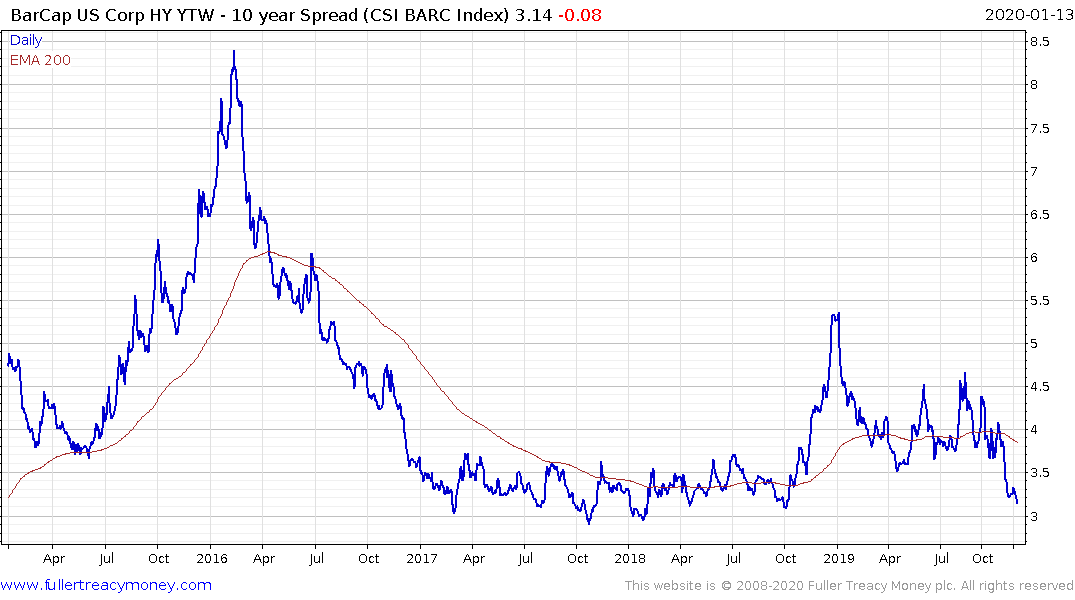 B-rate spreads over Treasuries hit a new 12-year low today. BBB rate spreads are also contracting but not at nearly the same pace as much lower rated bonds. That is supportive of the increasing speculation argument, driven by the belief the Fed will do whatever is necessary to avoid a recession. That change to predicting trouble, rather than responding to it, is a recipe for a bubble.

This roundtable from DoubleLine featuring, Jeff Gundlach, David Rosenberg, Ed Hyman, Danielle DiMartino-Booth, James Bianco and Steve Rosnick covers a number of relevant topics. It highlights a number of the risks outstanding which the Fed is clearly aware of. That helps to inform us on the decision to try and react early to stress rather than react when it is often too late.