Hearts of Glass by Eoin Treacy

God only knows what the historians of the future will make of 2020. A global flu panic that results in countries shutting down entire economies sounds like the pinnacle of craziness – until you discover that Europe between the 15th and 17th centuries was periodically prone to something called the ‘glass delusion’, in which sufferers believed that they were made of glass and at risk of shattering into pieces. The French King Charles VI was one of the higher profile victims of the illness, and he would reportedly wrap himself in blankets to prevent his buttocks from breaking. Because human nature never really changes, we choose to allocate to uncorrelated investment vehicles known as systematic trend-followers, which make no attempt to predict the future, or to avoid seeming overvaluation, but which are simply content to ride such price trends as appear from time to time, both up and down, courtesy of the interests and enthusiasms of the mob.

We also allocate, at present, to precious metals-related companies, provided we can secure robust cash flows in the process from businesses trading on comparatively modest earnings multiples, and with little or no debt. As George Bernard Shaw once remarked,

Those gentlemen in government are primed to issue a vast quantity of debt. And why wouldn’t they? Interest rates are at historic lows and investors seem willing to invest in anything with a promise of a cashflow. The US Treasury is now stretching the maturity of outstanding debt which raises some important questions.

Much of the debt issued over the last few years has been very short dated. That might seem nonsensical to the casual observer when long-dated interest rates are so low. However, short-dated debt is readily available and it gives the impression that the principal will in fact be returned at maturity. It makes perfect sense for the US Treasury to stretch the maturity of the debt it issues. The question investors need to answer is whether it makes sense to buy it at such low yields when the government is spending money like a drunken sailor. 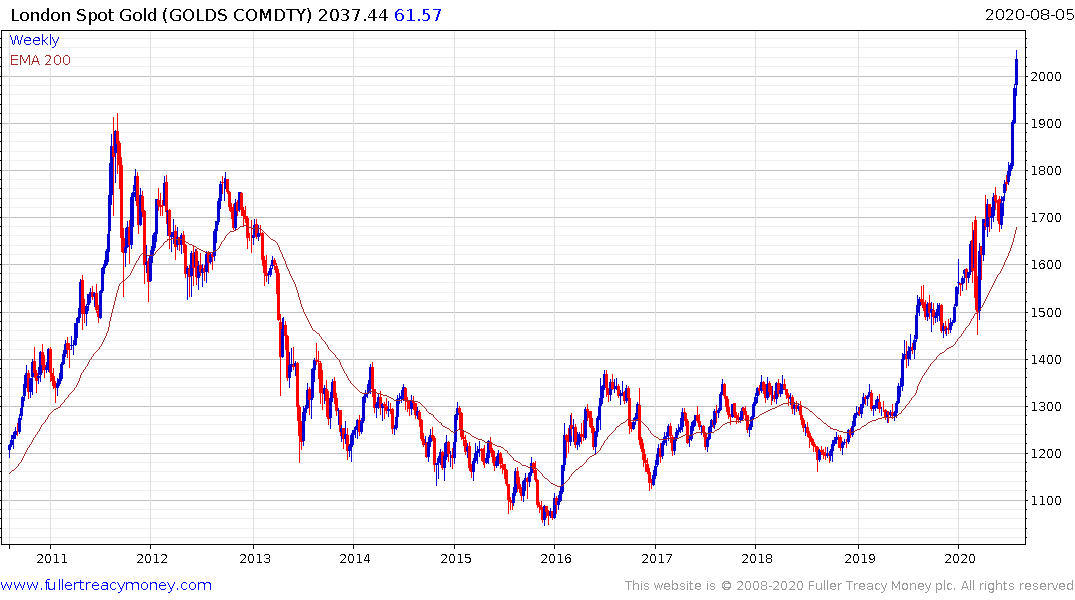 That obviously creates a vibrant market in alternatives like gold. Gold broke out of its base 14 months ago and the pace of the advance is accelerating as it raced through the psychological $2000 level. I was too early when I started buying gold in 2018 and had a sit through a painful setback, before the eventual breakout last year. At the time it was difficult to convince anyone that a new bull market was in the offing.

My chief concern is that in the last week alone I have had four different conversations with money managers who are in the process of either buying gold for the first time or increasing existing positions. I sit on the investment committee for Nevada Trust Company as well as a couple of family offices. Some have been hard value investors for decades but are now willing to consider gold in preference to bonds. The allocation most often mentioned is 5% of a portfolio in gold. That’s well shy of the traditional 10%, but it is a reflection of the growing disaffection with fixed income in a global zero interest rates environment. 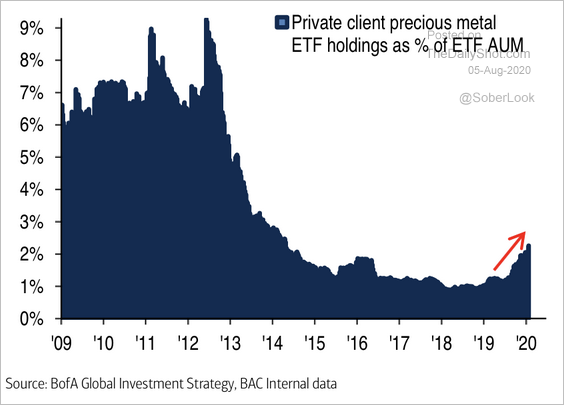 This chart from Bank of America/Merrill Lynch highlights the fact that retail investor interest is only just beginning to break out. When I chatted with Eric Sprott last autumn, he said they had never been busier. That suggests investors may have been going directly to ETFs rather than buying individual shares via broking accounts. 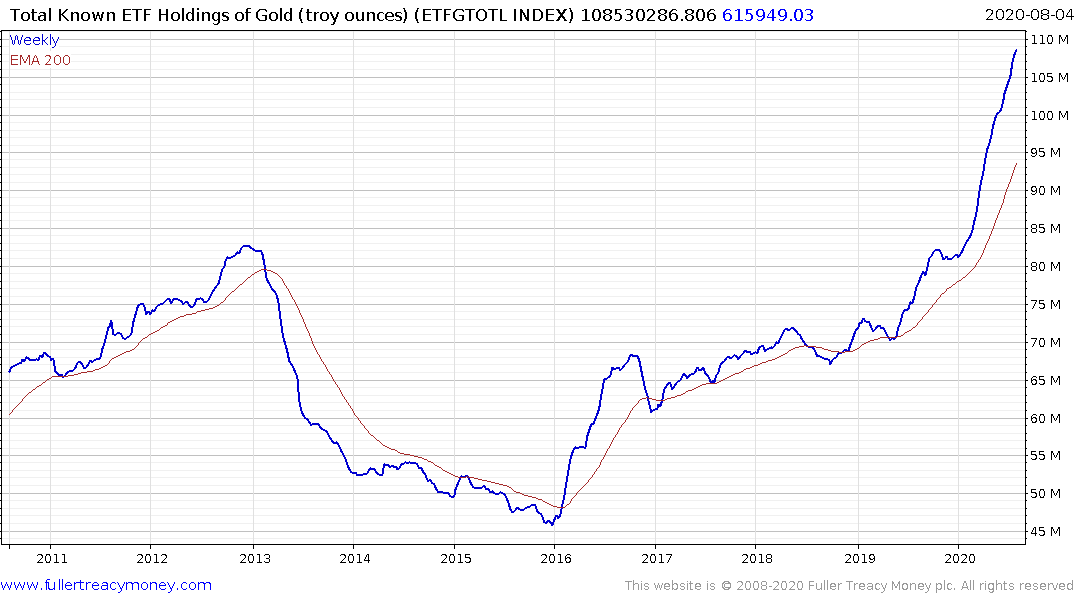 Everything I have learned from trading gold over the last seventeen years is that these brief periods where gold accelerates are following by significant pullbacks and periods of ranging which allow the overbought condition to be unwound. Admittedly we are in a very strange market environment right now, where a number of assets are accelerating at the same time. Nonetheless, the first clear downward dynamic is likely to mark a peak of medium-term significance which will set up the next attractive buying opportunity. 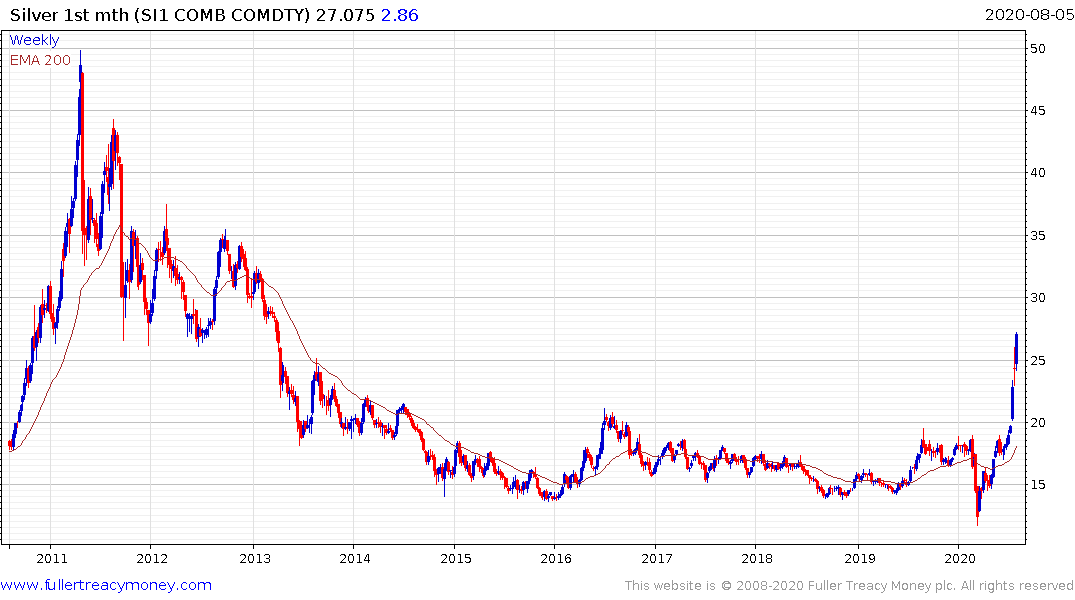 Silver is now, predictably, outperforming in a robust manner and broke out to new recovery highs today as it plays catch up following its recent base formation completion.