BASS: You know, the Chinese are in the worst financial situation they’ve been in, in the last 17 years because they operated domestic economy where they control the printing press, they control the press narrative, they control the price level and they control their people as we’ve seen them detain over a million of them in Jingjang for their religious preference. So they can change a lot of things domestically, but their -- the arbiter of the Chinese plan is their cross rate or their exchange rate with the rest of the world. China Inc.’s working capital account is now going South because they’re running what we believe to be a structural and more permanent deficit on the current account. And so, i.e., their working capital, their dollar balance whether it’s dollars, euros, yen or pounds, it’s mostly dollars. And their dollar balances is headed south. And so, the U.S. is in a very particularly interesting negotiating position today. We are in the strongest negotiating position we’ve ever had against China. They’ve kind of leveled the playing field a little bit more with their, let’s say, subversion of WTO rules, their intellectual property theft and basically everything they’ve done to take advantage of the U.S. over the past 15, 17 years.

China has the domestic economy on lock down and has an epic local government debt issue. It also has some of the largest deposits of any banking sector as well as large sovereign reserves. The only clear way to match liabilities with assets while also depreciating the currency to support the export sector is to avoid capital flight.

I was in Dubai and Singapore this week teaching The Chart Seminar for a large family office and we looked at a lot of banks. Two things really stand out. The first is that there is a high degree of commonality in the underperformance of the sector on a global basis. The second is that the best performing banking sector right now is China’s.

Banks are liquidity providers and therefore should do reasonably well when credit conditions are accommodative. The fact that they are under such pressure is representative of the fact that central banks are raising interest rates and tapering monetary largesse. Generally speaking banks should do better when interest rates rise because of better margins on their business but that is dependent on demand picking up too. 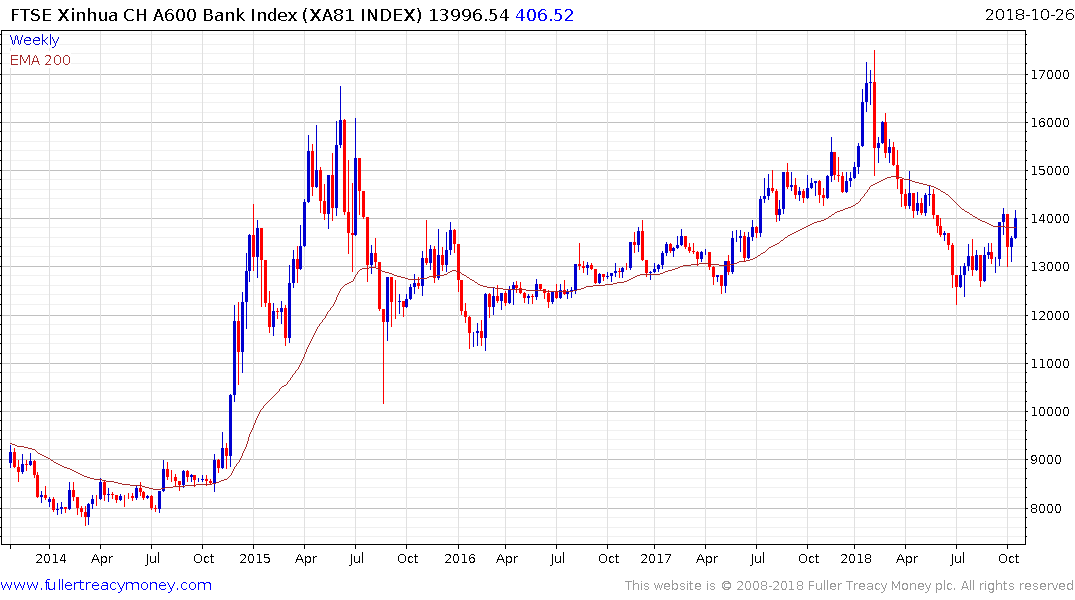 China’s expansion of the number of systemically important banks is a clear sign that support for the market is starting following what has been a very difficult period for the market this year. The cut to person taxes is also a good start but more overt support for the stock market beyond the banking sector is going to be required to really affect sentiment.

In the meantime the trade war is a clear reason to devalue the Renminbi which makes the case for overt support of the domestic economy all the more pressing because the lower the currency goes the greater the incentive to moves money overseas.