Has Arlene Foster Finally Overplayed Her Hand?
Comment of the Day

Has Arlene Foster Finally Overplayed Her Hand? by Eoin Treacy

The Brexit ultras in Johnson’s party, known as the Spartans, may be unionists, but their interests and those of the DUP have never been fully aligned. The Spartans want the hardest Brexit possible, and that’s their ultimate priority, rather than the exact form of customs arrangements between the mainland U.K. and Northern Ireland and how exactly consent is given for that by the DUP.

Johnson’s deal doesn’t look like it crosses any of the Spartans’ red lines. They haven’t said so far whether they’ll back him, but some of the noises ahead of the deal’s announcement were positive. They realize if a deal doesn’t pass now, there’s a chance Brexit may never happen. Secure their support, and it’s possible Johnson could win enough votes to pass his deal, as Bloomberg’s Rob Hutton outlined on Wednesday.

Much depends too on whether Brexit-supporting Labour MPs back a deal.

It may seem hard to imagine what the DUP gains from its opposition, other than burnishing its own Braveheart reputation by holding out. But the DUP plays a long game. They’re asking themselves whether the new arrangements, which include customs and regulatory checks on the Irish Sea border, will over time make it easier for Northern Ireland to drift toward unification with Ireland. They’re thinking about how unionist voters will regard their support for a deal that doesn’t give them an effective veto over the new arrangements, as Johnson’s original proposal did.

It is going to be a monumental task to get Boris Johnson’s deal through parliament without the assistance of the DUP. Unfortunately, the machinations of who votes in favour of the deal are unlikely to be purely in the national interest. Everyone knows an election is coming and parliamentarians are keenly aware that how they vote in this weekend’s question will probably come back to haunt them later.

The question is whether it is more politically expedient to support the deal, in the belief any deal is better than no deal and it is time to put the ordeal behind the country, or whether ideological loyalty will be better rewarded in the polls. That is a question every MP is weighing today. If Boris Johnson succeeds, where Theresa May failed, he will be on the front foot as he goes into an election. That alone is cause for Labour MPs to refuse to support the deal. 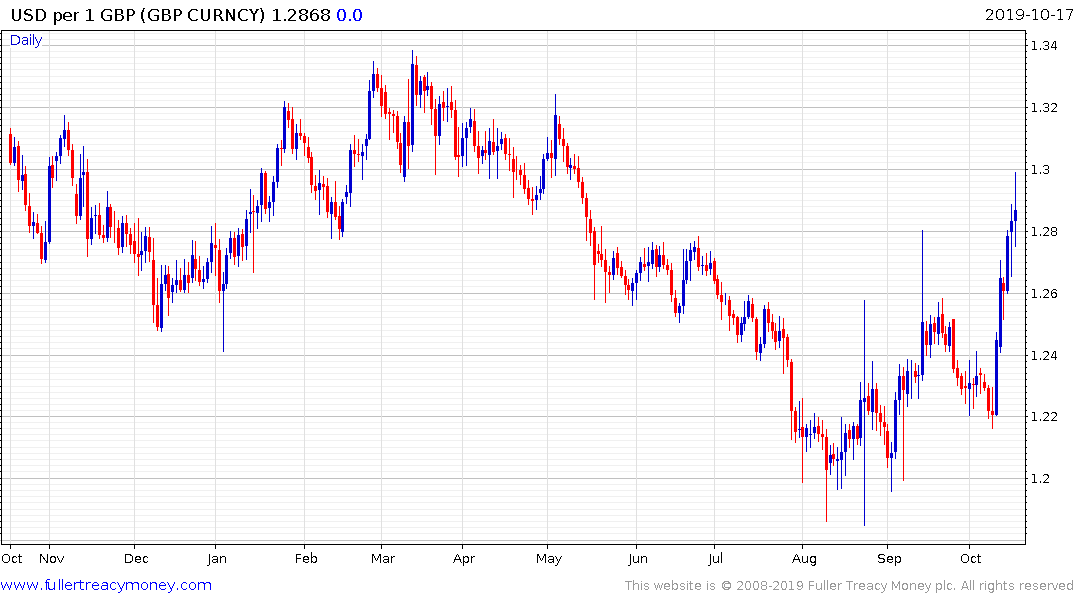 The Pound rallied by 8 cents in six sessions and paused today as traders weigh the risk of buying more with some much uncertainty heading into the weekend.