The first TLTROII operations will have a residual maturity falling below one year this summer, which may lead to a liquidity squeeze for certain euro area banks within a few months. Therefore, we expect it to be quite certain that the ECB will have another longerterm liquidity operation, which we expect to be announced in March and implemented in June ahead of the implementation of the new NSFR in July 2019.

The effectiveness of the operation will depend on the modalities and the devil will be in the detail. It is uncertain how the ECB will structure such an operation and consequently how large a take-up there will be. The crucial modalities include rate procedure, eligibility criteria, maturity. In ECB Research - TLTRO3: Italy to be main beneficiary, 9 November 2018, we argued that if the modalities were identical to the ‘carrot approach’ under TLTRO2, we could see an additional EUR100-150bn taken. However, with the recent comments from ECB President Mario Draghi at the December press conference, we are leaning towards similar terms as with the 2011/12 VLTRO operations

Step 2 – postpone the guidance on the first rate hike
The first easy choice indicating a change in policy direction is a postponement of the first rate hike beyond the current ‘at least through the summer of 2019’ language from the ECB. The ECB has been doing forward guidance in recent years, and so stronger guidance is not a new phenomenon or politically difficult to do. However, with the US slowing down and China likewise, a significant postponement of an ECB hike guidance could well also mean that the ECB will not be able to hike in this cycle – leaving less room for manoeuvre in a future recession.

However, markets have already re-priced ECB expectations and this measure would be likely to have a limited impact. If the next step were communicated as a cut, however, a marked impact should be expected.

The ECB had to abandon conventional Austrian doctrine and re-embark on quantitative easing in 2015, in large part to unwind the damage done to the region’s economy from withdrawing the first round of stimulus. The latest round of QE has just ended and the German economy is on the cusp of at least a technical recession, France and Italy are already embarking on fiscal stimulus and the banking sector is in a shambles. It is only a matter of time before another ECB volte face. 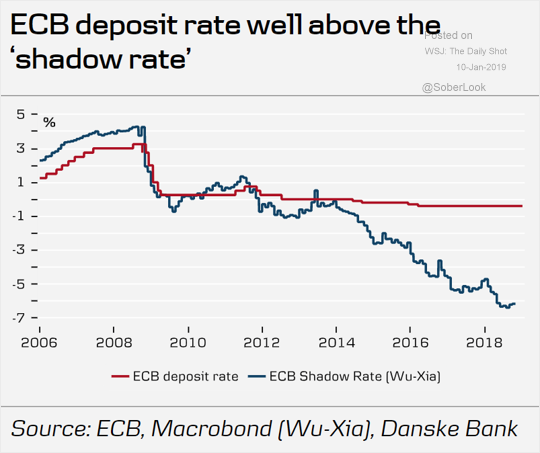 This chart of ECB’s Shadow Banking rate suggests that if they had not engaged in quantitative easing deposit rates would need to be -6%. That’s about the clearest indictment of the Eurozone’s response to the debt crisis I have seen. Defaults, write-offs and recapitalization is the only way to get out from under the kind of debt overhand the Eurozone is still dealing with. That is politically untenable given the national competition and perceptions between the creditors and debtors within the zone so the debt binge continues. The ECB is technically insolvent but that’s irrelevant as long as Germany and other countries see the cost of leaving as being too high to bear voluntarily.

However, if the ECB is going to have to embark on additional stimulus and the region’s governments are increasingly getting a taste for fiscal stimulus, it is hard to make a bullish argument for the Euro. The Bloomberg Euro Index has held a progression of lower major rally highs since 2008 and is now testing that sequence. It has been paused in the region of the 900 level, which has offered support on multiple occasions since late 2017 and will need to continue to bounce from this area if the medium-term downtrend is not to be reasserted. 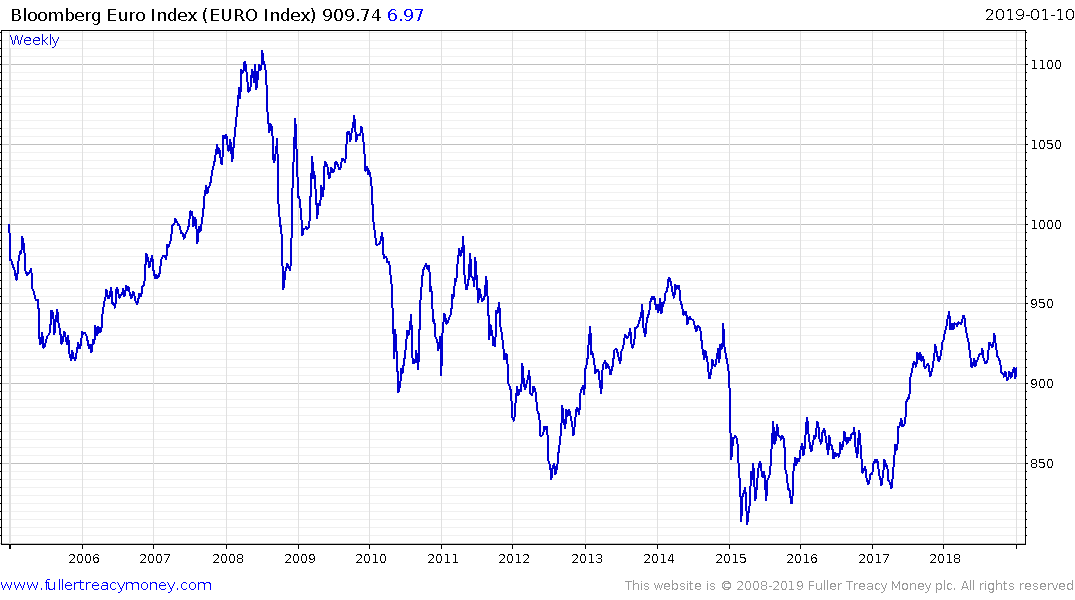 The consensus among institutional investors is the Dollar is going to weaken this year but that conclusion begs the question against what? The MSCI Emerging Markets Currency Index has at least rallied enough to trade back above its trend mean. That index is weighted exactly the same as the MSCI Emerging Markets Index and therefore holds a lot of Renminbi.