“That’s one of the reasons why yields are not just going to explode on the upside,” Gundlach, who oversees $50 billion as the co-founder and chief executive officer of DoubleLine Capital LP, said in a May 7 interview with Tom Keene from Bloomberg’s headquarters in New York. “Part of this equation is the demand for income from the growing number of retirees.”

The fall in labour force participation has been one of the main reasons the Fed has put less focus on unemployment statistics in making monetary policy decisions. The so called “grey tide” of baby boomers retiring has been a news item for years. As more people move to fixed incomes, they will learn how effectively their pensions have been managed and many will quickly come to understand that 10-year yields below 3% do not represent value. This is particularly poignant as the Fed tapers because it has removed the momentum trader from the market in just about every issue with a maturity of less than 30 years. 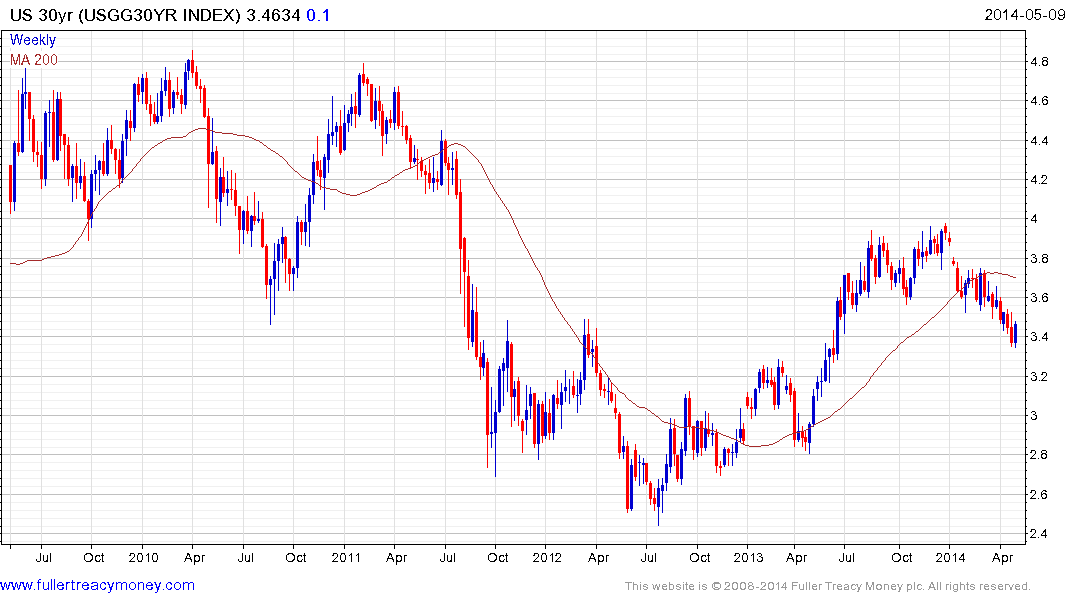 Even in 30-year yields, which had seen the greatest recent compression, rates have now risen to test the progression of lower rally highs evident since early January. A sustained move above 3.6% would confirm more than temporary support in the region of the upper side of the late 2011 through early 2013 base.

To say that yields will not surge higher because of retiring baby boomers is to misunderstand the behavioural nature of markets. At The Chart Seminar we explain why a range is an explosion waiting to happen. The often gradual process whereby supply is thinned out above the range and demand below creates the conditions for a breakout to occur. Once this occurs, the breakout unleashes new sources of supply or demand that help to propel the move.

We can make logical arguments for why demand for bonds will remain a constant bullish factor. However the fate of any secular trend becomes increasingly dependent on the marginal buyer as it matures. The Fed has become an increasingly important marginal buyer of Treasury and mortgage bonds. The central bank’s actions are likely to be the determining factor in how the trend unfolds.