Gundlach Disagrees with Mnuchin and Powell
Comment of the Day

Gundlach Disagrees with Mnuchin and Powell by Eoin Treacy

He said that deficits have historically shrunk in non-recessionary periods and risen during recessions. “We are late in the economic cycle,” he said, “and it is unusual that the deficit is expanding.” He said that this is driven by political reasons, and noted that the fact that we are adding stimulus “has never happened before.”

Deficit problems will move to the forefront by the end of this year, he said. The deficit is getting a lot worse and there will be “a lot of bonds supplied to the market,” he said. The supply of bonds was about $650 to $700 billion in 2017, he said. It will be $1.2 to $1.3 trillion in 2018, in addition to quantitative tightening (QT) as the Fed contracts its balance sheet, according to Gundlach. There could be another $600 billion in tightening, he added.

If there is a recession the deficit will get worse, he said, but QT will stop. Either way, investors should expect $2 trillion in supply.

”If quantitative easing (QE) was a tailwind for financial assets, then QT must necessarily be a headwind,” he said.

The unique conditions that prevailed in 2017 are over, Gundlach said. The VIX is above 17, he said, which is higher than at any time in 2017. “We have lived the entire last month and a half at VIX levels higher than in 2017,” Gundlach said. As a result, the markets turned in the greatest Sharpe ratio ever in 2017, but he said that has flipped in 2018.

“We’ve gone from an easy to a very tough investing environment,” Gundlach said.

Gundlach predicted that the S&P 500 will have a negative rate-of-return this year. “My conviction is high,” he said, “higher than that the 10-year yield will break to the upside.

Here is a link to the full deck of Gundlach’s slides. 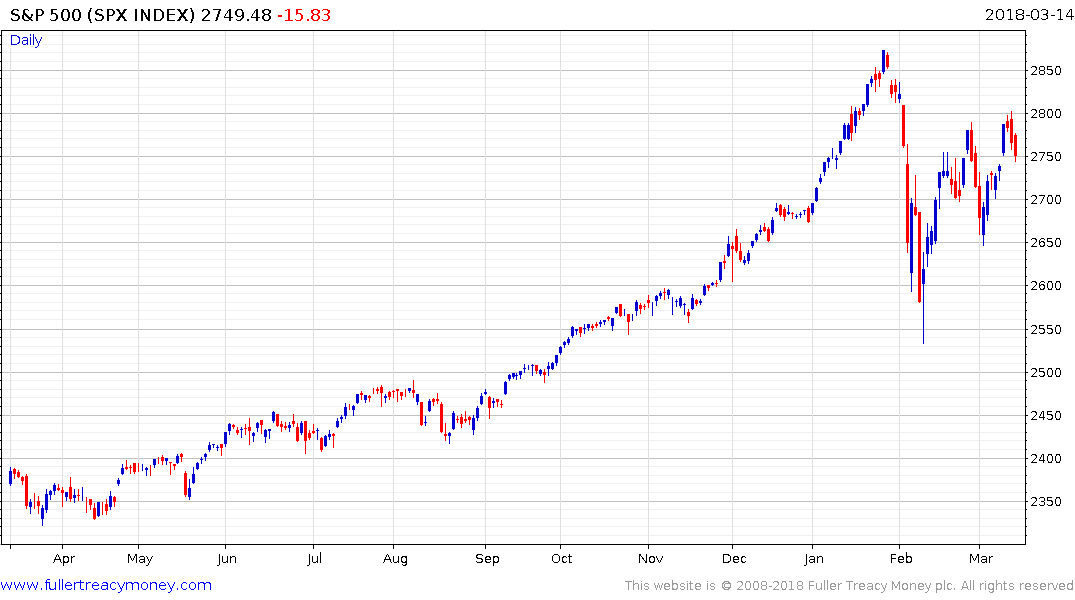 The S&P500 is currently up 2.88% this year but it hit at least a near-term and potentially medium-term peak in January following a brief acceleration of the two-year uptrend.

I continue to contend that the most likely scenario for the Index is continued ranging which would allow some convalescence following the sharp reaction against the trend in early February. Meanwhile Technology accounts for approximately a quarter of the Index. 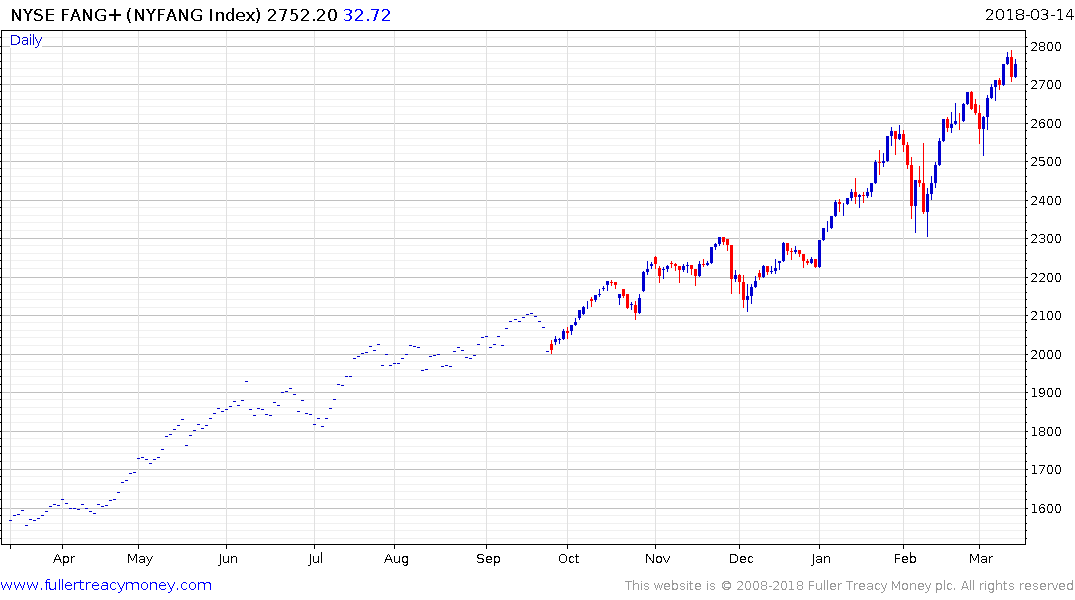 The NYSE FANG+ Index is comprised of Netflix, Twitter, Amazon, Nvidia, Baidu, Alibaba, Alphabet, Apple, Facebook and Tesla, in that order, on an equal-dollar weighted basis. The Index remains in a steep upward trajectory representing continued concentration of interest in a small number of mega- cap technology-oriented shares. 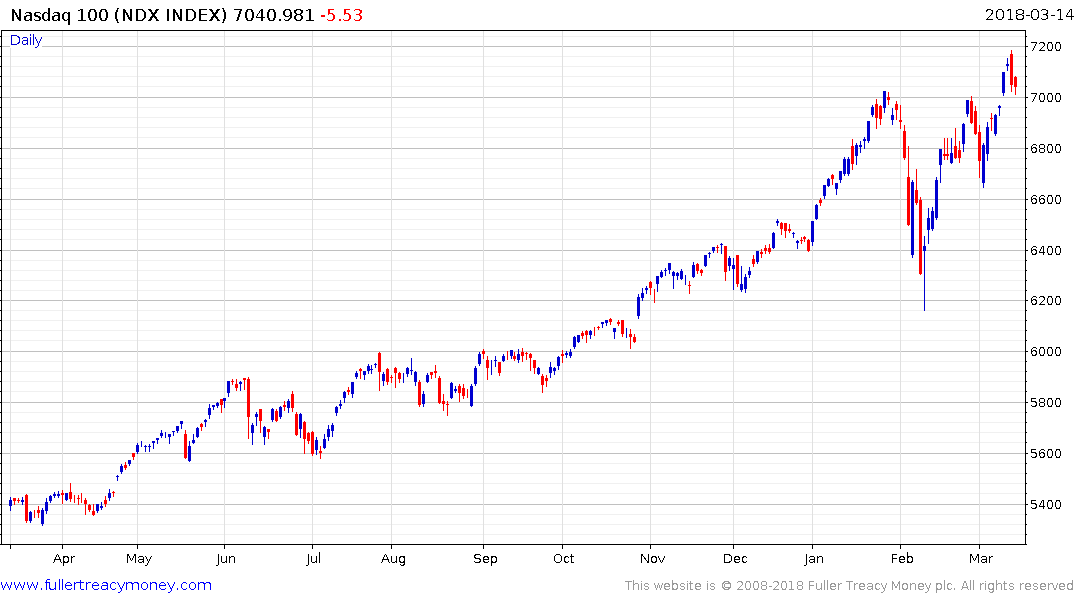 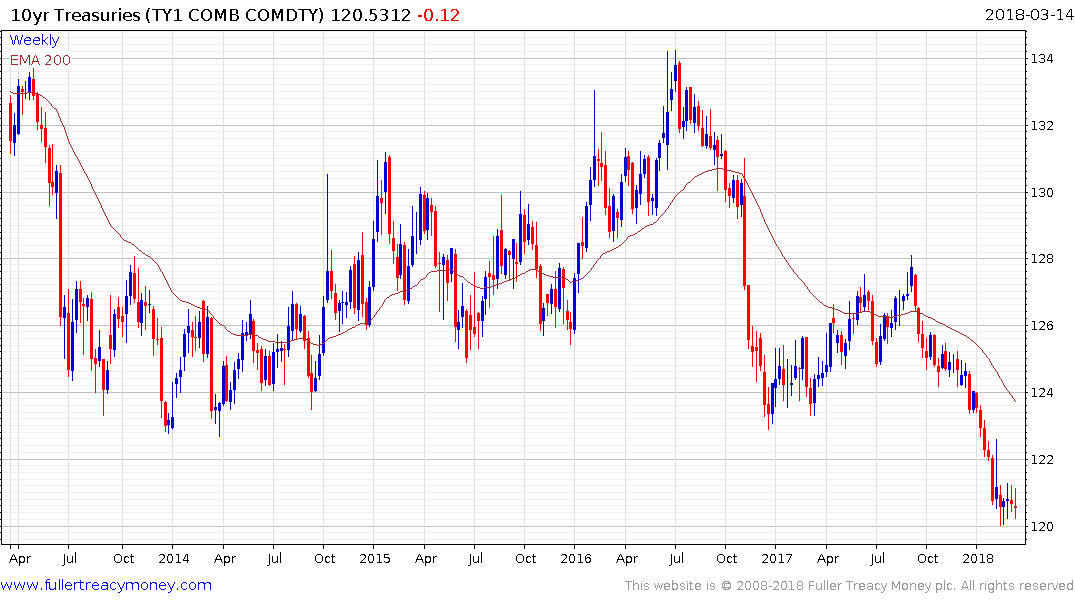 Against that background Treasury prices have paused near 120 and are firming. A deep short-term oversold condition remains evident and there is continued scope for a reversion towards the mean. I doubt the price capable or anything more than a short covering rally considering the burden of $2 trillion in an additional supply, and that the base formation in yields will likely be completed at some point this year.