Guide to the 2020 Elections by Eoin Treacy

We view the congressional contests as nearly as important in shaping the Washington power balance as the vote for the top post. The House of Representatives seems safely Democratic. The required net gain of 18 seats for a GOP majority appears out of reach.5

However, increasingly rare split tickets culminated in a clean sweep of all 34 Senate races by the winning party in the presidential election of 2016.6 A similar correlation is shaping up again for 2020. Presidential polls have moved toward Biden, and a recent Cook Report estimates that  1) 6 of the 23 Republican seats up for election are toss-ups and 1 leans toward the Democrats; and 2) no Democratic seats are toss-ups and just one of the 12 exposed Democratic seats leans Republican.7 These numbers could shift if President Trump regains the upper hand.

We expect only a muted market reaction to any delays in reporting due to voting by mail, much like the market’s limited reaction to post-election limbo in November and December 2000.8 Turnout remains tough to predict. Since 1960, a turnout of 56% or more of the eligible voters has coincided with one-party government (see Chart 2 below). Biden must balance his outreach to progressives during the final weeks of the campaign, to energize his campaign and to boost voter turnout, against alienating moderates inside and outside his party.

One factor to watch in 2021 will be whether the Senate votes to end the filibuster, a 60-vote procedural hurdle. We acknowledge the risk that the Senate may abolish the filibuster but still expect divisions between moderates and progressives within the Democratic Party to prevent policy swings to ideological extremes. Consequently, the most divisive proposals from the campaign trail seem unlikely to become laws.

Back in 2000 the world was mesmerized by the question of whether “hanging chads” should be counted as votes. In the end the Presidential election result hinged on only several hundred votes in Florida.

This year we are likely to see legal cases dominate races in a host of states. The question of mail-in voting is already topical. The US Postal Service is in no way prepared for the volume of mail it is going to be required to process over the coming seven weeks. Checking the identity and eligibility to vote of mail-in ballots is going to be time consuming at best. That is assuming most are valid and they arrive in time which is by no means guaranteed.

The influence on the market is open to debate. The massive social disruptions in response to the lockdowns and social justice movements have not influenced the market. That is because the monetary and fiscal authorities have been willing to supply unprecedented quantities of liquidity. There is ample scope for additional social unrest following the election.

The big question therefore is whether the liquidity taps will remain wide open. The 2nd fiscal stimulus package has not been agreed while the Federal Reserve appears to be biding its time in supply additional liquidity. 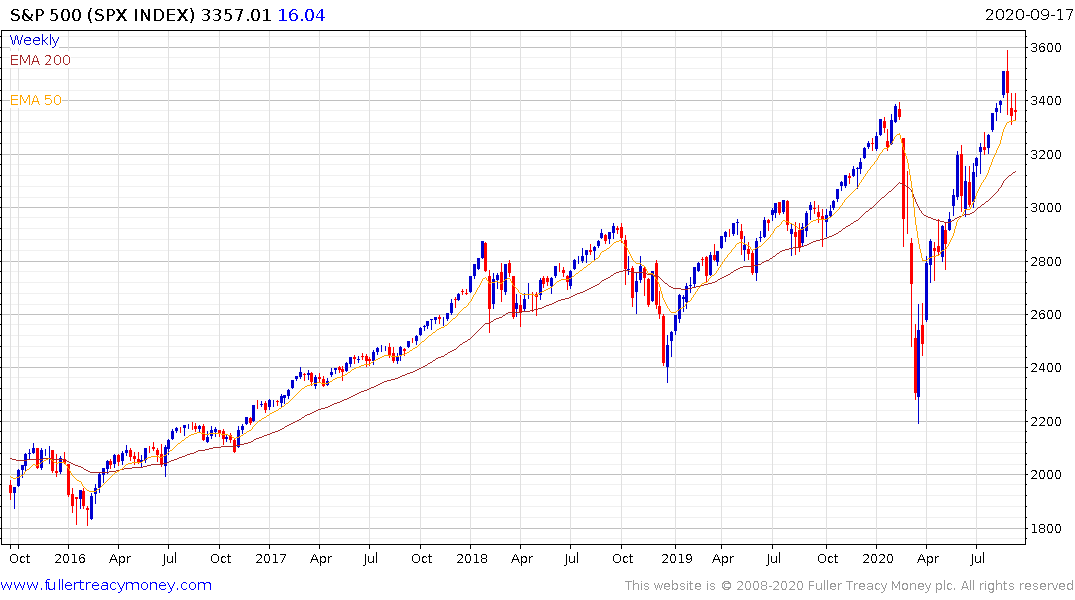 The S&P500 is back testing the region of 50-day MA and will need to bounce soon if a deeper and lengthier correction is to be avoided.