The aging population is pushing up the insolvency dates of the major trust funds that many seniors reply on. The CRFB now sees the Medicare Hospital Insurance trust fund going bust by 2023, and the combined Social Security trust funds depleted by 2031.

Almost 13 million Americans are older than 80, and the number of centenarians almost doubled from 2010 to more than 100,000 last year, according to the data.

In 2019, the dependency ratio showed that for every 100 people of working age, there were almost 54 other Americans potentially needing support.

The age group most at risk from the coronavirus is well reported to be the over 60s. This group staying at work beyond the traditional retirement age was one of the primary reasons the US economy was able to contain inflation despite peak employment and a rising participation rate. If many of these people fail to return to work, they go from being contributors to beneficiaries of state supports.

The big question is whether companies will accelerate hiring and promotion of younger people or will they invest in additional technological solutions to reduce head count. All evidence points towards the latter solution. 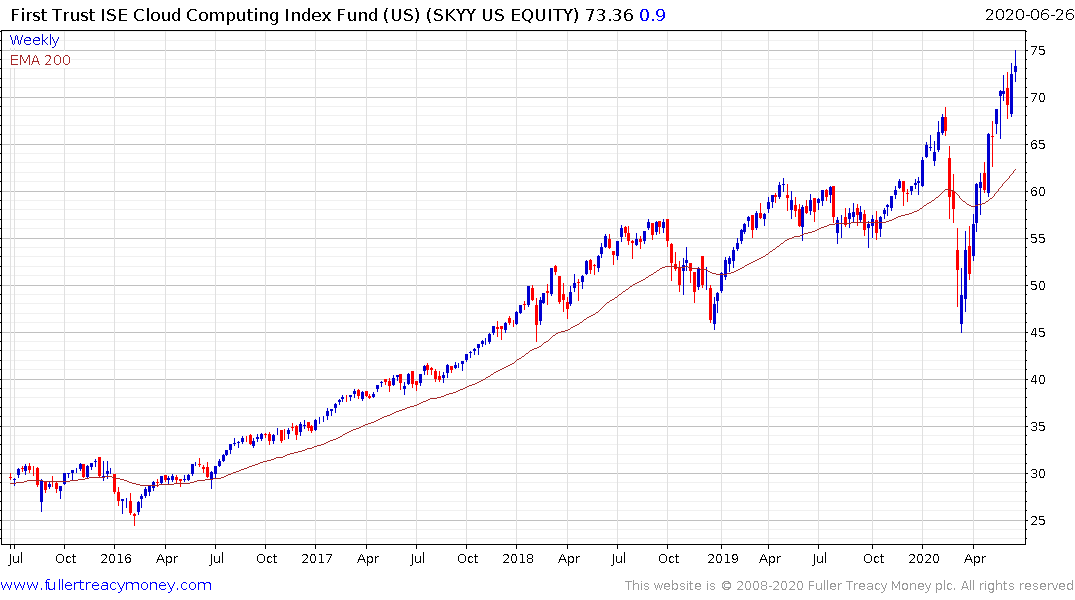 The Cloud Computing ETF might be short-term overbought but its relative strength has been truly exceptional.

Meanwhile there is the clear potential for taxes to rise across the board to fund pension obligations and that burden is likely to fall on an increasingly narrow band of the population. The theme for the coming decade is likely to be some form of generation war since many younger people will be funding benefits, they have no hope of ever receiving themselves. That is likely to be one of the most divisive of all political evolutions in a generation.

This article highlights the issue is also likely to be a significant factor in the UK.