Once countries have basic housing for the poor and an urban economy has installed the infrastructure to begin to grow, there is an increase in wealth, GDP and income per capita. This allows for a move from public housing to suburbanise into single unit family homes, something witnessed in many developed economies across the world. In the UK, the overall number of ‘housing starts’ has stayed largely flat since the 1970s, but the housing mix has changed from public to private homes. At the same time, timber consumption has increased as, on average, a single-family suburban home uses around three times the timber of a multi-family unit.

The result is that even when total new housing starts begin to level off, timber consumption increases again in the mature stage of an economy, leading to a third wave of timber construction. Not only is more timber used in single unit homes, the home improvements sector becomes a significant additional source of timber demand. In the US and developed world it contributes circa 35% of all consumption by the construction industry.

The big question for timber consumption in the medium-term is whether the trend of migration from cities to the suburbs will continue post COVID-19. The desire to exit population dense regions during the pandemic was understandable and not least because of the widespread public disobedience that characterised the lockdowns. The big question is whether that migration will be sticky. We do not yet know how long people will be happy working from home or whether they will miss the buzz of the city. 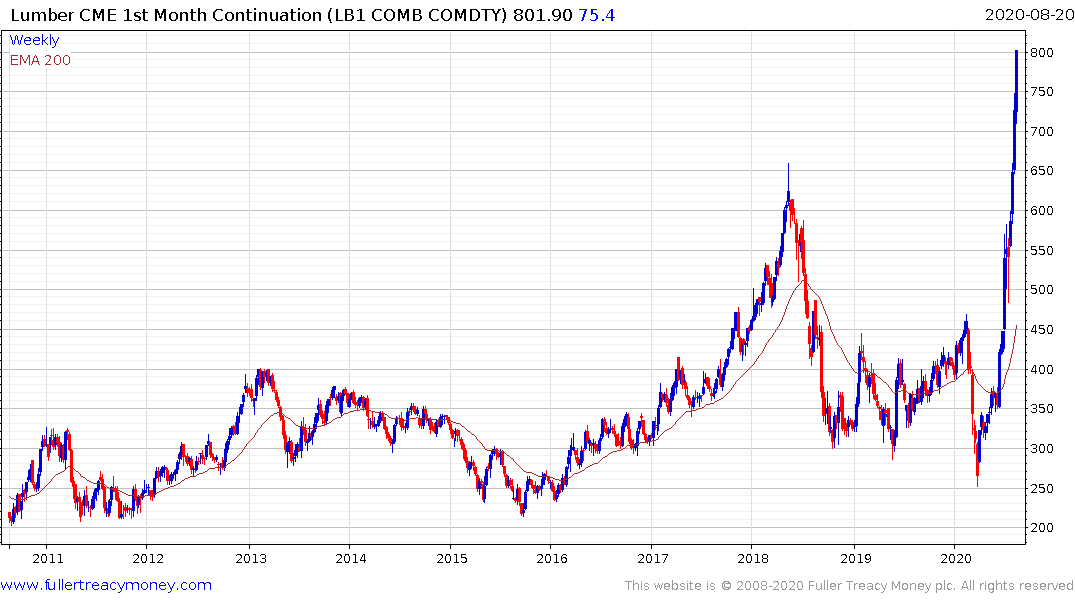 Lumber prices are accelerating higher and have doubled in only a few months. That will eventually encourage new supply into the market but a clear downward dynamic will be required to check the advance. The proliferation of mountain pine beetles a decade ago has led to a dearth of supply from the Pacific Northwest. Today most logging takes place in the USA’s southeast.

In the short term it will lead to higher prices for new builds. That is in addition to the demand for bigger houses which allow for remote work and schooling. Eventually people will need to make a determination whether the cost of maintaining large residences and paying the additional taxes is viable. 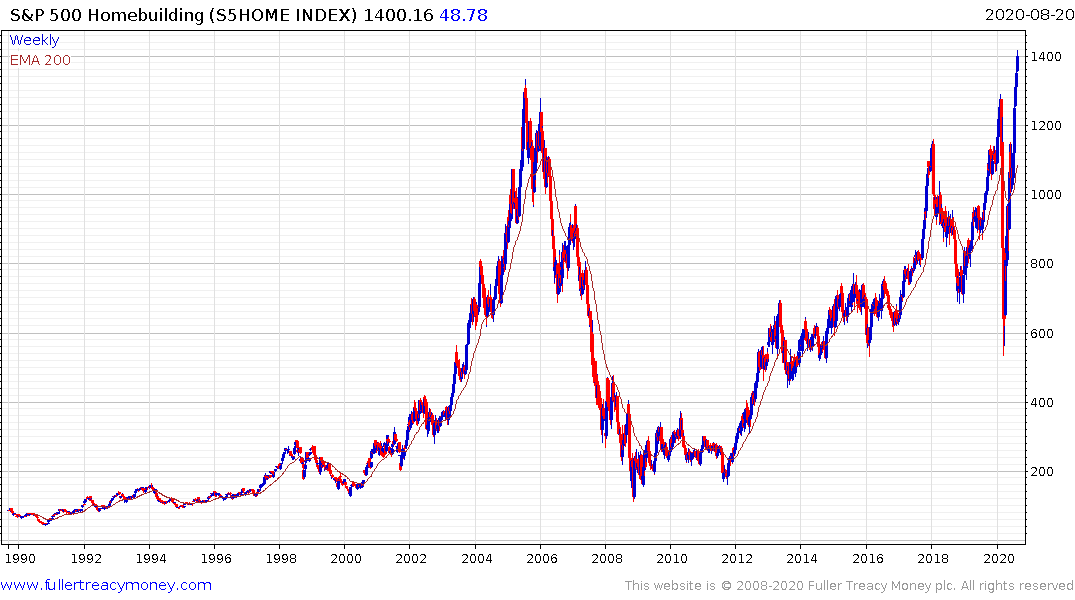 The S&P500 Homebuilders Index continues to extend its breakout to new all-time highs. In the aftermath of the credit crisis, that is condition I don’t anyone was expecting. 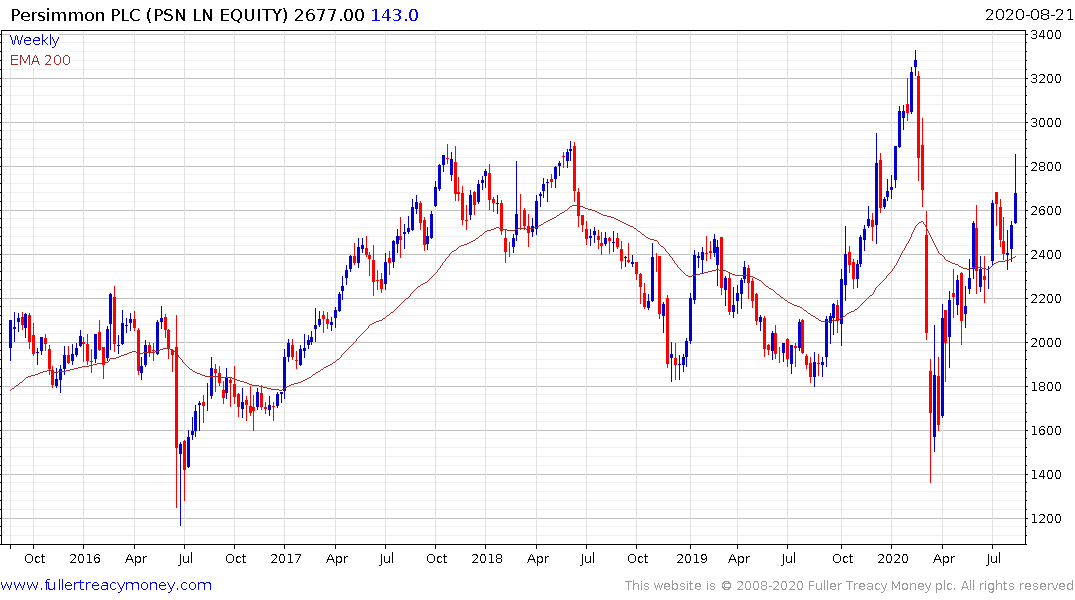 In the UK Persimmon continues to hold a sequence of higher reaction lows. 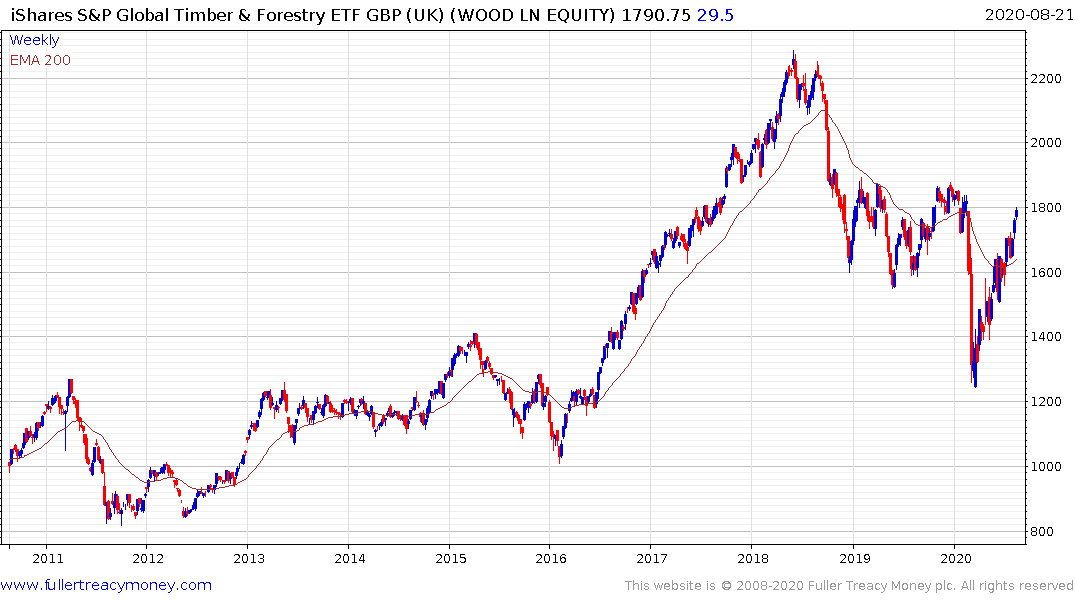 Generally speaking, the investment trusts in the UK offering exposure to timber assets have not performed well over the last decade. The timber products company ETFs have done better.