In the weeks before the GLBL initial public offering, SUNE was at its highs and we contemplated trimming the position. Since we expected the UOI would trigger a further advance in the shares, we decided against it. Around the same time, oil and gas prices renewed their declines, causing the values of energy master limited partnerships to justifiably fall. We believed that TERP and GLBL would not be impacted, as neither is subject to commodity risk. We were wrong. Because the SUNE yield vehicles were relatively new to investors, the market did not distinguish them from other energy dividend flow through structures. In mi-July, TERP began falling along with the rest of the sector taking SUNE with it. GLBL IPO’d at a big discount a week later and traded poorly in the aftermarket.

?As GLBL and TERP continued to fall they effectively lost access to the capital markets, and SUNE collapsed as the market because worried that SUNE would be able to sell its projects and could even run out of money. Ironically, the market judged SUNE’s rapidly growing and massive backlog of attractive projects to be a liability.

SUNE’s hard-to-decipher financial statements fed the stock collapse. SUNE consolidates both TERP and GLBL on its GAAP statements. The complicating result is two-fold. First when SUNE sells a project to TERP or GLBL it bears the operating costs but doesn’t get to book the revenue from the sale. The result is the appearance of an operating loss. Second TERP and GLBL use non-recourse project finance debt to fund the purchases and the debt appears on SUNE’s balance sheet. The result is that SUNE appears to be heavily levered and losing money. From a GAAP perspective that’s true, but from an economic perspective it is not. Nonetheless, this hasn’t stopped some wise guys from dubbing it “SunEnron”.

SUNE responded to the deteriorating environment by raising additional equity, finding third parties to buy its products, and slowing it development pipeline. All of these actions have marginally lowered the company’s value, but have stabilized the situation. Taking into account the more conservative business plan, when we look through the complicated financials we believe that SUNE’s development business is poised to have economic earnings in 2016 of about $1.34 per share, assuming that TERP and GLBL do not regain access to the capital markets.

In the movable feast of renewable energy breakeven estimates it’s hard to argue that lower oil and particularly natural gas prices skew the calculation. Solar technology is advancing at a prodigious rate but not so fast that companies can compete with energy prices which more than halved in a year. This has weighed on the sector in the short term but it is hard to argue with government mandates that utilities have to buy energy from renewable sources. 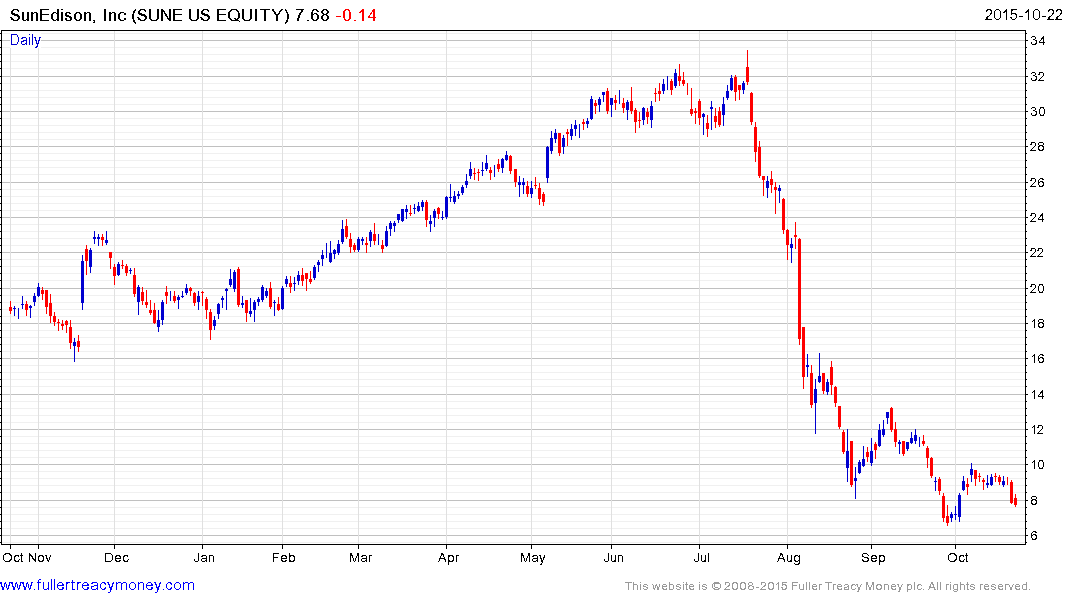 SunEdison has lost downward momentum but needs to break the progression of lower rally highs to signal a return to demand dominance beyond the short term. 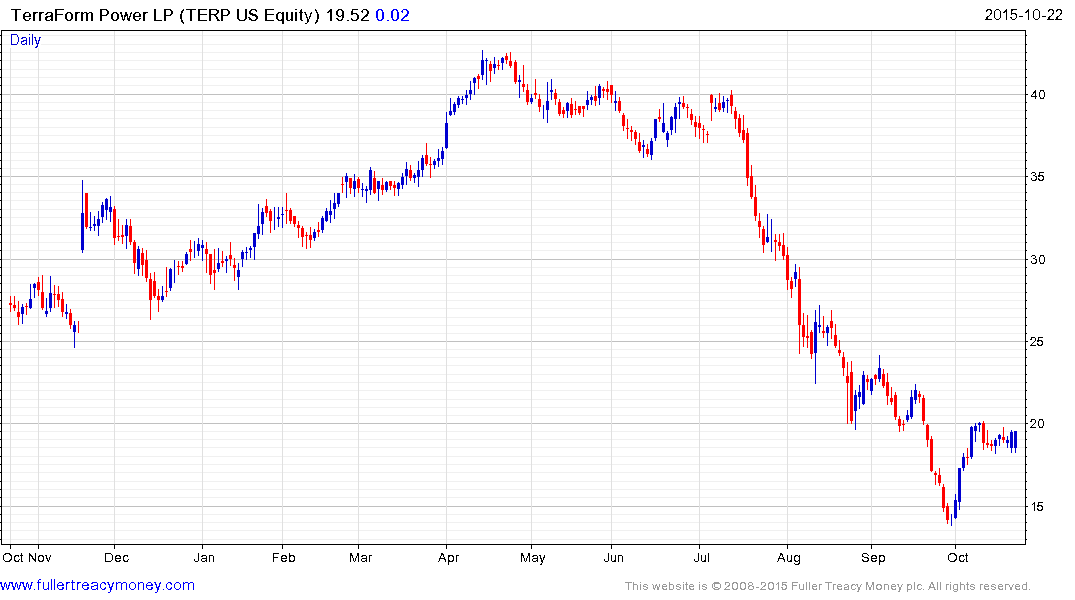 TerraForm Power LP with an almost 7% yield bounced from the S15 area earlier this month and the benefit of the doubt can be given to a reversionary rally provided it continues to hold above the low. 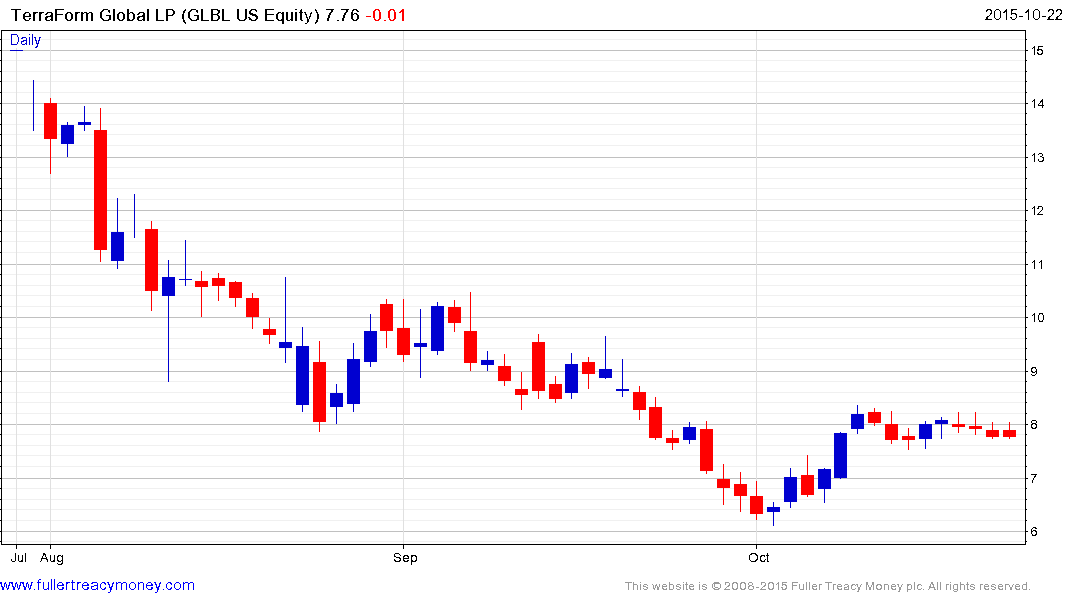 TerraForm Global LP with operations in China, India and South Africa is not estimated to turn revenue positive until at least next year and as a result does not yet pay a dividend. The share bounced from the $6 area earlier this month but will need to hold that level if support building is to be given the benefit of the doubt.

To the extent utilities are mandated to accept power from renewable sources, they still need to burn coal and natural gas in order to meet base load requirements. Coal has taken on pariah status as regulations become progressively stricter and yet it is still one of the largest sources of fuel for power stations and this is unlikely to change in the short term. 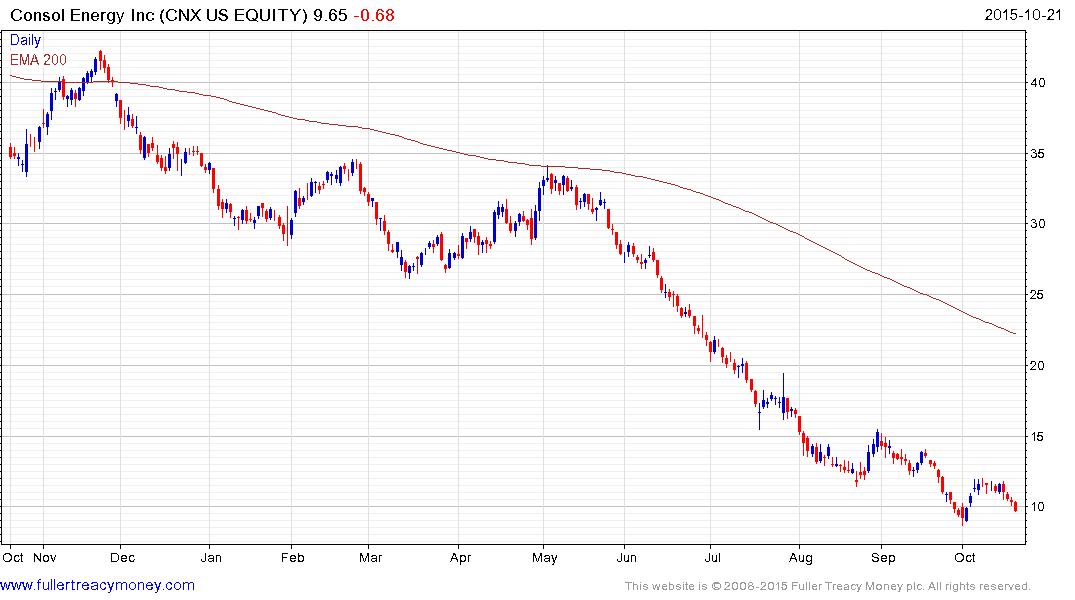 Consol Energy has paused in the region of $10 but will need to rally enough to break the progression of lower rally highs to signal short covering and a possible return to demand dominance.