The dollar is heading into the year-end vulnerable to a sharp extension of the bear run that’s shaped global currency markets since March.

Long-term trends on technical charts stretching back over the past decade reveal multiple trigger points that could see the greenback shoot lower against a host of key currencies.

This article reflects the deep negative sentiment currently being expressed by investors everywhere. The Dollar has done little but fall since March. It has lost its interest rate advantage and supply is abundant by any definition. The US government is also calling out countries because their currencies are not rising quickly enough against it. In the competitive world of currency markets, the USA is doing more than most to devalue its currency.

The other side of the argument is the Dollar is a safe haven asset. More recently it has also become the carry trade funding currency of choice for exactly the reasons outlined in the above paragraph. It is a cheap currency, with lots of liquidity and a downward trend which can easily be invested in other assets with uptrends, higher growth and capital appreciation. 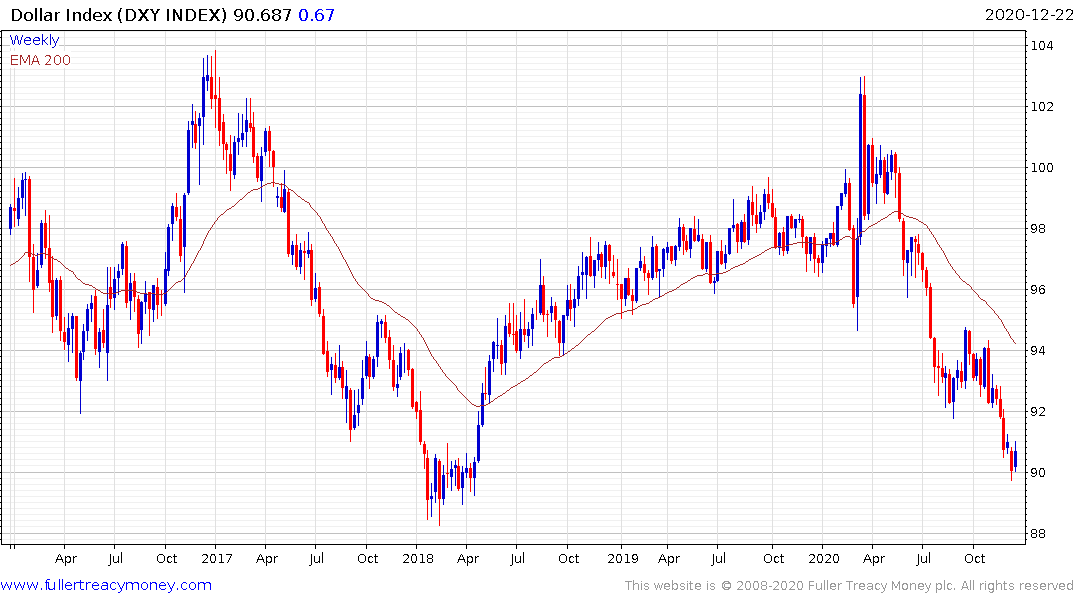 That suggests global markets are more sensitive to the Dollar’s swings than has been the case in years. The Dollar Index rebounded today following yesterday’s volatility and some further unwinding of the short-term oversold condition appears likely. That suggests there is ample scope for further strength and heightened volatility heading into the quiet time between Christmas and New Year. 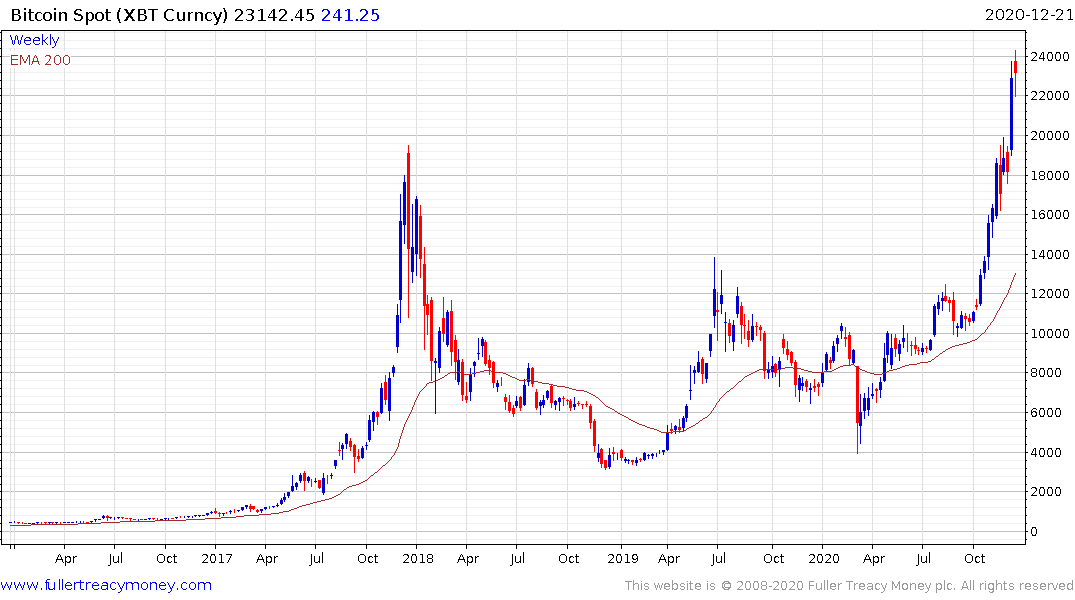 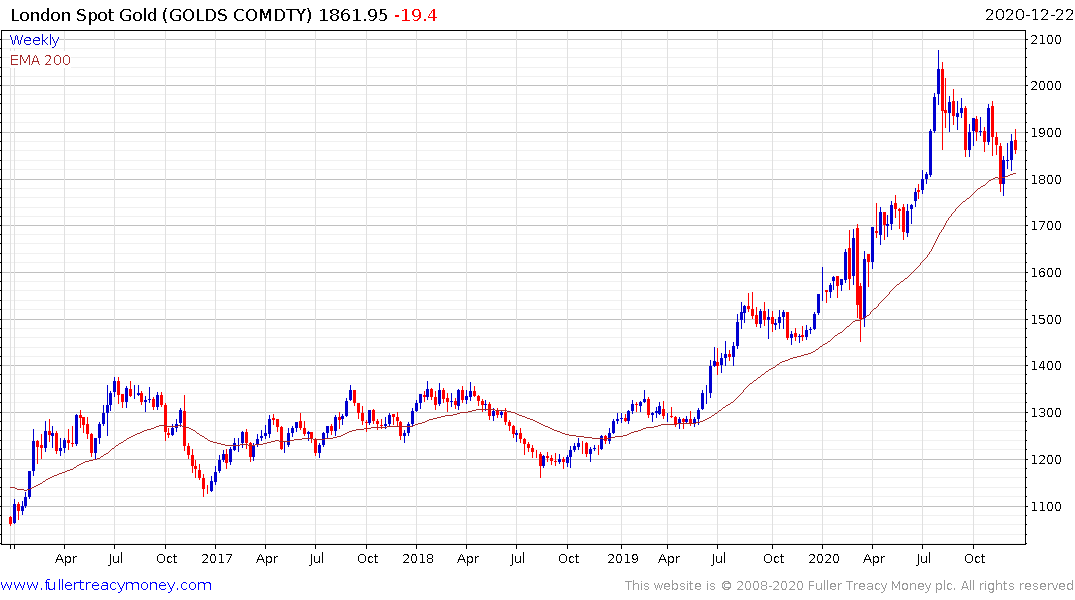 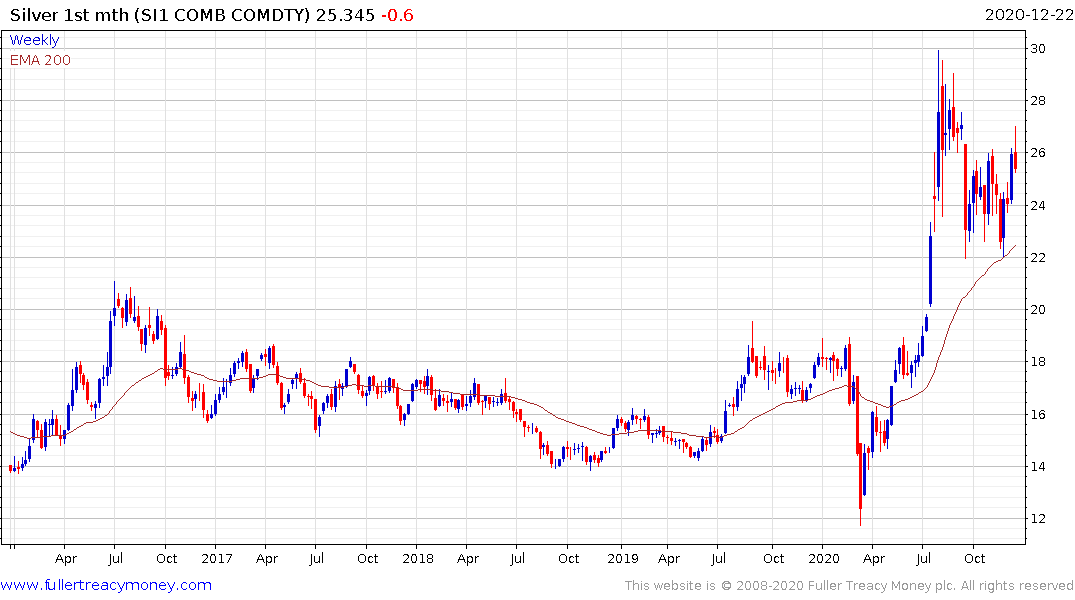 That’s a particular risk for the assets have done best over the last few months. Bitcoin has so far been steady in the region of $25,000 but both gold and silver are pausing in the region of recent peaks. 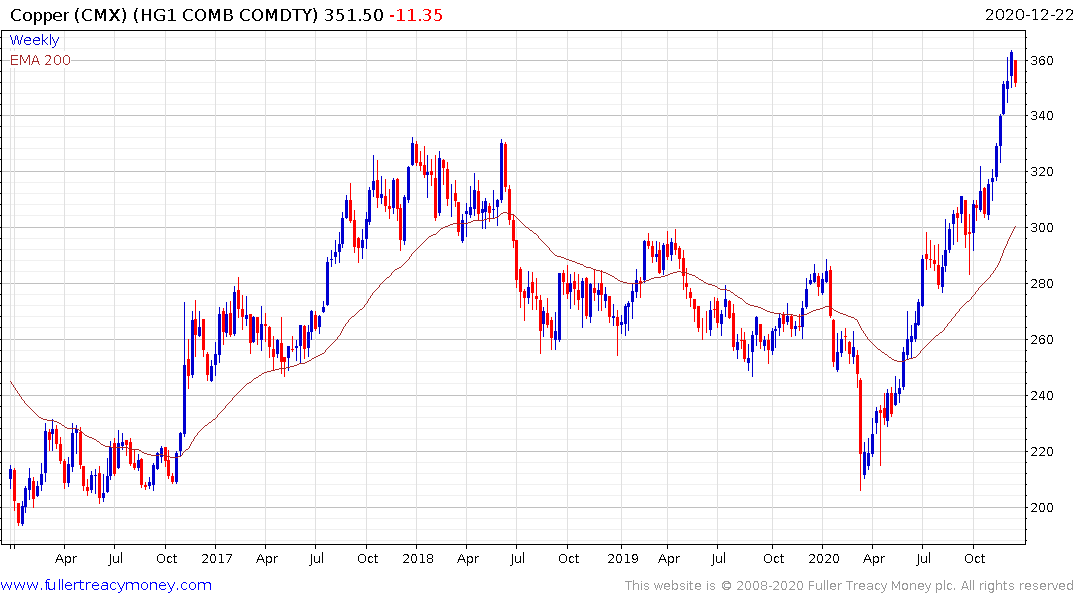 Copper is also susceptible to some consolidation of recent gains since its uptrend has mirrored the Dollar’s downtrend.

An additional point that is worth considering is the potential Santa Claus rally has been highly publicised this year. I don’t remember it being so popular in years past. It’s lack of popularity was one of the primary reasons it was a productive strategy.

One thing that was particularly clear in November is the beaten down shares which were the year’s worst performers rallied earlier this year than is normal. Generally speaking, the rotation into underperfomers occurs in the last first week of the near year. The introduction of vaccines in November was the catalyst for a significant short covering rally which boosted just about everything and accelerated the timing for bargain hunting and tax selling. .

With Wall Street at an all-time high last week, the question is whether this desire for a bounce over the coming weeks is a sign of how sensitive highly leveraged traders are. Call option volume is still very elevated; suggesting a lot of exposure.